Neither of them had any entrepreneurial history before they met. Abe Fetterman was a plasma physics Ph.D. at Princeton and Lisa Qiu had worked in hospitality at Jean-Georges and Mario Batali before entering the magazine world.

But while watching Top Chef episodes during their first week of dating, they clicked.

Lisa, who was working around some of the most elite chefs in the world, saw an immersion circulator on a Top Chef episode. These devices are used to cook with the “sous-vide” method, where food is vacuum sealed and slow-cooked in a water bath to a precise and even temperature. High-end chefs have raved that sous-vide helps them create perfectly cooked food, like steaks where the core is evenly rare without having burnt exteriors.

She confessed that she would have loved to have had one.

But at the time, sous-vide machines cost well over $1,000, which was far out of reach for an admittedly money-poor grad student and associate magazine editor in Manhattan.

So Abe gallantly offered to make one with off-the-shelf parts for about $50.

It was the beginning of a partnership that would spawn a company, a family and an adventure through the factories of Shenzhen, DIY workshops in the Lower East Side and then Silicon Valley. Ultimately, the now-married couple wants to start a home-cooking revolution where the once avant-garde technique of sous-vide becomes cheap and easy for everyone.

They just released the Nomiku, which is the product of well over a year’s work and has a pre-order price of $299.95. It’s a home sous-vide machine that you can plop into a bucket of water, and then turn a knob to an exact temperature. It then circulates water around whatever it is that you’re working on — be it eggs or salmon in a bag.

“Nomiku is all about modernizing your whole kitchen,” Lisa said. “We see the kitchen as a home manufacturing center. It should be both clean and beautiful.”

She went on, “When we started, the cheapest immersion circulator was $1,000. We completely disrupted the whole market and we’re making a whole, completely new one.”

Not long after Abe made a DIY sous-vide machine, they started running workshops in Lower Manhattan for other hobbyists and chefs who wanted to hack their kitchen appliances.

Eventually, they came up with an idea to create an affordable sous-vide machine — something that would be way easier for regular people than the kitchen appliance hacks they had been teaching. To put their project in motion, they joined a cross-border hardware accelerator that links San Francisco and Shenzhen called HAXLR8R.

While getting totally burned out designing the product and negotiating with suppliers, they took a vacation to Thailand where they reconnected with a former Momofuku line chef named Wipop Bam Suppipat, who had taken some of their Manhattan DIY workshops.

Luckily enough, he turned out to be an RISD grad with a degree in industrial design. They spent days together talking non-stop about the product until the point where it became a no-brainer for Suppipat to join as the third co-founder.

Last July, they ran a Kickstarter campaign that raised the most out of any other proposal in the food category.

With the $586,000 they raised came the tough part, which involved working through all of the design and logistical issues necessary to create a functioning prototype.

“We got really really burned out,” Lisa said. “It was 24/7 with barely any sleep, working on a prototype every day.”

Even so, the trio had complementary skills. Lisa had the Mandarin necessary to negotiate with manufacturers and navigate the often frustrating local business culture, while Abe and Suppipat had the technical and design chops to create a prototype that was easy to use and cheaper to make.

“Abe is a genius. He did a lot of the magic,” Lisa said. “I don’t think you could’ve gone to Shenzhen and done this. But we had a good melange of mentors from HAXLR8R, I speak Mandarin and we used a lot of new technologies like 3D printers.”

They were able to build the initial Nomiku with about $20,000. Still, there were setbacks. They found that steam was leaking into the Nomiku’s motor system, creating the risk that the device would rust. They also had to secure a UL certification from a third-party lab to make sure the Nomiku was safe to retail in the U.S. 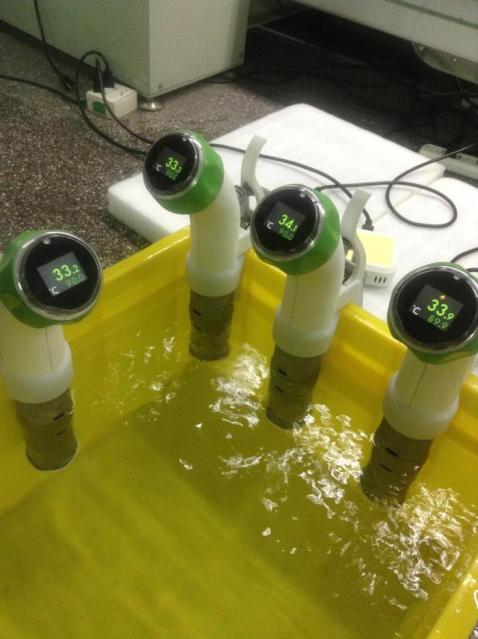 After a few months of production setbacks (which are pretty common for Kickstarter projects), they launched the Nomiku last month. They also raised a small seed round from angels, including i/o Ventures’ partners Paul and Dan Bragiel, Ligaya Tichy, who previously ran community for Airbnb, and former EA Popcap executive producer and Tilting Point co-founder Giordano Contestabile.

I ran a test of it side-by-side along some other DIY immersion circulators and a competing Anova product. (This is because when you host a sous-vide dinner in San Francisco, everyone offers to bring their own machine, even ones they built themselves).

We made vegetables like eggplant with harissa, Romanesco cauliflower with lemon and anchovies and asparagus with the Nomiku, while doing meats and eggs in the other devices.

I’m new to sous-vide cooking, but it did definitely improve the taste of eggs, shrimp and thicker cuts of salmon.

Nomiku faces competition from much bigger, well-funded competitors like Anova, a lab equipment company that migrated into making water bath products for cooks, and PolyScience, another similar competitor.

A more experienced sous-vide cook and Anova-using friend had the following feedback: he felt that Nomiku’s user experience was more intuitive with a rotating dial instead of a touchscreen. But he said that it lacked features like a timer and was slightly slower in getting the water bath to the appropriate temperature than the Anova.

Update: Nomiku said this difference is because their product uses a PTC heating element instead of a conventional coil heater like the Anova. The reason for this design choice is that PTC heating elements don’t burnt out and self-limits their power when they get too hot.

Nomiku’s heating has a slight heating curve from being a PTC element (the type that never burns out and self limits its power when too hot) versus the Anova with conventional coil heater.

“I don’t know what their strategy is and I’m not worried about them,” she said. “What we worry about is whether our customers are happy. Did they have a great experience? With every great idea you will have competitors. The only thing you can do is focus.”