The word “BlackBerry” did not come up during Facebooks Q3 earnings conference call yesterday, but you can see why such a crazy idea like the social network buying the beleaguered handset maker might have a sliver of plausibility to it. The company is moving closer to a tipping point where mobile usage and revenues will soon be outweighing that of desktop, and although Zuckerberg has ruled out the so-called “Facebook phone,” you never know how the company may want to capitalize on its mobile muscle in the future.

CEO Mark Zuckerberg today noted during the company’s earnings call that 48 percent of users on a given day are only accessing it from mobile. That comes as nearly half — 49 percent — of the company’s advertising revenues, its key revenue driver, now come from mobile ads. That means nearly $890 million in Q3 was made from Facebook’s different mobile advertising units such as app install ads and engagement ads. “It’s a pretty incredible sign of how Facebook has evolved in the past year,” he said.

This shows that Facebook is on track to match the prediction it made in Q2 that mobile revenues would pass desktop by the end of this year. And from the looks of it, the change of balance could come soon on mobile, too. Mobile continues to grow much faster for Facebook. Mobile MAUs grew by 45 percent over the last year (to 874 million in Q3 2013 from 604 million in Q2 2012) — these include both those who are using mobile exclusively for Facebook, and those who are using mobile at some point in the month in addition to desktop. That 45 percent works out to 2.5 times as much growth as MAUs overall, which were up 18 percent ($1,189 million in Q3 2013 and $1,007 million in Q3 2012).

Facebook points out its figures do not include Instagram-only usage, but during the call COO Sheryl Sandberg provided some striking figures that point to just how much time consumers are spending on Facebook’s mobile properties when you do add it in. Combined with Instagram, the very popular mobile-first, photo-based social network, Facebook now has 150 million monthly active users. It accounts for one of every five minutes spent on mobile in the U.S., Sandberg noted. And that is even having an impact on desktop: Facebook (again, with Instagram) account for one in 8 minutes on desktop, she said.

What does Facebook’s mobile traffic work out to compared to other popular properties? Sandberg noted that Facebook accounts for more mobile minutes in the U.S. than “YouTube, Pandora, Yahoo, Twitter, Pinterest, Tumblr, AOL, Snapchat and LinkedIn — combined.” (It seems that this stat was taken from comScore research, which actually combined Instagram and Facebook.)

Mobile-only users on a monthly basis now stand at 254 million, Facebook noted in one of the slides that accompanied its presentation. The full deck of those slides, which also spell out other metrics like MAUs and DAUs across mobile and desktop, is here. With 1.19 billion MAUs overall, it means that 21.3 percent of MAUs are now mobile-only. That is up 2.3 percentage points from 19 percent in Q2. 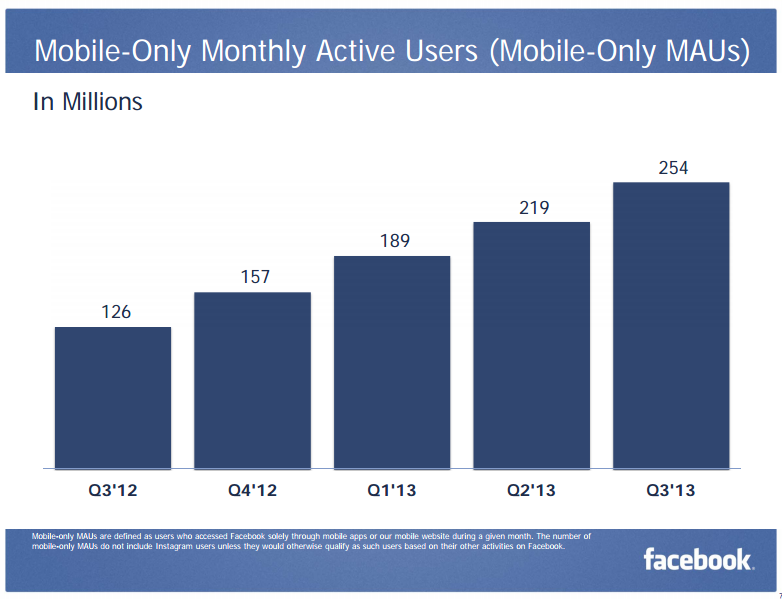