As my default Calendar replacement app, Fantastical has been on the home screen of my iPhone since its release nearly a year ago. As one of the few pieces of productivity software that I use regularly, I was extremely nervous about how the app was going to change with its iOS 7 update.

I shouldn’t have worried. Fantastical 2, out today, is one of the best examples of taking the opportunity presented by Apple’s iOS 7 update and using it for more than just a visual ‘re-skin’. It’s a fitting return for the only calendar app to have ever hit the #1 spot on Apple’s paid charts.

If you’re unfamiliar with Fantastical, its strengths are a natural language parsing engine that lets you dash off regular phrases like ‘meet with Joe at noon on Tuesday at The Crab Shack’ and end up with a fully inputted calendar entry without ever typing in any numbers. It’s clever and powerful and almost always works exactly how you want it to. This is coupled with a unique layout that places either a ‘day ticker’ of 1 week or a monthly calendar above a simple continuous agenda of appointments. 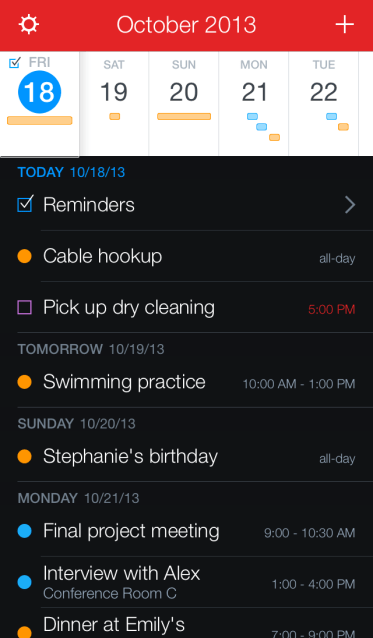 For the second time in as many weeks, we’ve seen a very popular app with a distinctive feel re-imagined for iOS 7 with great results. While it could be argued that Tweetbot had an even more pronounced visual language, Fantastical hit some notes pretty hard that it couldn’t have been easy to give up.

Flexibits’ Michael Simmons says that the decisions made in the re-working of the app went far beyond how to make the visual language of the app fit in with iOS 7. Yes, the staples along the top of the virtual ‘calendar’ are gone, but there are also deeper changes that make a real difference in how useful the app is.

One of the biggest examples of this is the trademark ‘lens’ that sits in the center of the ‘day ticker’ in Fantastical. The old design was very heavily influenced by a ‘real’ magnifying glass, of the type that you’d slide over a desk calendar or log book to read a certain entry. The new design retains some of the magnification aspects, but gets winnowed down visually so it doesn’t punch you in the eyeballs with its cleverness as much any more. But the design changes didn’t stop there. 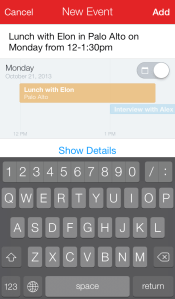 “We moved it to position one, so you can see the full week ahead,” says Simmons. He notes this as an example of one of the hard decisions that was made to make the app work better, rather than cling to the conventions established in the original. The added context of a couple of extra days ahead in the ticker is welcome, and a good choice.

There have been some other additions as well, background syncing is in full effect, making sure that appointments and reminders are at your fingertips when you open the app. Test Expander support has been added for keyboard shortcuts. It supports Apple’s dynamic text sizing for the trademark list of items. The customized keyboard in the event creation view now features an additional row of number keys for those times when you want to enter times or dates quickly without having to swap keyboard.

There is also now a beautifully expanded landscape week view, which animates in context to give you a bigger eye on your current week ahead.

And, at last, there is now extensive reminder support built right in to Fantastical.

The reminders support, says Simmons, goes far beyond adding support for ‘to do’ actions with tick boxes in the list view. The whole app was re-thought to make reminders an integral part of your calendar. Not only do you get color coded list options for completed and uncompleted reminders, the parser has also been customized, adding thousands of trigger words that let you automatically add items as reminders. 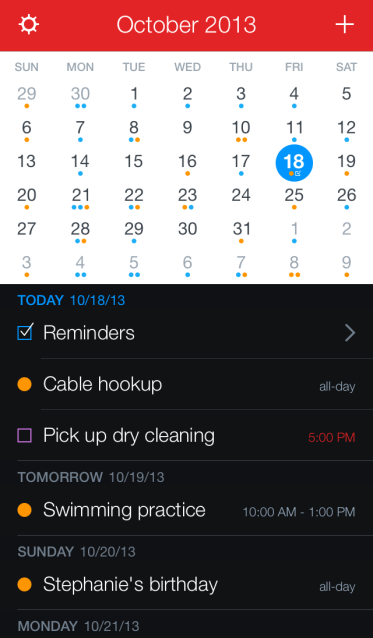 You’ll notice that the composer now has a toggle to force an item you’re creating to be a Reminder, but simply typing a trigger phrase will also create a reminder. ‘To-do, ‘remind’, remind me’ will all work, and hundreds of others.

Of course, all of this is integrated with Apple’s Reminders app. And it all supports geo-fencing to trigger on arrival to or departure from a location.

One example of how well thought out those reminders are: you don’t just get a list of all of you ongoing, undated items in the list. This would clutter up the display and become meaningless over time. Only the items you’ve attached a date or time to show up here. This retains the list’s status as your ‘agenda’, only showing you the stuff you must get done on a timely basis.

The new iOS 7 background notification support means that you can also now set alarms, using keywords like ‘alarm’. Previously, because of Apple’s restrictive backgrounding rules for apps, these would only trigger if they were synced to Calendar and that app sent the alert. Now, you can set alarms right within Fantastical and have them synced to the desktop version and triggered in the background.

One of the most powerful things about the original Fantastical — and which gets retained in the new version — is that it was truly a calendar built from the ground up for how we use our mobile phones. There have been some other notable entries since like Sunrise, but the simple swipe-able interface of the app and powerful timeline view still makes it a standout. 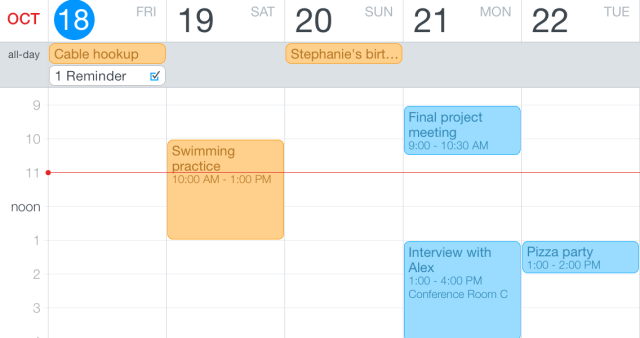 Fantastical 2 is out on the App Store today as a $2.99 paid upgrade, which fits in with another trend we’re seeing. Developers who put in a significant amount of work on an iOS 7 update are charging for the new versions of the apps. Tweetbot did it and had major success on the App Store charts — while receiving a significant amount of blowback from users who saw it as a money grab.

As far as I’m concerned, paying a couple of bucks for a productivity app, especially one as essential, and great, as Fantastical is an easy choice. This is an app that I will open thousands of times over the next few years, and rely on heavily to make sure I’m where I am when I need to be. After an initial sale period, the app will go up to $4.99, which is still a bargain.