The “local space” has long held sway over the imagination of entrepreneurs, who have produced everything from travel apps to city guides, neighborhood news sites and event planners in pursuit of local dollars. But local is a tough nut to crack, with many high-profile companies stumbling along the way, including EveryBlock, Patch and YardSellr to name a few.

Nextdoor is one of a handful of companies that has managed to thrive in the local market, and a growing list of investors are betting that the “Facebook for your neighborhood” could be the next big social network.

With 22,500 neighborhoods (and one-in-seven in the U.S.) now using Nextdoor to create private websites where locals can ask questions, get to know one another and exchange advice and recommendations, Nextdoor is ready to go international. To do so, the startup has secured a whopping $60 million round in Series C financing from veteran investors, including John Doerr and Mary Meeker of Kleiner Perkins Caufield & Byers (KPCB) and Lee Fixel of Tiger Global Management.

The round, which brings the startup’s funding to over $100 million, also includes Comcast Ventures, as well as Nextdoor’s previous investors, Benchmark, Greylock Partners, and Shasta Ventures.

Now two years from lauch, Nextdoor has seen its customer base increase by 400 percent over the last twelve months, CEO and founder Nirav Tolia tells us. With big names like eBay, Facebook, Google and craigslist all playing in the potentially winner-takes-all social networking space, Nextdoor has managed to find an audience by focusing on becoming a support group for your local neighborhood.

“We believe that Nextdoor has the opportunity to be for our local life what Facebook is for our social life and what LinkedIn is for our professional life,” Tolia says. With its 400 percent growth over the last year to 22,500 neighborhoods, the startup is now growing at a similar rate to Facebook, Twitter and LinkedIn when they were at a similar point in their development. While the CEO declined to share particulars, he says that the startup’s new round pegs it a fairly similar valuation to the social networking giants — not quite at $1 billion, but “healthy.”

Since the launch of v2.0 in February, the local social network has been focused on increasing the opportunities for engagement by allowing users to view and post messages with closely bordering neighborhoods, for example. Initially, users could only post messages and share information about their own local hood on Nextdoor, but the startup is hoping that, by taking a few measured steps to expand its scope, it can help neighbors, say, find that missing cat that wandered from one neighborhood into the next. Being able to see those limited updates from nearby locations makes sense, and has added to Nextdoor’s utility.

The network is also providing value by becoming a communication network for local crime and safety monitoring — now one of Nextdoor’s most popular use cases. In February, for example, crime and safety-related posts accounted for 20 percent of the network’s messages, and this remains true today, the CEO says. As Alexia pointed out in her coverage of Nextdoor back in March, today Nextdoor has begun to act like a modern, web and mobile-friendly version of your local “Neighborhood Watch.” 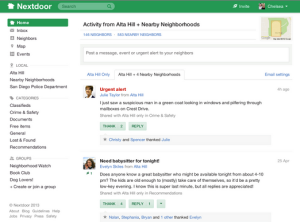 Over time, crime and safety channels have grown in importance within the community to the point that Tolia now considers Nextdoor’s “Neighborhood Watch” functionality to be equivalent in value to what photos have been for Facebook over the years. “Crime and safety monitoring has become the irreplaceable part of the network,” Tolia explains.

Based on the success of its Neighborhood Watch, the startup now has partnerships with over 100 cities and has integrated with local police and fire departments, who are now able to access special accounts to issue dispatches and alerts to residents through the network. With its new round of funding, the CEO says that the company plans to continue developing these kinds of initiatives, along with those that can add value for local governments and civic agencies.

Allowing users to access its neighborhood social platform on mobile devices has also been integral to the startup’s continuing growth over the last 12 months, boosted by the launch of its first native Android app in August. The Android launch followed three months after Nextdoor’s iPhone app, which has been accounting for as much as 20 percent of the content published on its network, Tolia told us at the time.

With a fresh $60 million in its coffers, and backed by investors (and board members) like Bill Gurley, David Sze and John Doerr, who are plenty familiar with the development of online social networks — with early investments in Facebook, LinkedIn and Twitter (and Instagram and Snapchat) between them — Nextdoor is ready to begin expanding in earnest.

This means that the company will be looking to significantly ramp up hiring and add to its engineering over the next twelve months, as it moves to position itself as the “lifeline to your local neighborhoods” throughout the U.S. Of course, not only is it offering this kind of Rockwell-ian place for Americans to borrow a ladder, meet their neighbors, organize a block party, discover a local handyman or find a lost pet; thanks to its new capital, beginning in 2014, Nextdoor wants looking to become that lifeline in Berlin, Moscow and everywhere else, for that matter.

Rather than focusing on monetization in the near-term, the Nextdoor CEO tells us, the company is instead laser-focused on growing its network abroad. Once it has gained a critical mass in both domestic and foreign markets, only then will it turn to worrying about turning on revenue streams, he continued. And, with $100 million raised over the last 18 months, Nextdoor is now (one of the few) lucky enough to be able do just that.