Facebook wants to be your one and only messaging app, so it’s asking for your phone number. Today it starts testing a version of Messenger for Android that lets you message non-friends by phone number. It’ll request your number too to make these connections, though it’s kept private. The test app also has a cleaner design and a buddy list that shows if friends who will get a push alert if pinged.

The test rolls out today to a limited subset of Messenger For Android users, but you can bet if the design and phone number messaging is popular, you’ll see these changes roll out to everyone on Android, and maybe iOS too.

Update: One thing you won’t see, though, is the option to actually send SMS messages from within this test of Facebook Messenger. Facebook added that option a year ago, but saw low traction, and so it’s stripped it out in favor of trying this new method where you send messages to phone numbers, but they’re delivered inside the recipient’s Messenger app, not their phone’s SMS inbox.

The Messaging War Rages On

Messaging is a fiery battleground right now. SMS, the carrier-controlled old text messaging standard is becoming obsolete. Expensive and with few features, it was bound to die eventually. So now, tech giants and young startups alike are competing to be the successor to SMS.

There’s platform-based options like iMessage, which is baked into iOS so iPhone users can message each other for free. There’s cross-platform services like Facebook Messages and the new Google Hangouts, which let people communicate across desktop, mobile, and sometimes even email. There are mobile-first startups like WhatsApp, WeChat, Kik, and KakaoTalk that focus on speed and group messaging. And then there are specialty apps like Snapchat’s self-destructing photos, and Line’s stickers.

The potential messaging user base, which includes practically everyone, is fractured across all these services. You might not know which of these apps your friends are on, but you can bet on one thing: they have a phone number.

That’s why many of these startups rely on your phone book and number. They scrape your phone’s contact list and make it easy to message anyone whose number you have. This way you don’t have to formally connect on these services.

Now Facebook is doing the same to open messaging between non-friends. It knows its social graph isn’t perfect. Sometimes you end up with someone’s phone number, and the friendship comes later if at all. So it asks to verify your phone number and import your address book so you can select recipients by name rather than number. 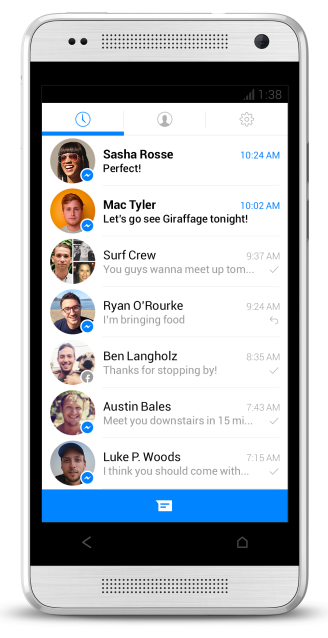 Your number is defaulted to the “Only Me” privacy setting on your profile, but a company spokesperson admits it also uses that number to “to help keep Facebook safe, to help people make friend connections, and to deliver targeted ads.” The idea of your phone number and contact list helping Facebook monetize might irk some privacy buffs, but since Facebook is starting this as a test and will likely roll it out slow if it works, you won’t see concentrated, collective outrage like its old, big changes used to.

In the end, Facebook doesn’t want you to have to bounce out of messenger and SMS someone, so it’s essentially assimilating SMS and letting you do it from within its app. Then you can use its extra features like audio messaging, read receipts, location sharing, and more.

If the strategy works, it could increase engagement and give Facebook more info about who you care about. I’d expect it to immediately start suggesting you friend whoever you message with by number. It’s those friend connections that populate your News Feed with content that excites you. And that engagement happens to keep you coming back and seeing ads.

But really, if Facebook is going to complete its mission to connect the world, it has blossom from the ashes of SMS.