Frontback, the photo app that lets users create composite images using the front and rear cameras on their iPhone handsets, is on a roll. Launched only in August of this year, it’s now picked up some 300,000 downloads on virtually zero marketing budget — but a lot of buzz from the likes of Ashton Kutcher, Jack Dorsey and… wait for it… the Prime Minister of Belgium, posting their Frontbacks on Twitter and elsewhere. And that is giving it some other momentum: Frontback has closed a new round of funding of around $3 million, and we have also learned that before that round was closed, Twitter approached Frontback to buy it.

“Nothing to say about that,” he says. “We are totally committed to building a wonderful product with an A class team.”

That product has had an update in the past few days that points to how Frontback is gearing up to scale. Users can now connect their address books to find more friends, and they can now share Frontback pictures to Tumblr, email and SMS in addition to the existing ability to share to Facebook and Twitter.

The iPhone app is also expanding in terms of features. It includes a personalised feed with the most recent posts from friends (with Staff Picks under that); post captions in the feed; and a very cool feature that gives you the ability to flip top and bottom images, and to select whether the cameras will take forward-facing or self-facing images. (Yes, that’s right, you can now have double selfies if you so choose.) There is also a new offline feature that means users can restore posts they may not have sent.

All of this will mean more users playing with Frontback, more time on the app, and more pictures.

From the back to the front of the pack

Frontback has had nothing short of a remarkable rise, and is a good example of how a startup’s fortunes can quickly change when the founders decide to pursue what originally looks like a tangential or secondary avenue. Checkthis — a light publishing platform that lets users create one-off blog posts with photos to share with others — was originally founded in Belgium, and it made the move to New York with that $910,000 seed round to fuel its growth.

It’s not clear if that growth was just not coming as fast as it wanted — Checkthis is still alive, by the way — or if its founders were just very interested by one particular application of how to use it: the first Frontback came by way of a Checkthis post from della Faille in March 2013, which explained what became the basic concept for the app with a picture of himself in his Williamsburg living/co-working space. 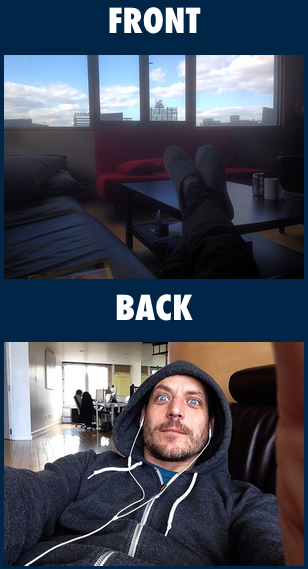 “The idea of a #frontback post is a super simple and fun way to share an instant. You stop everything, take one picture with the front, one with the back, and you hit share — jokes are authorized.

“If you’re crazy enough, you can even write a description like: “This is me right now, interacting with you from my sofa in our apartment in Williamsburg. Behind me you can see (or trying to see) Etienne from Poutsch working at his desk.”

Fast forward four months to the launch of a standalone Frontback app, it turns out that it came when the company had just weeks to live on its funding. But the app came through, with 200,000 downloads in its first weeks; that quickly led to a relocation to San Francisco (and new live/work digs just this week) and some starting to ask “Is Frontback the next Instagram?”

From what I and others saw, things really changed for Frontback at Disrupt in San Francisco — the same place where della Faille revealed the 200,000 downloads figure and the startup’s near-death experience. There, behind the stage, della Faille was holed up in a room — Mike Arrington’s green room, I think — where VCs, one after another, filed in to meet with him. “It was quite obvious. He was holding court,” one person told me.

It’s interesting that Twitter approached Frontback in this process. It speaks to how the company, leading up to its IPO and keen on growing more engagement on its platform, has been developing and acquiring services that fit well with the kind of rapid-fire engagement that Twitter is known for — Vine being a key example of that strategy. It also points to reports we’ve seen that Twitter is looking to revisit its messaging portfolio. At its heart, Frontback is both a medium for sharing pictures but also offers a way to send direct to specific users, via SMS, and of course further direct messaging channels could be added in the future.

It’s also interesting that della Faille and Co. didn’t incubate and try to grow Frontback in their native Belgium. Despite all the progress we have seen around the theme of tech becoming increasingly decentralised outside of Silicon Valley (and this week’s Disrupt in Berlin is a testament to that), della Faille believes that it’s inherently more challenging to take chances in the Old World.

“In Europe you can’t be too ambitious,” he says, “because people don’t take you seriously.” He also believes that the ethos generally is not to focus too much on the little details in Europe. “The time we spent working on the camera on Frontback, I’m pretty sure in Europe investors wouldn’t have accepted that level of detail. They’d say, ‘It’s working. Take the photo app and go ahead and launch it.'”

And there will eventually be apps for iPad and Android to help the service scale… but not quite yet. Conscious that there will of course be more and more camera apps today and tomorrow, the goal for Frontback is to make itself the one that more people use because it is the best. “Right now the focus is on the design. We take that seriously,” he says.