Twitter has been rejiggering its thinking about direct messaging recently, largely in the face of enormous messaging platforms like WhatsApp, Line, Snapchat and others. Today, the signs of Twitter’s thawing feelings about messaging have manifested as a new link in Twitter.com’s top bar which takes you right to your inbox.

Recent reports from All Things D have claimed that Twitter is working on its messaging product. The work could manifest in a revamp of the way that it operates in the main product or result in a separate messaging system. The report says that DMs were close to being on the chopping block, but recent attitudes have changed.

As someone who uses Twitter DM as probably my second-most utilized private messaging avenue, I’m fairly interested in where they’ll go here. Some folks, like our own Jordan Crook, feel that a standalone messenger app would not be the way to go. I happen to agree, and feel that Twitter is more likely to enhance the core product with improvements, but we’ll see.

Twitter previously buried the DM section under either your profile view or the settings icon at the top of the page. 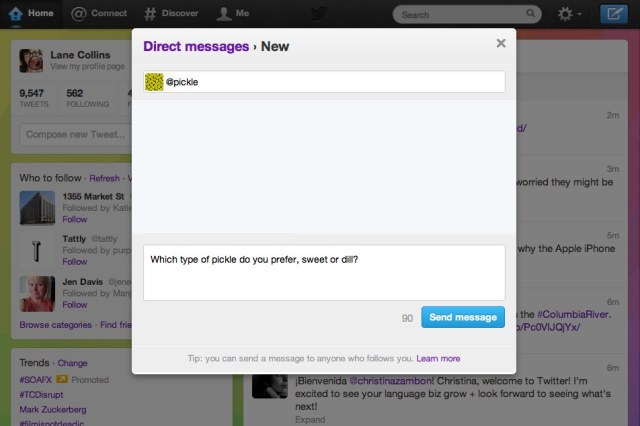 From what we understand, Twitter’s next version has been in the works for months, plagued by decision-making delays. Whatever it’s doing about DMs, it seems to be showing some outward signs of attention to a feature it has neglected for years. This version is said to have a swipeable interface and other enhancements, but it’s unclear whether it will be the one that brings DM improvements.