Here at the TechCrunch Disrupt Europe Hackathon, Sam Gichuru (left) and Billy Odero spent the night working on a neat hack to help small businesses promote themselves by tapping into social network influencers. The hack, called Twpple, is designed to give smaller outlets, such as kebab shops, market stalls, hair salons and so on — basically any small businesses that hasn’t built up its own digital following — a stronger voice than they would otherwise have in the digital sphere to promote whatever it is they sell.

The hack uses Klout scores as a shortcut to identify individuals with the most social cachet that the SMEs can then tap into. The social influencers get paid for tweeting a series of messages (which they would word themselves) about the business or promotions they are running — with small payments giving them an incentive to help businesses spread the word.

“If your Klout score is 25 you can get $2.50 for sending three tweets,” said Gichuru, during his on stage pitch. “We have called this ‘pay per influence.'”

The bigger story here is not so much the hack but the fact that Gichuru and Odero came all the way from Nairobi, Kenya, to join the hackathon. The pair work for an accelerator in Nairobi called nailab — where Gichuru is CEO and co-founder, and can normally be found helping startups hone their pitches for the hackathons the incubator runs.

They told TechCrunch they made the trip to Europe to attend another tech conference in Amsterdam and meet with some investors and decided to add a two-day hack in Berlin into the mix while they were here. Their eight-hour flight from Nairobi was followed by an epic 13-hour train ride from Amsterdam to Berlin, which involved a lengthy detour after a 500-pound unexploded WWII bomb was found under a bridge(!). Add to that, Odero’s laptop broke and the pair’s Kenyan bank cards were rejected so they couldn’t buy a replacement machine — meaning they had to share one MacBook to build Twpple. Yet still they hacked. 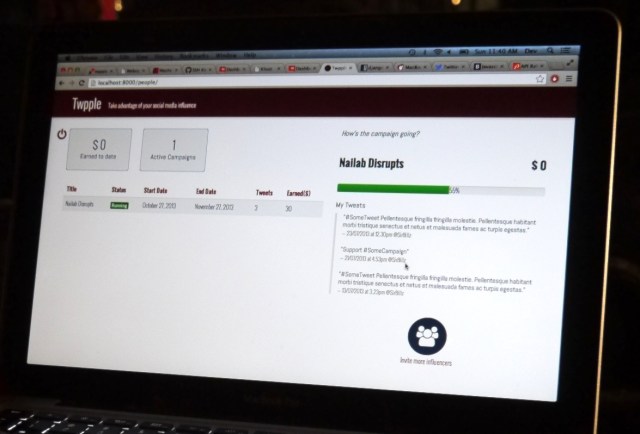 Gichuru said Twitter is especially popular in Kenya — hence their focus on that social platform for Twpple. But while social media is a “big game” in Kenya for individuals, many small businesses still remain on the outside.

“They are always asking us, ‘hey how do you get on social media? How do we get social media influencers to tweet about us? And talk about us and write and talk about our Happy Hour?’ So we decided to build a platform where they can just log in, even from their mobile phones, create a small campaign — just based on the preferences they put up — for example their location, demographic, target market they want to reach.

“Then they’re able to get a list of the social media influencers who have signed up on our platform. And based on these guys’ Klout data they are able to say how much to pay for a certain amount of tweets.”

Payments would require influencers to send a series of tweets — in order for the small business to get enough “traction” from the micro campaign, said Gichuru, discussing the hack backstage. “You need at least three tweets [per influencer] to get enough traction [for the business that’s paying for the campaign]. But it has to be a conversation. We have to find a balance between having a real conversation and having marketing tweets from these people,” he said.

“It’s very easy for people who have a lot of Klout to start a trending topic [in Kenya],” added Odero. “We have some of the craziest hashtags. And normally it’s just one guy.”

“Social media big wigs — we call them ‘big wigs’ — become celebrities in my country,” added Gichuru. “They are known, they are followed, they actually — when the government does something, they do have a voice to question it or put government to task to explain it. And you will notice that even during the recent terrorist attack in Nairobi, social media influencers were the ones who were providing more information than the government, than the mainstream.”

Gichuru also pointed out that leaning on social big wigs — who are after all going to be broadcasting marketing messages to their own followers — adds an element of “self-regulation” to the advertising process. “If it’s bad people are going to come back at you,” he said. “And you don’t want to be the point that the community attacks.”

How did the TC Disrupt hackathon compare to hacks nailab runs? “It’s been a really global experience. We’re always developing local solutions. Being here gives us a chance to see how to develop for a bigger audience and a bigger market,” said Gichuru. “It gives you a sense of how to monetise it as you’re hacking.”

“Most people [at nailab hackathons] try to focus on social enterprise,” added Odero. “It’s easier to get donor funding, it’s easier to get sponsors if you’re actually building something that solves an existing problem where we are.”