Created by the founders of Russia’s biggest social networking platform, Telegram is a new messaging app that offers speed, security and features such as secret chats with end-to-end encryption and self-destructing messages.

Brothers Nikolai and Pavel Durov, who launched VK (originally called VKontakte) in 2006, began working on Telegram 18 months ago as a research project because they wanted to create something that was “really secure and fun at the same time.” The importance of Telegram was underscored when Edward Snowden’s revelations about NSA and PRISM were first made public in June.

“It made a lot of people really scared and concerned about the current situation. We are certainly among many, many people who started to think about ways to fix the problem,” Pavel told me in a phone interview.

Durov has had his own run-ins with Russian legal authorities. An investigation into a traffic incident Durov denied involvement in was halted for the second time earlier this month, but not before the offices of VK and Durov’s home were both searched. VK was also put on a blacklist earlier this year by Russia’s State Telecom Regulator. Though the organization later claimed the blacklisting was an accident, some analysts said it was a government attempt to intimidate online activists. (During our phone interview, Durov noted that he was using a Russian SIM card and that there was a good chance our conversation was being recorded by the Russian legal authorities.)

Gaining Trust By Being Non-Profit And Open

Telegram is based on a custom data protocol called MTProto built Nikolai Durov, a mathematician. The app’s secret chats, a separate feature from its ordinary chats, use end-to-end encryption. They cannot be forwarded and can be set to self-destruct after a certain amount of time. One key difference between Telegram’s secret and ordinary chats is that secret chats are not stored in the app’s cloud, which means you can only access messages from their device of origin.

“The first thing that we wanted to make clear is that nobody has to trust anybody. We don’t take people’s trust for Telegram for granted,” says Pavel Durov.

Durov says there are currently about 100,000 daily active users and he hopes users and developers will take advantage of Telegram’s open API and protocol.

That way, Durov explains, “we will be able to invite everyone to review the messaging algorithm that we use on Telegram and inspect the source code of the app. We can earn trust from them, that end-to-end encryption is something that can be done on the client side. This way, any interested person can check that the app does exactly what it claims to and doesn’t send information to other sources or does anything else that is insecure.” 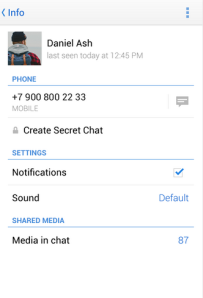 Telegram’s founders say the app will remain non-profit because that enables them to avoid commercial and legal pressure. If they eventually need funds to scale up, Telegram will ask for donations from users or make additional services available as in-app purchases. These could include a virtual number that can be used instead of a real mobile number, ensuring more confidentiality.

Nikolai Durov oversaw the scaling up of VK’s platform as it grew to 50 million daily unique users over seven years. Pavel says the lessons the brothers learned during VK’s development means they will be able to make sure Telegram remains secure even if its user base rapidly expands.

In December Telegram was downloaded over 100,000 times in one day by users in the Middle East, compared to its usual average of 2,000 downloads per day. Based on Twitter chatter, the Telegram team figured out that English-speaking users in the region were downloading the app because they were interested in its group and media sharing capabilities. Unlike WhatsApp, which limits group chats to 50 members, Telegram currently allows up to 100 members.

Telegram’s team wants the messaging app to stand out by offering speed and security, as well as reliance on crowd-sourcing and community-driven efforts.

“VK is famous for its competitions among third-party developers who build alternative versions of VK on its open API,” says Durov. “I hope Telegram will be able to rely on the community even more than VK since it’s a non-profit project that hopefully will be able to attract people who share the idea behind it.”

Another lesson Telegram’s team learned from its experience with VK is to stay clear of Russia’s government. The app rents data centers and servers around the world, including in London, San Francisco, Singapore and Helsinki.

“As a foreign company and offshore entity we will not be obliged to comply with the rules of Russia, China, Saudi Arabia and countries like that,” says Durov.

If Telegram received requests from government or legal organizations, it would not be able to provide data for end-to-end encrypted chats anyway because the encryption keys are generated on each user’s device and not the server.

“Anyone could look into our documentation and the source code of the app and make sure that we are not trying to fool anyone. The NSA, for that matter, could do the same thing and see that we cannot provide them with any data for purely algorithmic, mathematical reasons,” he adds. “I think that is a way to refuse data requests without openly breaking local rules in America or any other country.”

Telegram is the first project by Digital Fortress, a new company founded by the Durov brothers. The next project will involve voice communication, though Durov is still not sure if it will be developed as a separate project or as a new feature for Telegram. Current priorities for Telegram’s small engineering team include enabling users to permanently delete accounts.

“We will come up with solutions to really ensure people that of the complete deletion of their data,” says Durov. “We have to consider several options and chose the best one to do that in a transparent way.”