Des Moines-based Dwolla, a company building web-connected infrastructure for managing digital payments, is today taking its first step to move beyond support for cash with the debut of “Dwolla Credit.” This new consumer- and merchant-facing service is being launched in partnership with Alliance Data Systems Corp (ADS), a provider of branded credit card programs, but Dwolla expects there to be other partners of a similar nature in the future.

ADS’s Retail Services business will provide a cardless, private label credit product through Dwolla’s network as a part of the new, multi-year agreement between the two companies.

As the name implies, the service is about extending credit to consumers that they can then tap into when shopping online by selecting a new Dwolla funding source at the time of checkout. At launch, 40 merchants who already accept Dwolla on their sites have announced support for Dwolla Credit, and more will be added in time as the service moves from beta to its public release.

These include a number of companies whose names will be familiar to TechCrunch readers and other online shoppers, including Ribbon, Grand St., Fiverr, Twice, Humble Bundle, Karma, ManPacks, Lolly Wolly Doodle, Namecheap, littleBits, Shoptiques, WunWun, Tikly, Jane.com, Zady, and many others. (A full directory of participating merchants is available here: dwolla.com/storefront.)

ADS will handle actually approving and providing consumers with the credit, and that part of the process is not changing much from how it works today. Consumers will still be evaluated for their credit risk as before, and ADS will also manage the other tasks associated with providing credit, including disputes, customer support, setting the APR, credit limits, and more. But now this credit, which has previously been available through traditional bank cards and the like, is now available through Dwolla’s online service itself.

Dwolla Credit merchants can choose to integrate the option into their e-commerce sites using shopping cart plug-ins that offer Dwolla as a checkout option like Spree, Shopify, Magento, or 3D Cart, for example, or they can opt for a custom integration using the APIs the company provides, as before with the cash-based Dwolla checkout option.

Also, like Dwolla’s cash-based checkout option, Dwolla Credit sports the same terms: Transactions under $10 are free, and for those over, it’s just a flat 25 cents to move the funds from consumer to merchant. In addition, the funds are transferred in real-time – something that’s always been part of the company’s value proposition, as it attempts to build a payments infrastructure the way one would be built today, with the more modern technologies we now have on hand. That means that funds are immediately available to the merchants after payment – at least within Dwolla’s network, though moving them bank into another bank account could still take the standard amount of time. 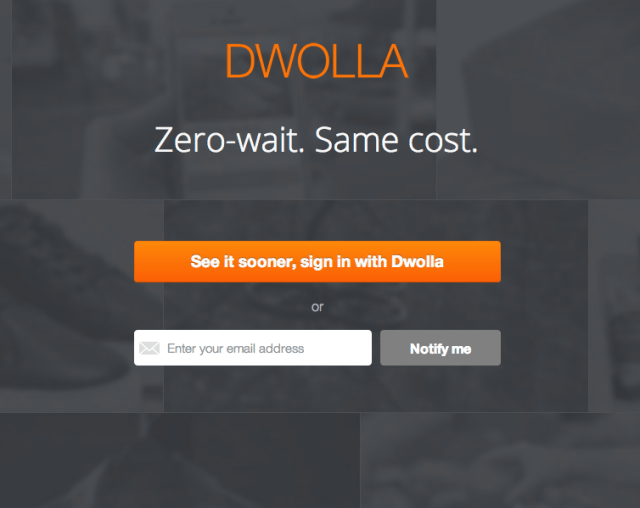 Real-time fund transfers have always been a key selling point for Dwolla. Its product suite today includes tools that enable online checkout, peer-to-peer payments and B2B payments – like MassPay, an alternative to check writing and wire transfers for businesses — as well as things like FiSync, a money transfer system for banks and other financial service providers. In some cases, Dwolla competes with other digital payment technologies like PayPal, but in others it’s taking on outdated banking technologies like ACH (Automated Clearing House), a 40-year old legacy infrastructure that moves money between banks over two to five days, depending on the institutions involved. With Dwolla Credit, it’s taking on PayPal’s Bill Me Later product, it seems.

Dwolla Credit isn’t the first effort the company has made to woo merchants. It previously launched online checkout options like its pay with Dwolla buttons and POS integrations. Today, the company says it has over 25,000 merchants, non-profits and governments using the service. However, being a newer brand in the financial services space, some merchants may have been hesitant to use Dwolla in the past, despite its lower fees. (Or to put it anecdotally, as some small business owners have put it to me: “What the heck is Dwolla, and why should I use it? Is it the new PayPal?”)

Dwolla’s partnership with ADS could change merchants’ perceptions by giving the startup a sense of legitimacy that the Dwolla brand alone could not yet convey.

“Having somebody like this company come forward and introduce us to this aspect of the industry with credit – whereas we’ve always been cash-inspired – it’s been a really fortunate thing,” admits Jordan Lampe, who heads Dwolla’s communications. But he adds that the forward-thinking financial-services companies and organizations understand that consumers’ expectations and behaviors are changing, and cites other startups in the space like Square and Simple for helping to make the space interesting to these established players.

“A lot of these organizations — not just this one, but others we’re talking to on the backend — are now stumbling across new ways to plug their financial services and offerings into Dwolla to see what happens. This is one of many you’ll see in the future, in 2014.”

The service, now in beta, will initially allow a small number of beta testers in to provide early feedback while the various kinks are being worked out. The company is rolling the invites as the week goes on, so it could be 500 users or it could be 5,000 who are allowed in, we’re told. Dwolla Credit will launch to the public in Q1 2014.