As Nielsen continues to work closely with Twitter to track tweets about TV shows; Twitter continues to explore ways of using its platform to market TV content; and Internet portals contest who is the biggest video ad player of all, some figures out today point to how converging ads across those two mediums could be a smart move. Today, Nielsen released its latest quarter ad figures that show that while TV remains the very biggest of all mediums for ads, Internet ad spend continues to grow the fastest of any category.

The research group’s quarterly Global AdView Pulse report shows that for all the evolution that we’ve seen in terms of consumer habits — spending more time looking at computer, tablet and mobile screens than ever before — when it comes to ads, the world remains analogue. In Q2, television — not streamed online, but the stuff you get on the box, live, in your living room — accounted for 57.6% of all ad spend globally. The next-closest category? Newspapers — yes, the crinkly, sometimes unwieldy paper masses that many of us are no longer buying and reading; those things that are daily moving to all-digital platforms to offset the rising costs and diminishing returns of printing. Newspapers came in at nearly 19%, followed closely by magazines at 10%. 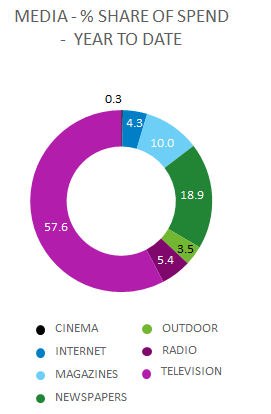 As you can see in the chart above, Nielsen’s figures — which are global — show that despite the surge of users on services like Facebook and Twitter, and the number of people who get all of their content (whether it be news, video or social) online, Internet display ads are still not getting much of a look in. In the first half of this year, Internet display ads only took 4.3% of all spend. In other words, for ever dollar spent on advertising by a brand, only 4.3 cents were online. As in years past, Internet continues to be the fastest-growing of all mediums, growing by nearly 27%, nearly six times as much as TV spend (which, yes, is also still growing, compared to declines in other traditional mediums like newspapers, magazines and cinema). 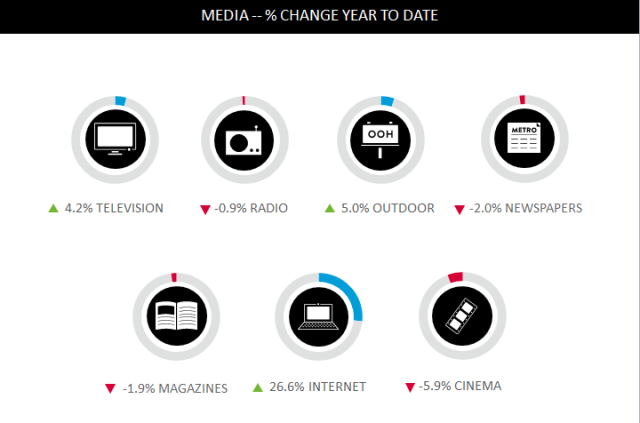 What’s instructive is to compare these figures to those of another research group that tracks advertising spend. ZenithOptimedia in September put out its outlook for how this would play out in the year ahead. It also determined that TV was the biggest medium for ads globally, but by a significantly smaller percentage. It says that in 2012, TV accounted for 40% of ad spend, and that it would only decline by 0.5 percentage points by 2015, to 39.5%. (It may not be surprising to you that the company that is putting out stronger TV figures also happens to have a large business tracking and measuring TV consumption.)

Similarly, ZenithOptimedia has put a much stronger emphasis on Internet spend, which it says was just over 18% of ad spend in 2012 and will rise to almost 25% by 2015. Of note, Nielsen is measuring only display ads, whereas ZenithOptimedia is looking across other categories as well, specifically search and classified.

While Nielsen only deals in proportions and not actual figures in its report, ZenithOptimedia spells out how its ad spend projections translate into dollars. It notes that for 2013, display ads globally will be worth $40.2 billion in sales, with total Internet ad spend at just under $100 million for all of 2013.