In the field of fitness trackers and apps, evidence of their efficacy is often anecdotal. The New York-based health startup Noom is looking to back their technology up with harder evidence, though, and the team has received a small business grant from the National Institutes of Health to do just that.

The NIH grant is funding a study on the impacts of smartphone technology in eating disorder treatment. The two-year pilot study, which looks specifically at individuals with binge eating problems, will be led by eating disorder researcher Tom Hildebrandt at Mount Sinai Hospital in Manhattan.

The Noom app used in the study, called Noom Monitor, is not actually the one currently on the market, but rather a version modified specifically for the purpose of tracking binge eating, co-founder Artem Petakov said. Although many people do use Noom’s consumer app for weight loss, the startup doesn’t like to bill it as such: according Petakov, it’s much more about promoting health overall.

Orienting a study around one particular kind of unhealthy behavior, binge eating, is one lens through which to look at the efficacy of smartphones in health.

Technology has been slow to enter the mental health field, Hildebrandt said. Other eating disorder intervention models have made use of websites and chat rooms, while a well-known study conducted at the University Hospital Heidelberg looked at the use of text messaging.

The team is now recruiting participants, with the intention of enrolling 80 patients over the next year and a half. The study comprises a treatment phase of three months, during which the participants track their diet and attend a weekly therapy session, and a six month follow-up period after that.

Participants in the study will use either pencil and paper to track their diet and feelings, as is traditionally used in this kind of therapy, or the Noom Monitor. And they’re not only logging the foods that they eat, but also the timing of their meals, feelings of being out of control, compensatory behaviors like purging or over-exercising, the urge to compensate, and body checking behavior.

“[Pen and paper] is pretty effective. You get about 60% remission rates with people with binge eating disorders,” Hildebrandt said. “That’s pretty potent.” 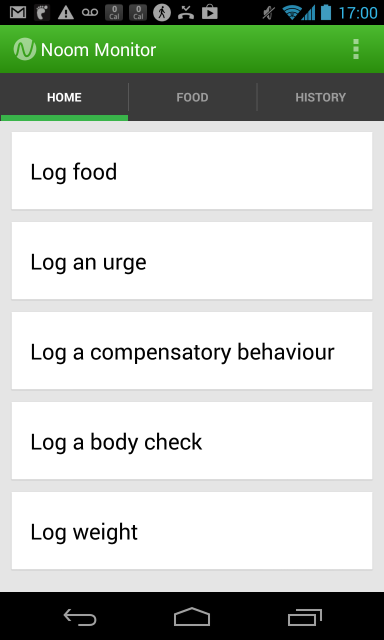 The question is whether or not the Noom app will be even more so. There are two main outcomes, Hildebrandt said. The first is that the app could improve engagement and adherence to self-help. The second would be increased efficacy: that the Noom app delivers a more potent effect over the long term and that those effects are better sustained over the follow-up period.

“The primary and most stringent criteria for success is the absence of binge eating or purging behavior,” Hildebrandt said.

Efficacy is measured through standardized interviews conducted by blind reviewers. If the study passes those metrics, the team will begin a formal study on the order of 300 to 500 participants.

The app also provides therapists a dashboard to see how well their patients are doing in real time.

“There’s a formula developed that shows how effective it is. If the patient is struggling, they can focus more on that patient… You want someone saying they’re objectively out-performing or under-performing,” Petakov said.

The benefits for Noom of conducting a study like this are pretty clear: not only does it help people, but it could give their technology much more solid scientific footing.

It’s also likely that more academics will begin working with small businesses on research in the coming years, Hildebrandt said. Because of tight budgets, it has become harder to work within traditional grant mechanisms, meaning that more academics are starting to look outside of their comfort zones and partner with businesses. Learning to reconcile the slower pace of academic research with the rapidity of movement in a for-profit business has scared away academics in the past, he added.

The success of mental health apps is a question of how hard a smartphone can work for a patient without them engaging with it, Hildebrandt said. People won’t have a high tolerance for doing the heavy lifting on an app, so being able to predict behavior will be key.