There’s no shortage of apps which are trying to build a better interface for managing email. The latest to join the melee is Cannonball, an iPad application which reorganizes the inbox by separating your communications – personal emails from subscriptions, daily deals from newsletters, and so on – into a highly visual interface you interact with via drag-and-drop.

The idea that not all email should be treated equally, with the same level of importance and visibility is at the core of nearly every email messaging client claiming to fight “inbox overload” today. Some, like Mailbox, have focused primarily on triage, while others like newly launched Skimbox, want to re-prioritize your communications automatically, the way Gmail’s “Priority Inbox” does for users on its platform. But the truth is, heavy email users have been managing their email flow for some time, whether with Outlook rules or Gmail filters or now Gmail’s “tabs” interface, or sometimes, even with the help of real-life assistants who have been invited into execs’ inboxes to help manage communications on their behalf.

But Cannonball, unlike many of the new email clients in this space, is not targeting business or productivity users, however. It’s going after the everyday consumer who’s less interested in “inbox zero,” but instead feels overwhelmed by the clutter of their inbox. 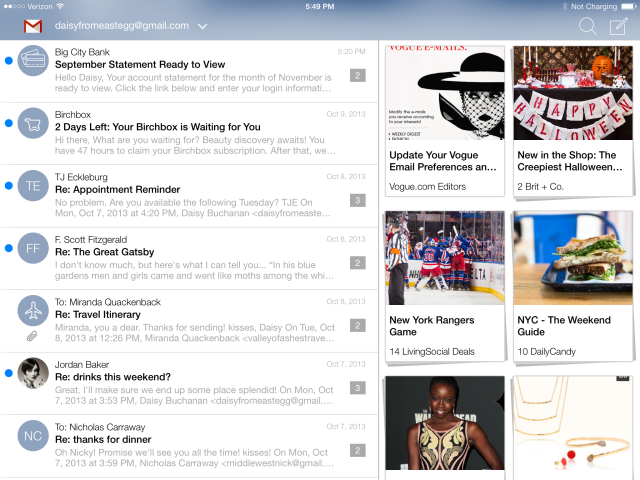 The way the app works, is that it presents a visual layout of your email messages, with important communications (emails from friends or family, purchases) separated from so-called “leisure emails,” (daily deals, newsletters, etc.). The leisure emails are automatically marked as read and are grouped by sender for later viewing. As you work with your emails in the app, you can drag and drop messages from one section to another in order to train it.

Meanwhile, you only receive new message notifications for those emails that appear on the “important” side of the inbox.

There are also ways to dig into popular contacts, emails with attachments, purchases, travel messages, finance emails and more, plus a search feature for locating messages. 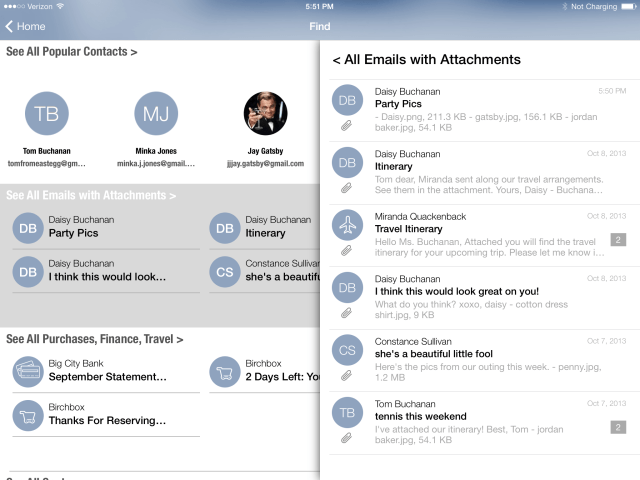 Cannonball has an attractive layout, is well-designed, and is easy to use, but the focus on triaging consumer inboxes may be a bit off the mark. Consumers overrun with “promotional” email spam, newsletters, or social updates from Facebook, Twitter, LinkedIn and elsewhere have already had their needs addressed by the introduction of Gmail’s tabs, in many cases. And the Cannonball app, at launch, is only compatible with Gmail, though the company says that support for Yahoo, iCloud, AOL, and Outlook.com is on the way.

The app is lacking more advanced features for power users, like snoozing and scheduling, replying with templates, adding messages to various folders or tags (or multiple tags in Gmail) and more. And this is by design. For those whose inboxes combine work and personal messages, it may not be the best fit. But I’d argue that it’s the productivity users who are more interested in email management apps – consumers who only get a handful of emails per day (or week!) are probably not dying for a solution.

If anything, Cannonball for iPad is more of a competitor with PeeqPeeq, another tablet app that focuses on your promotional emails, turning them into a personalized, shoppable catalog of sorts. Since Cannonball’s eventual business model involves the marketing emails it sorts for you (details to come), it will really depend on whether consumers gravitate to using this full-on email client to replace their current client of choice, or if they find themselves turning to apps that leverage inbox data, like PeeqPeeq or Slice or Google Now, for instance. (Or possibly, just ignoring the whole space). 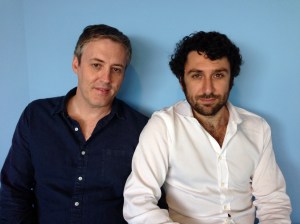 The company was founded in September 2012 by Mobee founder Thibault Le Conte; Raffaele Colella, an MIT Sloan School grad previously at Fiat Group in corporate strategy and Deloitte, and Geocade founder Jim Caralis, previously at Mocospace (where he met Colella), and former director of consumer produce at WHERE (acquired by PayPal). The founders now work together out of Dogpatch Labs in Cambridge Innovation Center in Kendall Square near MIT.

Cannonball has $600,000 in seed funding from Prof. Ed Roberts, founder of the MIT Entrepreneurship Center; Alessandro Piol, an investor at Alpha Prime and author of “Tech and the City”; and Amedeo Giurazza, an investor at Vertis and Nobel Laureate Robert C Merton.

You can try the app for yourself here on iTunes, where it’s a free download.