LovelyHeroku is a new breed of app that enables IT staff and developers to use their smartphones to manage their work on the Heroku platform-as-a-service (PaaS). It’s the kind of service that reflects how different work is these days now that we can carry it wherever we go.

The service is the creation of Matija Bogdanovic, a computer science professor in Croatia, and Mario Danic, a well-known open-source contributor who independently kickstarted one of the first online communities for Slicehost, the company that eventually sold to Rackspace. LovelyHeroku allows developers to manage tasks for apps on multiple accounts, change passwords, scale the apps and a host of other services such as mapping a new domain to the app, orchestrate SSH keys and add new collaborators.

Danic, who also built and continues to run a hosting company called 6sync, said today in a Skype interview that the inspiration for LovelyHeroku came from his own frustrations, as well as watching how people struggle to reach their system administrators when they are remote. He also talked to former customers and fellow Heroku users who said they experienced the same problem. His colleagues also said they wanted to access Heroku without opening the lid on the laptop.

There is a particular emphasis on the user interface, which Danic said is much different than it has been in the past. He said these days everything comes from the user experience. Something can be great in terms of technicalities, but if it doesn’t provide the users the right benefits in the minimum amount of time, then it’s not going to be something people use. 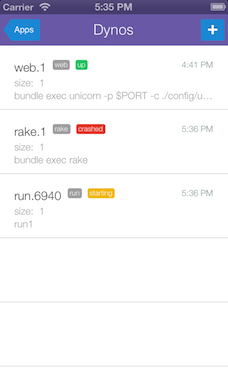 “I know, if you asked me this like seven years ago when I was just starting my first bigger FOSS (Free Open Source Software) projects and that Google thing, I’d [tell] you technical superiority is the most important factor,” Danic said. “Today, I think it’s the customer experience and the customer itself.”

There are more ways to access the cloud services that developers and IT managers use for their apps. Rackspace and Amazon Web Services have mobile apps for monitoring their respective services. VictorOps offers a real-time stream from a company’s enterprise monitoring system through iOS and Android mobile apps, as well as over the web. The apps are designed to keep people updated about enterprise operations with alerts, be they notifications within the app, SMS or email.

But LovelyHeroku is unique in its focus on Heroku, the most popular PaaS on the market. With that focus, the service can leverage the user experience it offers to help developers monitor their apps without the need to use other mobile services that are more broadly focused.