Google has become the latest tech company to introduce a centralized resource containing tools aimed at courting journalists, with the launch of a new hub called Google Media Tools. The idea is to offer a one-stop shop where reporters can access and learn to use a number of Google services, from Google Search trends to Google Maps, as well as get details on how to use Google to enhance their reporting on topics ranging from political elections to humanitarian disasters and more.

The suite of tools debuted at the Online News Association ‘13 (ONA) digital journalism conference last week, and was introduced to the broader public today through a post on Google’s official blog.

The Google Media Tools site is more than just a collection of links pointing to other properties under the Google umbrella. Instead, it has subdivided sections where reporters can dive into various topics they’re interested in to better learn the details of how things like Google’s Transparency Report work, or to learn how to get started using the Google Maps API to build customized maps and better visualize data.

Other information on the new site includes how-to’s for reporters and news organizations aimed at helping them properly promote themselves on Google’s platform – there are instructions on how to get included in the Google News aggregator, for instance, and how to use Google+ Hangouts to reach your audience, though it misses a great opportunity to promote the resource as a way to do interviews (from personal experience, a growing request in terms of doing remote reporting via web chats). 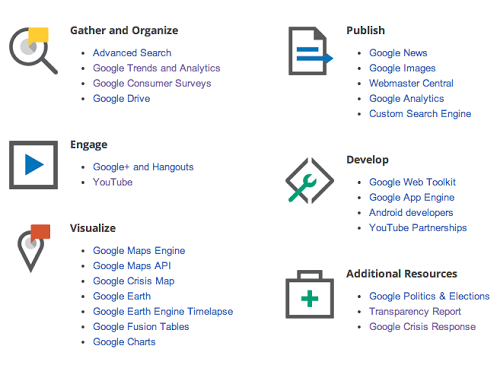 Google’s launch of Media Tools comes at a time when competitors on search, news and social fronts, namely Facebook and Twitter, have already made big pushes of their own to get data from their services into reporters’ hands to aid with their reporting. Facebook this summer opened up the ability for anyone to embed public posts on external websites this summer, after it had already moved into other areas Twitter has been known for like trending topics, hashtags and verified profiles. The social network also recently announced the launch of the Public Feed API and Keyword Insights API, allowing select news organizations like CNN, Today Show, BSkyB and others access to programmatically search through Facebook’s public data for keywords and other trends.

Meanwhile, Twitter has for some time catered to the needs of media, with a dedicated site rich with materials for reporters in newsrooms with how-to guides and best practices and links to Twitter’s various resources for engaging an audience, getting support, understanding Twitter terminology and more.

For these companies, getting their tools and resources into the hands of the press, is not only good PR in a way, but it can help them to boost their bottom lines. Data is their product.

In the case of Twitter, it has also been an effort at getting the service into the hands of those who speak to a mainstream user base, which helped to increase awareness around what Twitter even is and how it’s used. Though Google is much better known, it, too, is still interested in growing its audience, especially as more emerging markets come online thanks to the growing adoption of smartphones and tablet computing.

Explains Daniel Sieberg, Head of Media Outreach at Google, the new site “showcases the power of the Internet overall in reaching new audiences and giving journalists more ways to make an impact.” Sieberg also notes that the site will be filled out better over time with more resources, including case studies, tutorials and expanded content, as well as support for more languages.