Are you spending too much time looking at what your friends are posting on Instagram and Facebook and not enough time hanging out with each other IRL? The founders of Ketchuppp think so. And their answer to this problem is, of course, another app that’s designed to help you meet your buddies when you happen to be near enough to do so. In other words: a proximity-based social networking app. Or a social-mobile-local app if you prefer.

It’s not an app that’s about broadcasting your location to all and sundry. Or meeting up with random strangers who share your passion for Vampire Weekend gigs and happen to be nearby (a la Circle). Or for meeting friends of friends with mutual interests — giving it a narrower focus than U.S. rival Highlight. Or an app for meeting potential business leads over a networking lunch (like Let’s Lunch).

Ketchuppp wants to help you meet up with the people you actually like spending time with on a regular basis (or did before social media ate your social life) — and do so in person, not digitally (so it’s not Path either). It sets that bar at people you have in your phone’s contacts book.

This European Highlight rival has been in the works since January – although its Dutch founders say they came up with the idea in June last year. The iOS and Android apps were launched in August 2013, backed by €300,000 in self-funding. The funding is coming in part from a social media consulting and concept development company the founders also own, called So-Me Consulting, and from another company, DayLike, involved in the project – as the developer.

How does Ketchuppp help you engineer quality ‘hanging with yo homies’ time? It does that by running GPS tracking in the background, and pinging you when a friend is nearby — so you can suggest meeting for a quickie catch-up (or “ketch up” — that won’t get old real quick at all).

“The idea of Ketchuppp is to be a ‘re-active’ app. You don’t have to look for unexpected encounters yourself. Ketchuppp runs in the background and will send you a notification when a friend is nearby. This is programmed in such a way that there is very minimal battery drain. This was always one of the weak spots of these kind of applications,” it says.

“What makes Ketchuppp different from all other social platforms is that we don’t make a connection to any social media platforms at all. Ketchuppp only facilitates encounters with the people from the contact list of your mobile device,” it adds.

That means you can sign up with your email if you like, rather than being forced to drag all your Facebook/social media ‘friendship’ baggage with you. The ubiquitous smartphone’s address book has become a neat shortcut for app makers – providing an alternative, ready-made per user contacts network that does not rely on tapping into the social media establishment.

Privacy is another focus. The app crucially does not disclose its users’ actual location to anyone — friends or frienemies. ”It only informs you when someone is around. So it is not possible to be surprised by someone who found your exact location on a map. (Like find my friends from Apple.) We respect the privacy of the individual user, both people have to agree on a meeting,” it notes.

How nearby a friend needs to be to trigger a notification can be determined by a distance setting within the app. The app also includes three levels of usage so you can broadcast to your buddies or lurk and cherry-pick the friends you want to see.

The three visibility settings are: online, meaning you are visibly using the app and your location will be sent out if a friend passes nearby; hidden, which means you don’t appear as online and your location won’t ping out but you can still see friends’ locations if they pass nearby; and offline, which means not visible, with no pings being sent or received. That’s basically the same as quitting the app except the in-app offline mode is time-limited, so you’ll pop back online again once offline mode expires.

Online is the default mode, and if you opt to go hidden or offline the time limit on your privacy can be set to between two and 72 hours (specifically you get: 2, 4, 8, 24 or 72 hour options).

If you want more control than that, Ketchuppp lets you block certain people who you never want to have spontaneous catch ups with. If that’s the case you should probably just delete them from your phonebook. (Albeit it does suggest this setting is intended to manage your interactions with family members. You can, after all, choose your friends.)

Aside from notifying you when someone you know and want to hang out with is nearby, the app lets you set a status message that’s visible to your friends — to provide a little context around your current mood, say.

This is similar to some of the features offered by certain mobile messaging apps. However Ketchuppp is very feature-light in comparison – intentionally so, since it’s clearly keen to minimise time spent in-app. Its focus is on externalising social networking and then monetising the actual socialising that results.

“We know the benefits of social media, but we also see the weak spots of it. People are getting addicted and stressed, and don’t know how to handle it. That’s why we created our app. So that people are not only posting on social media about a great day at home, but more importantly, sharing it with their real friends in real life,” it says.

On the monetising front, the app pulls local businesses into the mix – suggesting a list of nearby cafes and restaurants where your catch up can take place. Which further explains its external focus. Ultimately this app wants you to pull out your wallet — and buy a drink or two. 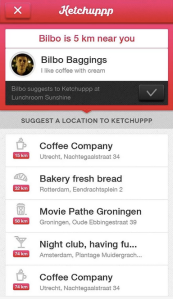 That’s not its only planned revenue stream. Ketchuppp also intends to charge for the app, although it’s currently free (and presumably would only switch to paid if it gained enough traction to generate demand). Charging is a pretty big gamble with this sort of network-based social tool since its usefulness is intrinsically attached to the extent of its usage. If your friends aren’t using the app, it’s not going to be at all useful for you. And zero Ketchuppp-using friends is currently its problem in my case.

Building out a significant user-base to generate momentum is the obvious high hurdle. The app offers a button to click to invite individual contacts to join. While that sort of individual invite mechanism has worked well in the past for growing out mobile messaging networks like BBM, it’ll need a substantial viral network effect to kick in if it’s going to take off.

Happily it’s not (currently) using the kind of spammy viral marketing tactics that video chat app Glide has been called out for. I can confirm Ketchuppp did not mass spam anyone in my contacts book when I signed up. Even if it probably needs to. But then if you’re an app complaining about how digital is dominating real life then acting all spammy to draw attention to yourself would be a tad hypocritical.

What it is doing to spread the word is using a variety of offline and online advertising and marketing tactics to try and build an online community. “We are trying to join conversations on radio-stations, TV-shows and newspapers to share our thoughts (and our app) with the world,” it says. “We also give lectures for schools and businesses about the strengths and weak spots of social media and the importance of balancing it with real life contact. And off course we have the invite friend option from your address book within the app.”

How are those efforts to gain users going so far? Around two months since the apps launched it has managed to attract around 3,500 to 4,000 active users – and says that’s “growing everyday”.

Ultimately Ketchuppp’s makers reckon prevailing attitudes to social media are changing — with more people starting to feel fatigued by the demands to be constantly checking and the intangible rewards of virtually connecting with friends, instead of meeting them in person. With its re-active focus and deliberately streamlined feature-set, it’s positioning itself to capitalise on that tiredness.

Whether people are getting bored with Facebook et al. is hard to say for sure. But it’s certainly true that a lot more is going on outside the walls of the big social media fortresses – whether it’s SnapChat’s ephemeral messaging, or the huge growth in dedicated mobile messaging apps that allow for a more intimate kind of one-on-one communication. Such developments suggest there is at least an appetite for a new wave of social apps that do things differently.