A lot of great startups are revolutionizing the way we learn languages. There are plenty of situations you encounter while traveling or studying, however, that really just need a quick answer from a native speaker. For example, what if you are standing in line at a theater and suddenly realize that you have no idea how to say “Cloudy With A Chance Of Meatballs 2” in Chinese? That’s where social translation app Linqapp, described as a “human-powered Google Translate” by its creators, comes in.

Ask a question on Linqapp via text, photo or audio recording and a push notification goes out to all users who are fluent in your target language. A points-based reward system encourages people to provide quick and accurate answers. Linqapp works very well, especially for the most popular languages on the platform, which are currently English, Chinese, Spanish and Japanese. I asked “how do you say stevia?” and within four minutes, a user had not only given me the Chinese characters for both the plant and the sweetener, but also recorded himself saying both phrases in Mandarin. 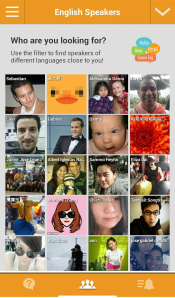 Linqapp is currently available for Android, with an iOS version coming in early 2014 (though most developers still release iPhone apps first, Linqapp’s makers wanted to leverage Android’s position as the top platform to grow its user base). Since its launch two weeks ago, the app has already signed up 10,000 users.

Developers Sebastian Ang and David Vega, whom we first met when they ran around Taiwan, began conceptualizing Linqapp when they were studying Chinese. While adjusting to life in Taipei City with minimum language skills, the two constantly encountered problems that no app or Web site could help them solve, such as handwritten food menus that flummoxed even the most sophisticated optical-character recognition (OCR) program or confusing public transit maps.

“The limits of computer-based translation are reached easily,” says Ang. “Bus schedules in Taipei are completely unreadable for foreigners. It’s a perfect example of how something like Google Translate can’t help you. It was a situation where I thought if I had just one native speaker to ask, that would be perfect. I could just take a picture of the schedule and ask ‘does this go there or there?'”

Ang sees social translation platform VerbalizeIt as Linqapp’s most direct competitor, though his app seeks to differentiate by being free (VerbalizeIt’s personal translation services start at $5.99) and serving as a social discovery platform. Linqapp fills the gap left by popular language apps such as Duolingo and Waygo by serving as a worldwide language exchange program and helping you understand questions that are as much about culture as language. 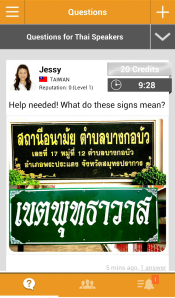 For example, recent questions targeted to Linqapp’s Mandarin speakers included “What is QQ?” (it can be a reference to Tencent’s messaging platform or slang for “chewy”) and “What is the Chinese title for ‘Machete Kills’?” The app currently monetizes by selling points packages. Ang says that he hopes Linqapp will eventually serve as a translation platform where users can offer language services for a fee. Use cases could include questions that are more complicated than the average Linqapp query, but too small to require a traditional translation agency or service (for example, translating an instruction sheet).

To use Linqapp, you can sign up with a Facebook account or email. Once you log onto the app, you are prompted to select your native language, the languages you are fluent in and the ones you are seeking answers about. Text questions can be asked for free, while queries with photos or audio recordings require Linqapp points (each user starts with free bonus points, and more can acquired by answering other people’s questions). Once you post your question, a push notification is sent to fluent speakers and a timer is set for 15-minutes so people who respond within the timeframe are eligible for points. You decide which answers are helpful and how many points you want to reward to the user. Each person has the option of filling out a profile and contacting other users (for example, I can envision using the app to eventually find other people in Taipei who enjoy U.S. cult films or “Breaking Bad,” based on the questions they ask and answer). Ang says Linqapp’s community is the most important aspect of the app and will help it compete as more crowd-sourced language platforms appear:

“Each new question is a way to start a conversation with people you didn’t know before. It’s more interesting than a social network. We hope to establish new friendships across frontiers and help make new ties between people who usually don’t have a chance to communicate with each other.”