Seattle-based Pirq, a digital loyalty and deals platform provider, is now moving away from the deal space entirely, the company says. In addition to deals, the startup had earlier been testing a digital loyalty program which includes smartphone apps that allow consumers to earn rewards at nearby businesses, and going forward, this will become Pirq’s sole focus. The loyalty platform was previously only available in the Seattle area and San Francisco, but as of this week, it’s opening up nationwide and is dropping to a more affordable price point of $14.95 per month.

“We never had a standalone loyalty product, you had to do the deals,” says CEO James Sun of the transition away from the deals space. In the past, businesses had to offer a certain number of deals per day with savings between 20% and 50%, which consumers could then locate using the Pirq mobile apps.

The company’s claim to fame came last spring, when it was outed as being used by Apple. At the time, Apple had signed on with Pirq to offer food and drink deals to its employees living in the Bay Area by way of Pirq’s iPhone app.

But now, times have changed.

The company even let go of all of its sales staff surrounding its earlier deal efforts.  “Nobody has ever tried this before without sales staff, it’s a big risk,” he admits. “But it’s working,” he adds. The standalone loyalty solution launched nationwide this week, and already they’ve gained 80 more paying customers in both the U.S. and Canada. The company already had 500 customers on its deals and loyalty platform before, who are now being transitioned to the newer, simpler product.

In recent months, there have been a number of startups that have been working to replace paper “punch cards” at small businesses like restaurants, bars and other shops, with their own digital solutions. (See for example, Five Stars and Belly.) But Pirq’s advantage over some of its competition in this space is that it doesn’t require any additional hardware or tablets in the store, nor does it require point-of-sale integration.

Instead, the process from sign up to launch on the merchant side is meant to take only minutes. The business owners sign up on the web by filling out a short form, then they can print out their temporary signage and merchant Tag (a scannable Microsoft Tag barcode) from their computer. That’s the extent of it. A merchant kit arrives 48 hours later with a few extra goodies including a 5×7 poster and “how to” cards for customers, for example. 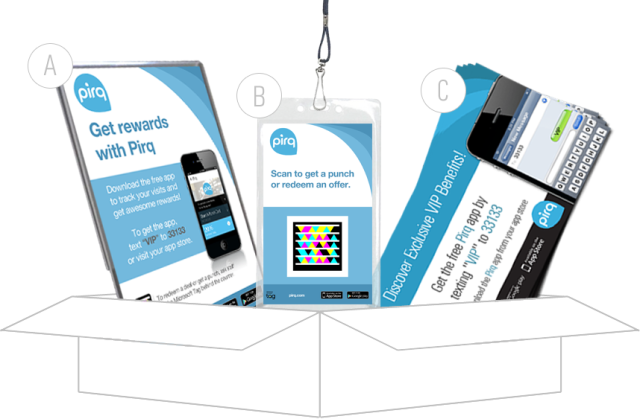 On the consumer side, customers download the Pirq app, then they can begin to scan the business’s “merchant Tag” while they’re in-store to receive their virtual “punch” on their virtual card.

As the customers begin to earn their punches toward whatever deal or discount the merchant offers, the businesses gain insight into their customers’ demographic and behavioral data courtesy of Pirq’s Facebook integration. What makes this interesting is that Pirq actually allows the merchant to use that demographic information to specifically target groups of customers that meet certain criteria, like females 35 and over, for instance. They can also run different campaigns at the same time for different groups.

Last fall, Pirq announced it raised $1.2 million in funding from existing investor Rally Capital in advance of its nationwide rollout. Today, it has downsized to twelve people as it makes this shift away from deals to loyalty, and is working on introducing real-time analytics to merchants’ dashboards.

These changes mean, however, that consumers won’t be regularly launching the Pirq app outside of the businesses they frequent, while looking for nearby offers and promotions. Instead, the app becomes more about having a one-to-one relationship with the business in question. But that’s reflective of the larger shift underway throughout the industry, says Sun.

“I firmly the believe the market is going to move away from deals. Consumers have deal fatigue,” he says.

The new Pirq for businesses is available here.