A few months after raising its $23 million Series B, mobile shopping companion Slice is receiving its first major update. The app, whose overall mission involves leveraging the email inbox as a source for commerce data, already offers the ability to track your order confirmations, shipments, online spending and price drops. Today, it adds another notable feature as well: recall alerts. In addition, the app is getting a redesign on iOS, Android and web, which includes a revamped interface, improved navigation, and an added tracking section for keeping an eye on price adjustments.

Obviously, that latter feature is arriving just in time – that is, right as the holiday shopping season kicks off, and item pricing fluctuates more heavily as retailers compete for consumers’ dollars with a variety of sales and discounts. 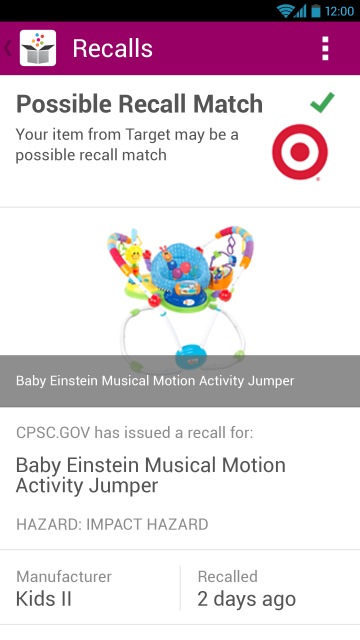 According to Thad Hwang, VP of Product at Slice, the redesign is meant to give consumers an increased sense of confidence that Slice is looking out for them, even if they don’t get an alert today or tomorrow. “We realized our users didn’t know about price drops, for example, until they got one,” he says. “We felt that ensuring people knew that the app was actively working on their behalf was especially important with the introduction of product recall alerts, so it made sense to schedule the redesign along with this feature.”

The recall alerts may be the more important feature with regard to this particular app update. The company explains that the idea for recall alerts came about because there are hundreds of safety-related recalls issued every year, but manufacturers often don’t have an easy way to identify consumers in connection with a specific product. Slice’s tracking capabilities change that, by cross-checking product recall information from the Consumer Product Safety Commission in the U.S., Slice’s target audience, with actual purchase data.

In the case that a match is found, Slice will send out a push notification in the app and/or email, depending on your settings. These will also link directly to the CPSC.gov recall page for access to the details of the product hazard in question as well as the list of steps to take next, and they include customer service phone numbers. 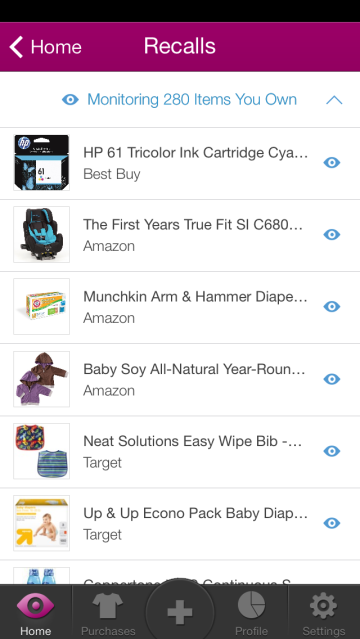 Tracking recalls is something that’s especially important for new parents, who have to keep an eye on baby product recalls, for things like car seats, cribs, strollers and more. But Slice is also limited in tracking everything you buy, since it can’t account for gifts (via barcode scanning, for example), or items bought with cash or at point-of-sale when no e-receipt is provided.

Slice only syncs up with your email inbox. That means it’s able to easily keep an eye on your online purchases where order confirmations arrive via email, mobile payments, as well as purchases from brick-and-mortar stores which offer e-receipts. Unfortunately, this isn’t the majority of most consumers’ purchases today, and Slice doesn’t offer any way for you to snap a photo of a paper receipt for import into its system, nor can it watch your bank account transactions more passively for tracking your broader purchasing behaviors.

However, Hwang argues that the nature of commerce, even in the offline world, is changing quickly. “We are seeing a fast adoption of e-receipts for offline purchases by major stores including Macy’s, Nordstrom and Gap. Purchases made with mobile payment systems are also showing up as e-receipts,” he says. “These two major trends are enabling us to show users more of their spend.”

The company has no plans to include OCR receipt support, Hwang adds, though Slice has not ruled out bank account integrations. At the end of the day, Slice is a big bet on a future where e-commerce, e-receipts and mobile payments dominate. It’s not even aiming for backward compatibility with the way consumers still largely shop today: with a swipe of a debit or credit card at checkout, then a paper receipt stuffed into a wallet and forgotten.

But what is interesting about Slice’s shopping app is that it’s different from many of the peskier apps that live on our smartphones today. These apps constantly send us almost spammy alerts about new friends, follows, sales, and other begs for attention. Slice, meanwhile, is content to run in the background like a smart assistant, only alerting you when there’s something worth noticing taking place. Slice is one of two apps the company has in production. Another, Slice Bookshelf, is a Goodreads competitor that uses both inbox and Facebook data to create a social community of readers.

Slice doesn’t currently offer details on its user numbers, actives, or app downloads, but the company says that it has now parsed 90 million transactions to date, equating to a total purchase value of $3 billion. For what it’s worth, those are the same figures provided by Slice back in August. At the time, the company had also hinted an updated version of its flagship product was in the works.