Makeably, the New York-based, custom-made goods marketplace that closed on seed funding from Great Oaks, 500 Startups and others earlier this year is now relaunching under a new, easier-to-remember name: Hatch. Alongside the rebranding, the company has also evolved the process by which consumers tweak and “remix” the products offered for sale.

The site, founded by ex-Googlers Ryan Hayward and Anastasia Leng, is similar to CustomMade in that it’s an attempt to connect everyday shoppers with artisans capable of producing custom goods.

But this summer, Hatch (then Makeably), made a slight shift to differentiate itself somewhat from its competitors. Leng explained that the majority of shoppers looking for custom items weren’t reaching out to artisans with detailed requests sprung out of their own minds, but were rather “remixing” existing products with small change requests. Around 90 percent were asking for minor adjustments – like changing the base material used in a product. For example, they might request a necklace in gold instead of silver. They may have also asked for slight changes to designs or sizes, among other things.

To encourage this culture of remixing, the company changed the site to better support user behavior. In a newly added side panel, customers were told to “Make it Yours” and could fill in a form where they selected the changes they wanted to request.

Today, Leng tells us Hatch is evolving things yet again. “Based on what we’ve learned from our buyers and makers, we’ve moved the customization process directly into the photograph,” she says. Users can now interact with hotspots over a product in order to make better decisions about how to modify it, and they’re presented with visuals about what some of their inputs would look like after doing so. 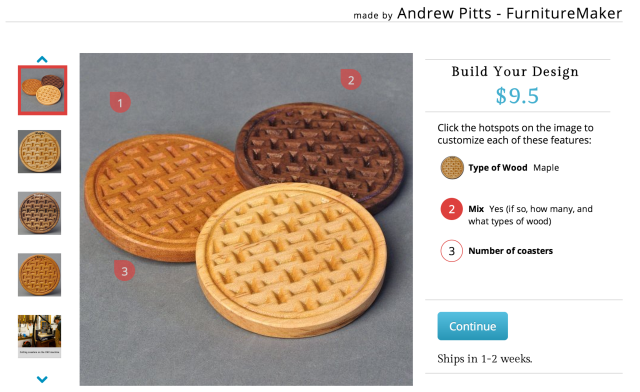 At present, users can select options from visual cues the makers themselves provide (like color or type of wood), they can choose from a drop down menu of options for things that don’t require visual cues (like size), or they can describe what they’d like (e.g. a message they’d like engraved), Leng explains. Soon, they’ll be able to drag their own hotspot over a product to better communicate to a maker what they’d like to personalize, too.

To do customization right, Leng thinks Hatch should make it easier for customers to understand what they can change, see what the change looks like, and immediately see the final pricing. “These are the principles that make your experience with a service like Moo, NikeID or event CustomInk a great one. But it’s not obvious how you visualize customization when you’re dealing with products that are made by a large number of individual artisans and makers around the world, as well as products that have never been created in the exact variation you want (but which easily could be),” she says.

In early tests, the company found user feedback about the new process to be positive. “We kept hearing users describe their behavior as not one of buying, but that of designing and creating,” says Leng. (You can try it here with customizing these 3D letters or these wooden coasters.) 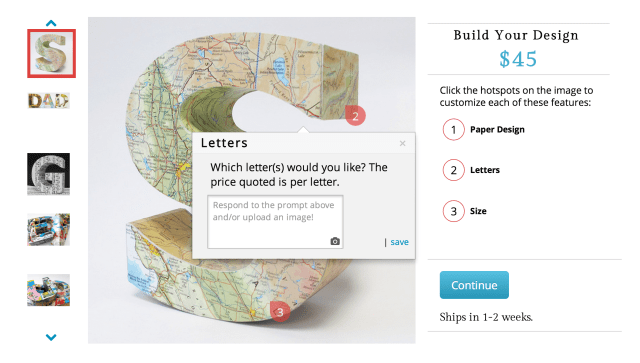 Today, Hatch offers 1,500 live products on its site, on average around two to three per maker, and the average price point has stabilized at $112, which Leng also notes is six times higher than Etsy’s. Eighty-five percent of makers have had at least one inquiry, 40 percent have made one sale or more, and 60 percent are full-time makers not hobbyists.

Meanwhile, on the buyers’ side, 30 percent are repeats, and 98 percent of those make their second purchases from a different category than their first. Since May, Hatch has grown 30 percent month-over-month in new makers and products, and has doubled its user base. The company doesn’t disclose users or revenue, but says that all orders today have come through organic search or referral traffic.

And now that the team is comfortable and has made the sell side of the business work, they’re going to focus on building up the demand side in the months ahead.

However, the question here is whether the maker movement and the market for those in search of custom goods online is large enough today to keep sites like Hatch afloat for as long as it would need to see this thing through. It’s also interesting that they compare themselves to Etsy, a much larger maker marketplace which recently went through growing pains of its own, despite achieving profitability back in 2009. Hatch may have successfully market-tested how custom goods sales can work online, but there’s nothing stopping a larger player from implementing similar technology of their own (or even acquiring Hatch if the startup runs out of runway, perhaps).

In other news, Hatch was previously working out of a maker co-working space in Brooklyn called 3rd Ward, which shut down earlier this month, after giving Hatch less than a week to find a new home. They’ve now put an offer down on a space in Chelsea, which would bring them into Manhattan.