The ITU has recently published figures noting 2.7 billion internet connections globally, and today Akamai has released some numbers pointing to how fast those connections actually are. The company, a specialist in traffic optimization, says that we have now reached a tipping point of sorts: half of all connections made to its network are currently running at 4Mbps or higher — a sign that “universal broadband” is finally starting to become not just an ideal, but a reality. The figures come from the latest installment of Akamai’s State of the Internet report, which crunches numbers based on some 1 billion connections made into Akamai’s traffic optimizing network and also covers other subjects like security trends and mobile internet usage.

Here’s a rundown of some of the standout highlights:

That will likely sound like a blast from the connection past for some readers, because while currently the global average connection speed is 3.3Mbps, Akamai notes that the leading nations are seeing speeds that are significantly faster. Top of the list, consistent with the ITU’s reporting, is South Korea, which Akamai says is clocking average internet speeds of 13.3Mbps — although that is actually down by 6.4% over a year ago.

(Why down? Akamai doesn’t directly explain but I’d hazard a guess: with the gradual switch to smartphones and tablets and away from PCs, people are relying more on cellular networks to access the internet. In countries that were very early moves in fixed internet like South Korea — a trailblazer in fiber-to-the-home implementations — that will actually drag average connection speeds down.)

“Half of all connections to Akamai occurred at speeds of 4 Mbps or higher [is] a 25 percent increase since the first quarter of 2012,” writes David Belson, the report’s editor. Perhaps more to the point, the number of countries and regions with average speeds of 1Mbps or less are continuing to fall. They are now down to 11 countries, from 14 last quarter. “These positive trends bode well for the continued increase and adoption of broadband connectivity around the world.” 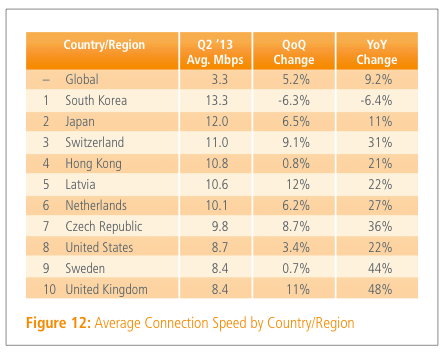 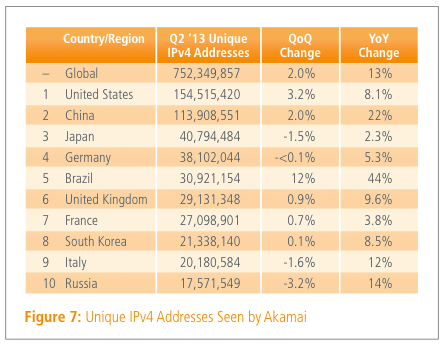 Akamai, focused on helping things zip around as fast as possible, also by default also tracks what is liable to slow that down. It notes it observed “attack traffic”, which will mean things like distributed denial of service attacks, come from some 175 unique countries or regions, and of those, Indonesia came out on top, growing its share of attack traffic by two-fold to 38% of all attacks. That helped it overtake China, which accounted for 33%, as the top attack dog. While the U.S. may be the target for many attacks, it’s increasingly become the origin of them: it’s down by 1.7 percentage points to 6.9% of all attacks. As a sign of the disproportionate activity from certain countries, that percentage was high enough to put the U.S. into third place after Indonesia and China. Akamai notes that its system is set up to see the IP address of an observed attack but “cannot determine attribution of an attacker.”

Indeed, when it comes to what regions and categories are seeing the most attacks, it looks like the crime follows the money. The Americas, and the U.S. specifically, saw the most DDoS attacks in Q2, and enterprise services are proving to be the most vulnerable, with e-commerce coming in at a close second. 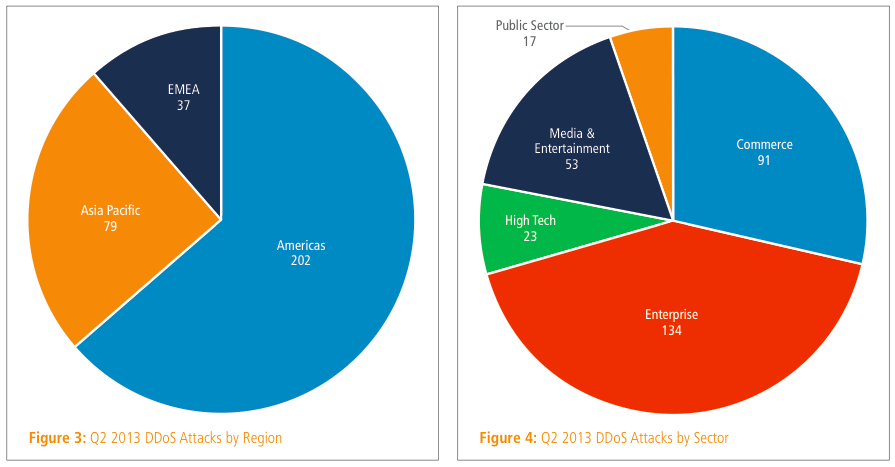 Breaking that out more, within enterprise, business services are taking the lead in DDoS attacks: Akamai says that this is the first time they’ve been in first position. Akamai notes that this was influenced specifically because of malicious activity in the Asia-Pacific region specifically. Additionally, this is the first time that pharmaceuticals and healthcare have made their way into the rankings — one of the downsides in the going growth of e-health services (and something for those companies to get more aggressive in trying to guard against as they grow).

The commerce threat, like the one in e-health, also underscores the ongoing trend that of e-commerce and how it is growing in ubiquity. Akamai notes that unlike business services, these attacks happened worldwide and were not concentrated in a particular region. 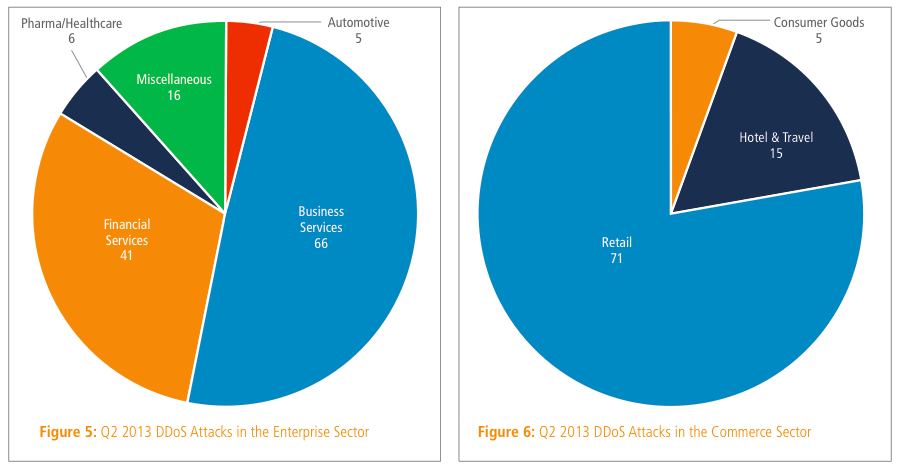 Akamai tracking of which browsers are being used the most from mobile devices underscores two of the bigger trends in mobile adoption: Android may be the world’s most ubiquitous browser, but Apple’s devices are still more popular in terms of usage overall. Akamai notes that when it looks at access from mobile devices over cellular networks, Android Webkit is just edging out Mobile Safari, with other browsers trailing quite a ways behind. Webkit, it notes, accounted for 38% of requests, while Safari 34%. When usage was tracked across cellular and other networks (for example, broadband via WiFi), Safari shot into the lead, with 54% of all requests and Android Webkit at 27%+. This could partly be attributed to iPad usage; perhaps also just to the fact that while iOS owners may be proportionally smaller than Android device owners, when you take into account all kinds of usage, they are simply just using their devices more.

Akamai also notes that average connection speeds on mobile networks are now ranging from between 9.7Mbps to 0.5Mbps. Akamai doesn’t track this itself but notes that Ericsson says that mobile data traffic volume grew 14% in the last year, while voice traffic was up by only 5%. 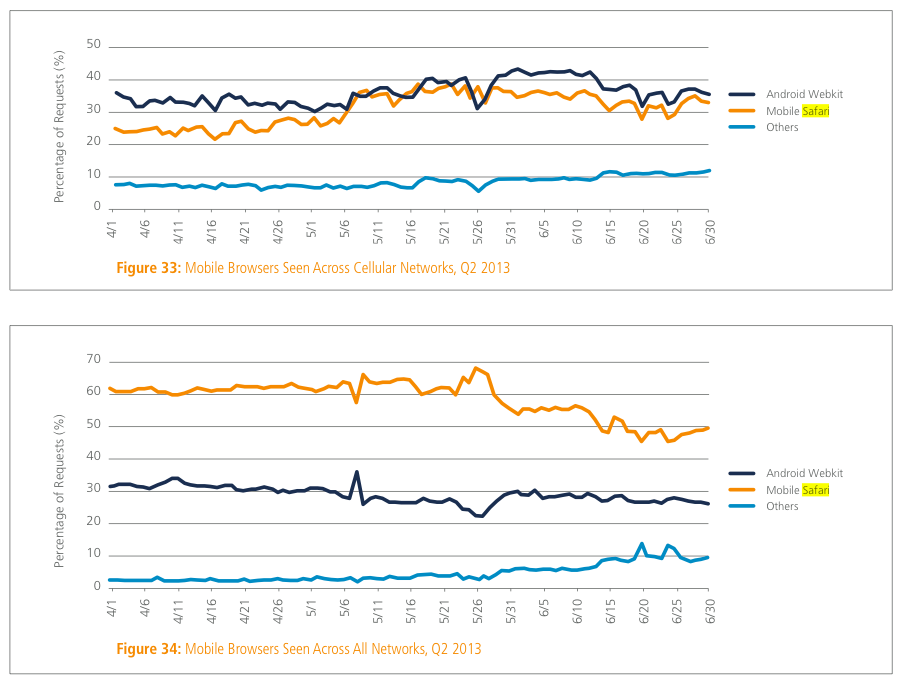