When you become a parent, you suddenly realize everyone has an opinion on how that job should be done, from well-meaning in-laws to strangers who walk up to you in the mall and lecture you about the health benefits of breastfeeding. (True story.) It can be a bit overwhelming. A new startup called MommyCoach wants to help parents and, as the name implies, specifically mothers, learn from experts on a range of topics related to their new lives, sharing not only tested parenting advice, but also information on subjects like food and nutrition, health and fitness, life and work, and more.

The company was founded by CEO Christophe Garnier in partnership with children’s class and activity facility Kidville, which has an equity stake in the company. Garnier is a serial entrepreneur who previously co-founded a kid-focused flash-sales site called Totsy (assets acquired by Modnique after investors turned down a $75 million acquisition offer in 2012, Garnier says), and a digital marketing agency called mSmart before that.

He explains that the idea to build yet another service targeting moms came directly from the time he spent at Totsy. “I was in constant communication with the mother’s audience [at Totsy],” says Garnier. “We were getting a lot of feedback and questions from moms, and a lot of the questions we were getting were not really related to what we were doing, which was retail. It was odd.” 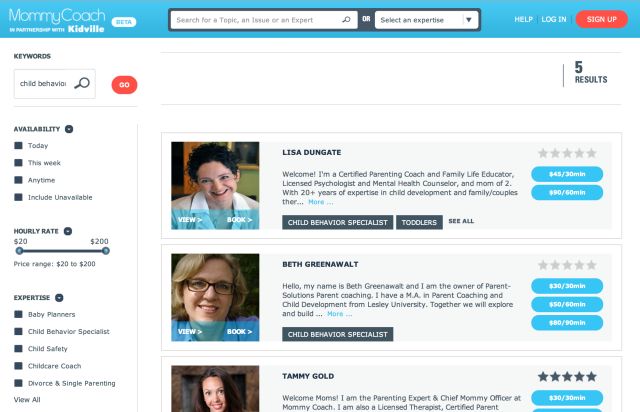 After Totsy’s shutdown, he began researching the “mom’s Q&A” market, so to speak, and found that the majority of the big-name sites like BabyCenter or CafeMom, for example, were relatively static. These sites and those similar to them largely consisted of articles for parents to read, and if they were interactive, it often involved a forum where moms talked to other moms for advice and support.

At launch, MommyCoach offers a database of a couple of hundred “coaches” who are vetted ahead of their approval by a panel of four moms: licensed therapist Tammy Gold, nutritionist Keri Glassman, personal trainer Lindsay Brin, and life and work expert Lara Galloway. These coaches can then offer online video chat sessions of 30 or 60 minutes in length to interested moms on a variety of topics, from the pre-parenting days during pregnancy to life/work balance or stress reduction techniques – which we all know is what comes after.

Coaches price their own sessions, starting at $20 per session and up. In the near future, group classes will also be made available, allowing for more affordable rates.

In addition, to encourage user engagement on the site, MommyCoach gives out rewards from a selection of 25 brands, like 1800Flowers, Bulu Box, Bluum, Sproutkin, ThredUp, and other online businesses. Moms earn the points by completing sessions, inviting friends, writing reviews of their sessions, and other activities. 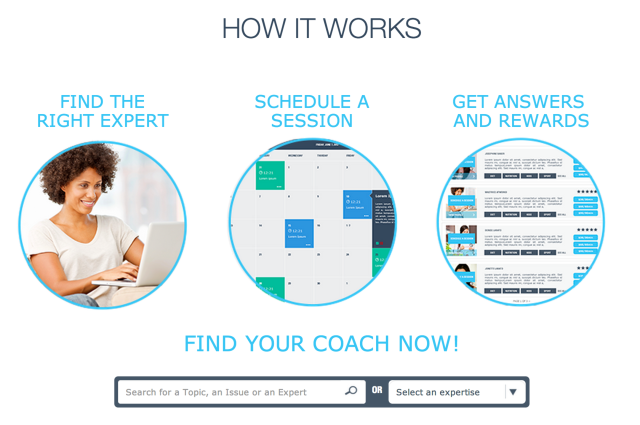 The idea of expert marketplaces is not new. There are those focused on education, teaming up developers, learning new skills, getting legal help, self-improvement, and more. But it’s fair to say that there’s not a market leader in the “parenting coach” video chat space at this time. There’s also some question as to whether there ever will be – after all, the thing about parenting is that it’s a major time suck when done well – setting aside an extra 30 minutes to an hour could be tough for moms, and especially working moms. And getting them to pay for sessions on a web filled with free advice for the googling is another challenge for a startup like this to overcome.

The site today is also skewed toward topics of the self-help variety, with only one of the top four overall categories (parenting and education, health and fitness, diet and nutrition, life and work) truly focused on the business of parenting, the developmental stages, and the problems that arise therein. While health, fitness, diet and “empowerment” matters are also important to moms (or anyone, really), they probably account for too much of the site’s content at present.

Meanwhile, MommyCoach is short in coverage on those more serious subjects that parents spend hours researching online regarding the behavioral and medical sides of childcare. For instance, there are only five “child behavior” specialists listed right now, and these experts are at best licensed therapists, which can still be a hit-or-miss experience. The site is also lacking the medical opinion provided by doctors who contribute to competitors’ sites, or are well-known enough to establish brands of their own.

So while the service will be useful for a broad range of topics, it’s not yet comprehensive. But Garnier says that MommyCoach will broaden its reach as early as next year to address some of these holes – the site is only launching in beta for now.

Update: 10/24/13: Garnier corrected his earlier statement about Totsy acquisition offer. Was $75M, not $100M as he previously said.