In what is a poignant statement about the state of Android tablet apps, Twitter has announced the first tablet-optimized version for the platform. It’s been 3 years since the iPad hit and Android tablets have blown up in the meantime, but this is the first time they’re being served with a real app.

Twitter says that the app is rolling out on the Samsung Galaxy Note 10.1 first but will roll out to other Android tablets by the end of the year. Twitter says that it’s included some Samsung-specific features like multi-screen view for the in-app browser, a Twitter widget for the home screen that allows basic twitter actions and shows breaking news customized to countries. 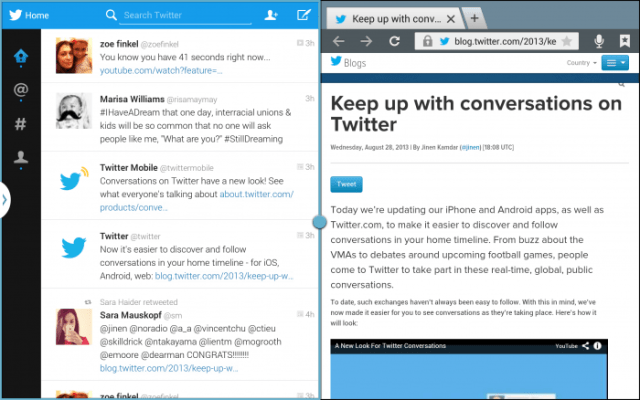 There’s also a ‘tweet illustration’ feature that lets you doodle on pictures with Samsung’s ‘S-Pen’.

One of the strengths of the Android platform is that most of its phone apps will run just fine on tablets, due to flexible layouts and encouragement early on from Google to build them that way. But since the early days of Android, the tablet market has exploded and Google has changed its tune. It has begun encouraging developers to produce tablet-specific layouts for their apps, providing for better experiences on larger screens.

Much of the impetus for this is the fact that there are an incredibly small number of apps on Android that are designed with a tablet in mind. On Apple’s iPad, there are thousands.

Apple CEO Tim Cook has specifically called out the Twitter app for Android before — and on a Samsung tablet no less. At the iPad event last year, Cook showed a slide of the Twitter app on Android and said “It kind of looks like a blown-up smartphone app, because that’s exactly what it is. Compare that to Twitter on iPad.”

Ironically, at the time, Twitter’s iPad app was a unique flower with a cool card-based interface. These days it looks a lot more like its iPhone app and website.

During a Businessweek interview earlier this year, Cook had this to say about the state of Android tablet apps:

I think if I bought [an Android tablet] and used it, and I thought that was a tablet experience, I’m not sure I would ever buy another tablet. The responsiveness isn’t there. The basic touch is really off. The app experience is a stretched-out smartphone kind of experience. It’s not an optimized experience. However, that said, I have always said that the tablet market was going to surpass the PC market. I was saying that well before it was viewed to be sane to say that. It’s clear that we’re 24 months away from that.

The feeling that Android tablet app experiences have lagged far behind those on the iPad may not be a popular one, but it’s accurate. A head-to-head comparison between Android tablet apps and iPad apps from last year makes the problem incredibly visible. 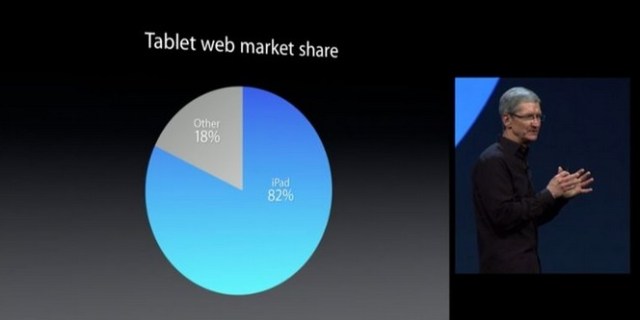 Android-powered devices continue to slice out an increasingly large percentage of the tablet market, but continue to trail hardcore in usage figures. Google needs to encourage more companies to customize their apps specifically for tablets like the Note 10.1 if those usage numbers are going to turn around. Remember, Google makes nothing from Android proper, it makes money if people use those tablets for stuff, like browsing the web and using apps. If Apple continues to maintain what it claims to be an 82% share of web traffic, Android tablets are going to contribute nothing to Google’s bottom line. Honestly, with those kinds of usage numbers, who could blame Twitter for dragging its toes?

Still, Samsung appears to be selling a decent chunk of them, with an estimated 18% of the total market, so it’s a good place to start. Now where are the rest of the Android tablet-optimized apps?