PeeqPeeq, a mobile and tablet application that lets users “shop their email,” is launching its first major update today, after initially debuting its email-based catalog on iTunes just last month. The update expands the app’s reach beyond Gmail, to now include all of the Microsoft email domains, like Hotmail, Live and Outlook, while also offering a revamped look and feel for iOS 7 as well as badges support, so you’ll know when new deals have come in.

The app has arrived at an interesting time for email marketers, who have reportedly been experiencing a downturn in email open rates following the introduction of “tabs” in Gmail, the widely adopted free webmail service Google provides. In the new tabbed Gmail inbox, emails from retailers and other merchants are shuffled off into another section labelled “Promotions,” which end users can browse through at their leisure. No longer can email marketers rely on timing the arrivals of their emails to hit inboxes in the early AM, hoping to grab eyeballs when consumers open up their email first thing in the morning. These days, who knows when users are browsing through their email deals? And from early reports it seems that fewer users are clicking through at all. 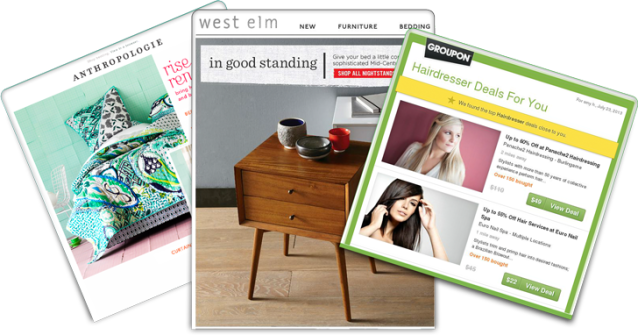 PeeqPeeq is taking advantage of this change in consumer behavior with an app that takes the concept of browsing through promotions on your own time, but packaging it in a way that makes the task more enjoyable. Its app digs into your email inbox, and surfaces all the promotional shopping messages – the emails from the various department stores, airlines, e-commerce shops, etc. you’ve likely (or inadvertently) signed up for – and organizes them into a mobile catalog you can browse from your smartphone or iPad when you’re ready to really shop. The experience is more akin to using Flipboard than it is email triage.

These promotional mailings are the messages that you think of as junk when they interrupt your train of thought and workday correspondence, currently. It’s sales at Macy’s, new shoes from Zappos, electronics from NewEgg, Groupon deals, dresses from online retailers, and so on. But in the PeeqPeeq app, you can see these deals at a glance, organized six per page, and filterable by type (e.g. women, men, kids, travel, home & kitchen, etc.) You can also bookmark those you like, and share them with others.

To make this all happen, PeeqPeeq moves messages out of your inbox into a dedicated folder in your main inbox. But the app isn’t limited to only those emails you personally subscribe to. On its backend, the company has opted into all the promotional newsletters you could ever want, allowing you to browse through categories where you may only occasionally have an interest.

With today’s update, users can finally import deals from other inboxes, including Microsoft’s mail service – which, let’s face it, is often used as the dumping ground for all those emails you don’t want cluttering up your main Gmail inbox. It will also let you know when new deals have arrived with iOS’s red badges, though not with buzzy push notifications. 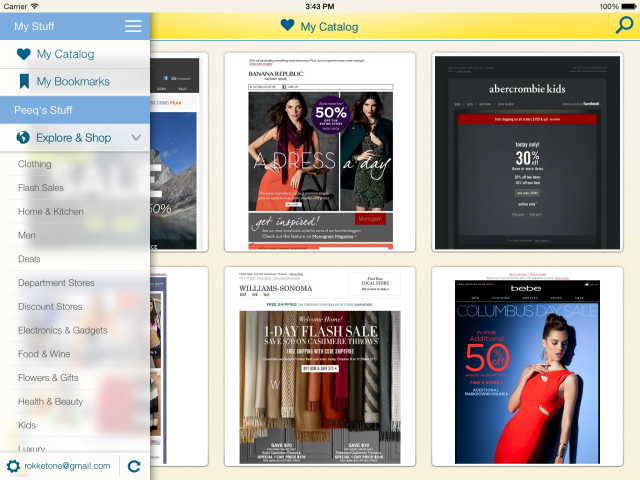 Company Now Attacking The Next Email Problem After Promotions

While PeeqPeeq will have some appeal to those who do a lot of online shopping, the company’s vision is broader than just this one email category. In fact, explains CEO Lee Ott, his company RokketLaunch is actually rethinking email not by “killing it,” as some companies have tried and failed to do, but in leveraging its data for new products.

Reinventing email is a challenge few startups are willing to take on for a number of reasons, but one of the toughest hurdles to overcome is getting email users to change years of ingrained behavior. That’s why it’s impressive when startups like Mailbox, whose gesture-based mobile email app was sold to Dropbox for $100 million, actually generated enough traction to become notable. Getting people out of their preferred inbox is very hard to do.

“If this is the state of the art, this sucks” says Ott, referring to the way most email is handled today, “But I can’t kill it. [Email has] two and a half billion people using it. But maybe I can just change it. Maybe we can use the inertia that it has to do something really different, where it won’t feel like you’re abandoning email. It will just feel like a subtle change. And that subtle change rippled out over time will be a really big change,” he says.

The company already has two other products in the works that are using this “big data” store found in the inbox. One is now in alpha testing, and while Ott won’t offer details on what it is, he would say there are plenty of other areas you could take on in the inbox, including things like electronic bills and receipts, shipping notices, non-promotional newsletters, social messages and updates, and more. The beta should begin to ship in the next couple of months. He’s not sure if people will really get it, but if it works, it could “totally blow up,” he claims. The only hint as to what it might be is this: RokketLaunch is attacking the biggest inbox problems in order, meaning those that occupy the highest percentages of user inboxes.

“Email’s weakness is actually its biggest strength,” explains Ott. “A massive volume of content that’s getting funneled to you – what if the volume is actually the thing that makes it valuable?,” he wonders.

It’s a different way of thinking about the email problem, where so many startups are trying to help you have less mail, by better managing your inbox, speeding up triaging, helping you opt-out of emails, and more. Of course, anything related to email is a huge experiment and risk, which is why startups so often avoid the area entirely.

Ott, whose background involves time spent as head of mobile and other products at Yahoo, as well as head of product for webOS at HP, has raised $1.25 million from his own network of connections, including Jerry Yang’s AME Cloud Ventures, Ash Patel (Morado Ventures), Jon Rubinstein, Farzad Nazem, Hank Vigil (SVP of Strategy and Partnerships at Microsoft), Adrian Aoun (Wavii, sold to Google), and others. The investors, to be clear, were funding not just PeeqPeeq, but the company’s larger goal of shifting inbox behaviors to new experiences.

The updated PeeqPeeq app is live now here in iTunes. As for the rest, stay tuned.