New York-based Hubbl, a maker of app discovery and personalization technologies, has been snapped up by mobile ad platform Airpush for $15 million, the companies are announcing today. The two businesses will combine their respective efforts – Hubbl with its personalized native ads technology and Airpush with its ecosystem of some 120,000 mobile apps – to create a new, native advertising platform for mobile.

Hubbl originally grew out of the efforts of TechCrunch Disrupt NYC 2012 finalist Hmmm, which was originally working a startup in the social networking space before pivoting to app discovery. The company found app discovery to be a tough business as well, however, and had been transitioning toward its B2B offerings more so than its consumer-facing mobile app in recent months. Hubbl was also challenged in raising a round, from what we’ve heard, with investors spooked by the app discovery market as a whole, despite Hubbl hitting the usual milestones that would have otherwise led to at least a seed stage deal. 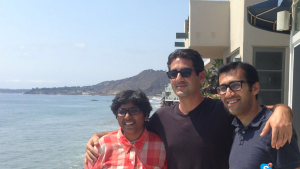 But given that the full team will now be able to continue their efforts within the folds of a larger organization (Airpush is over 160 people) after going from bootstrap to acquisition, it’s not exactly a terrible outcome for everyone involved.

Hubbl’s co-founders Archana Patchirajan and Kushal M. Choksi will remain in New York, while the majority of its 25-person staff will stay in India. They will operate somewhat independently from Airpush itself – that is, they’re still continuing their product efforts as they would have otherwise, for the most part. This wasn’t just a talent acquisition in other words.

Now at AirPush, the Hubbl team is working on a new product, the founders tell TechCrunch, explaining that it will take advantage of everything they’ve learned over the years building tools for app discovery, and later, more personalized app recommendations, followed by a B2B app distribution product.

In its earlier days, Hubbl’s consumer-facing app allowed users to “hashtag” apps to help categorize apps in ways that the app publishers themselves may not have thought of – for example, a note-taking app may have seen a number of users adopting it specifically for “grocery lists.” This concept helped Hubbl initially build an app database where apps were grouped by how they were used, rather than more traditional rankings like downloads or revenue figures, like on iTunes.

Later the company moved more toward personalized app recommendations, and in early 2013, it was working on another new product called  “Spacebar” – a B2B offering involving partnerships with publishers and other content distribution networks, allowing them to distribute apps in a more contextually relevant fashion. That is, if you were reading about fashion or sports on your mobile phone, you might see an app suggestion pointing you to related fashion or sports apps you could download.

Now the team is developing a native ad solution for mobile in the form of an SDK and API. “Our hashtagging helped us create this precise profiling, user segmentation and targeting capabilities, and we merged that with our content-first approach, and we’ve taken both of them to create a native platform…we’re using everything we’ve done so far, but we’re using it for a much broader purpose than just app discovery,” says Hubbl co-founder Kushal M. Choksi about the product, which they expect to release into beta this December.

The company doesn’t want to reveal the exact details about how the native advertising solution will work on mobile for competitive reasons, but generally speaking, it’s an attempt to rethink how this trend toward native ads on the web can work on smaller screens. The ad SDK involves a content-based approach to advertising, where instead of interrupting the mobile app experience with banner ads or interstitials, ads feel more like part of the app itself, and are something users might actually want to clickthrough on and engage with.

Hubbl has been testing the SDK with sixteen developers so far, and early results in clickthrough rates have been “encouraging,” the founders tell us, though declining to speak on the record about the exact percentage due to the product’s early stage.

“Native is not just about positioning. It’s the content, relevance and personalized targeting that makes a world of difference when it comes to consumption behavior on mobile,” explains Choksi.

The SDK, which will be free for developers, will work for nearly any sort of mobile application, including things like games, entertainment apps, productivity apps, personalization apps, and more. App developers interested in testing the beta can sign up for news on the company’s homepage here for now, with further details to be announced closer to year-end.

Airpush says that they expect to release the product to app publishers by January 2014, where it will be able to help increase the earnings for those building both iOS and Android mobile apps.

Today, most companies that market themselves as native ad businesses aren’t really focused on mobile though they all support it, which may allow Airpush to have a jump on the space with Hubbl. An exception, and possible competitor, however, may be Namo, which announced $1.9 million in funding this spring, but has yet to launch its product to the public.