Holiday attractions booking startup, GetYourGuide, which raised a $14 million Series A at the start of this year from Spark Capital and Highland Capital Partners Europe to internationalise its content and zero in on mobile, has made good on the latter portion of its plan — with the launch of its first mobile apps (available on iOS now, and Android ).

The startup, which was founded back in 2009 as a student project, does not break out user numbers yet. But Reck confirms it’s continuing on a growth trajectory: “We are more than doubling revenue and traffic every year.”

GYG’s new apps pull in info on more than 23,000 tours & activities — such as museum visits, sightseeing trips & historical tours, mixed in with some more practical tourist requirements like airport transfers — from 2,200 global destinations, presenting them initially as a stack of thumbnails that can easily be thumbed through (offering more info as users drill down).

As well as repurposing its content for speedy mobile delivery, there’s the added mobile bonus of being able to detect the user’s location to make relevant suggestions. Users can browse activities for the current day, the next day or the weekend; read reviews and make bookings. Tours can be filtered by price, deals, duration, languages and more. The app creates a mobile voucher (such as the one below, right) for bookings, so there’s no need to print tickets. Payment is by credit card, with the option to save card details to speed up future bookings. 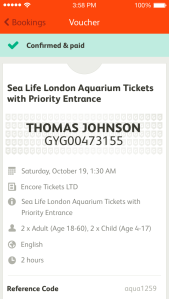 Back in January Reck told TechCrunch GetYourGuide was “going to bet the house on mobile”. Since then it has acquired deadpooled rival Gidsy — which had also been gearing up for a mobile push. GYG absorbed Gidsy’s team of 12, bolstering its apps push with relevant experience.

At the time of that acquisition, Edial Dekker, CEO and co-founder of Gidsy, told TechCrunch: “We’ve also been working a lot on mobile in the last months, but we did not launch it yet. We’ll have a huge opportunity to work on the same problems we tried solving in the first place: bringing people together around activities.”

Discussing the timing of its apps launch, Reck said previously, in the continental European markets where it is “particularly strong”, use of apps by travellers to get holiday suggestions has been retarded by factors such as mobile roaming charges. “With our increasing presence in the U.K. & U.S. and an exploding number of consumers taking the phone with them while traveling, now is the right time,” he tells TechCrunch.

“The European Commission announced that roaming will be significantly regulated within the next two years,” he adds. “We are seeing better price plans every year and the telecom operators are very interested in striking deals with travel companies to provide better consumer service. Again, I think the time has come for mobile travel applications to become mainstream. It makes so much sense.”

GetYourGuide’s app feels slick and relatively quick — with a cute bounding dog animation to keep you entertained while it harvests relevant tour data. However that content isn’t going to excite more discerning travellers, with a strong focus on more typical touristy fare.

For instance, when I queried the app for London attractions, it fired forth a barrage of tourist trap fodder, from Madame Tussauds to Hard Rock Cafe via a smorgasbord of Harry Potter tours. (And, bizarrely, several day trips to Stone Henge. Which isn’t exactly close to London — but is apparently a mainstream draw for U.K. visitors.)

This sort of content suggests GYG is gunning for the ‘road-well travelled’ tourist — which is, after all, likely the largest market. But that does mean it’s leaving room for alternative travel startups serving a more indie traveller category, such as U.S.-based AnyRoad. 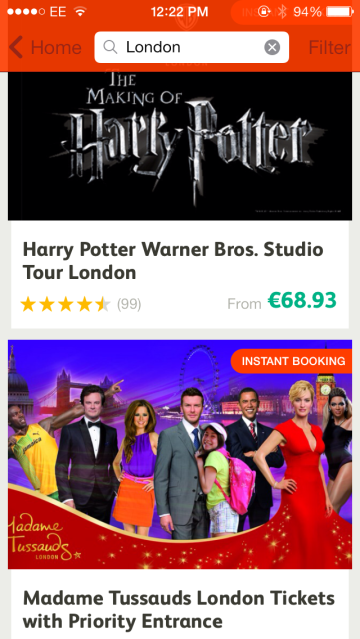