Although there are a number of mobile applications working to replace the printed guidebook for conferences and events, there’s no all-out market leader at this point. In addition, a number of the companies building conferencing apps are focused on larger events, with pricing plans to match. Today, a startup called EXMO is launching its own take on a mobile events platform, with a more social app initially targeting events with fewer than 1,000 attendees.

The company, founded by Todd Goldberg and Karl White, emerged from a Startup Weekend event – which is also just the kind of event that could use an app like this. During its beta period, EXMO was used by 14 Startup Weekend events, in fact, as well as dozens of other smaller-scale or grassroots events, including things like Barcamp, hackathons, food and wine conferences, and more. In total, EXMO has run 100 events to date, with thousands of total attendees.

Today, the company is taking the app out of beta, with a number of new features and integrations. Already, EXMO offered several things making it more interesting than some competitors’ apps which only mirror a paper event guide on mobile. Instead, EXMO’s focus has been on allowing organizers to better engage attendees within the app, says Goldberg, who explains that EXMO allows for features like feedback, real-time polls, and other social integrations.

At present, EXMO offers Twitter integration, and with today’s launch, event organizers who enter their information on EXMO’s site can use an “Activity Wall” option, which allows them to display social media content (e.g. Twitter, Instagram, Vine, etc.), event content (speakers, sessions, announcements), and polls using TVs and projectors. The Activity Walls are customizable and colorful and can also help to engage attendees who haven’t yet downloaded the mobile app itself. 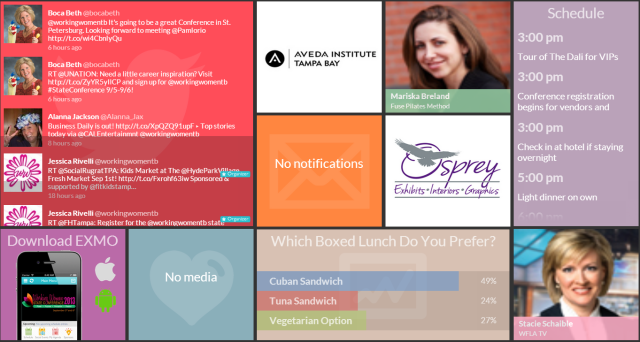 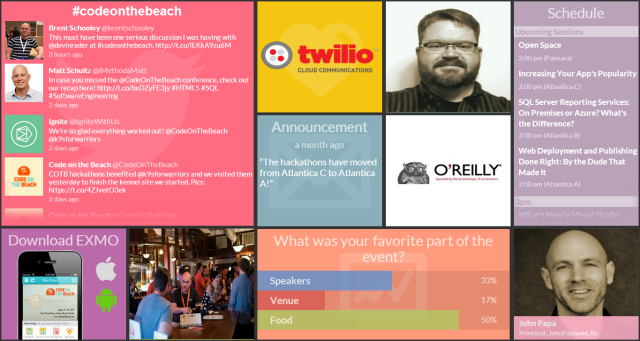 Another feature that helps to differentiate the app from others in the space is its support for user-created social events. “Let’s say attendees want to plan their own happy hour or meetup while they’re at the event; they can do that through the app,” says Goldberg. “It’s a way for attendees to create their own ‘unofficial’ sessions.”

There are quite a few things EXMO is still working on, of course, given its early stage – the app has been in active development for roughly nine months, and until recently EXMO was just a two-person team. (Now there are a few more people helping out, but not full-time.) The company is working to refine the experience and design, better integrate Twitter and other social media services, improve the organizer analytics, and more. 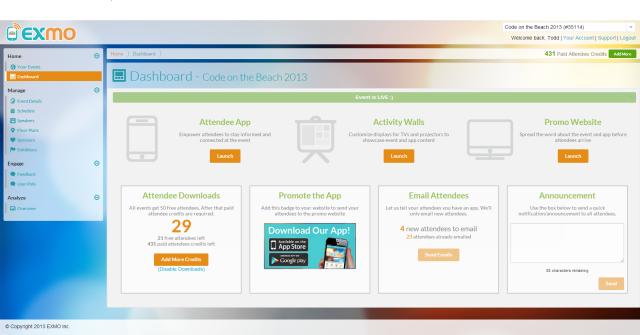 In the meantime, EXMO has partnered with EventBrite, which, incidentally, owns an events app of its own with Lanyrd. EXMO’s team is “launching” the app from the EventBrite offices today, in fact. With this integration, event organizers can now sell tickets in the app and on their promotional pages. (Currently, when organizers create their events, they get a promo page that they can share on social media or through email. These pages can also point users to the app download.) Ticket sales data from EventBrite have also been added to the event organizer’s dashboard.

EXMO’s pricing model is currently freemium-based with a free version of the app for events with up to 50 attendees. It’s then $2 per head afterwards, with the price decreasing the larger the number of attendees. Though Goldberg says it’s too early to discuss revenues, so far around 25 percent of the events it has run have been paid.

EXMO is currently bootstrapping, but may be looking to raise outside funding in a month or so to continue its growth.

Though there are many conferencing apps much further along than EXMO, including DoubleDutch (which just raised $10 million in Series C funding), Guidebook, Quickmobile, Cvent, plus more social apps like Bizzabo and Bloodhound, and several others, Goldberg says that EXMO’s product and strategy will set them apart. The app is flexible enough to suit a variety of events, while the focus on small to medium-sized events is an opportunity, he says. “There are more of those events out there like that, than there are the bigger ones. That’s where we’ve found good traction so far.”