Collabspot is a browser extension that promises to make life easier for sales teams by integrating Highrise and SugarCRM with Gmail. The Singapore-based company has been following a lean startup model, but recently accepted a seed round of $80,000 Singapore dollars (about $64,000 USD) from Louis Nauges, the co-founder of French Google Apps maker Revevol; Kevin Dewalt, a Beijing-based investor and Entrepreneur-In-Residence at the U.S. National Science Foundation (NSF); and Singaporean investment partnership 8 Capita. Collabspot says its new international network of investors will help it target new markets.

Laurent Gasser, Collabspot’s director of business development (and an investor as well as former mentor), says the startup will use its new funding to ramp up marketing and grow the customer relations team for its sales email platform. Most users are small- to medium-sized businesses and Collabspot’s aim is to make data entry as simple as possible for sales staff. Emails can be saved to Collabspot’s CRM platforms with one click and an entire company can view contact info, sales activity and manage new opportunities without opening Highrise or SugarCRM.

Gasser identifies Collabspot’s most direct competitors as companies such as Yesware or ToutApp, which also integrate existing CRM software into Gmail and focus on email tracking. 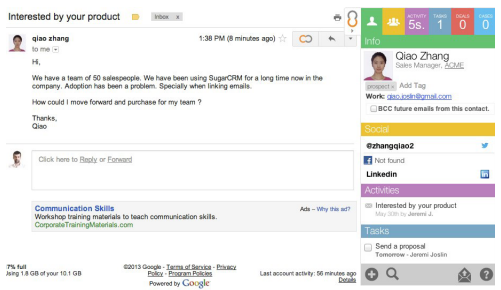 “We differentiate ourselves through a much tighter integration with the CRM as well as additional Collabspot features that helps salespeople to be more efficient. Eighty percent of sales rep jobs can now be done directly from within Gmail, which is not the case for our competitors,” Gasser told me in an e-mail. He adds that the startup plans to scale up by integrating more of the leading CRM platforms into Gmail and providing email automation to sales departments that will be comparable to marketing automation.

Collabspot says most of its current users are in the U.S. and it has doubled its paying monthly active user base to 1,000 in four months since June, when it completed the JFDI accelerator program. Dewalt and John Tan, a partner at 8 Capita, were among the startup’s mentors at JFDI.