You’ve been played before. You’re vulnerable and nervous about opening up again. It wouldn’t be the first time you’ve been lied to.

Back in 2011 we heard rumors that the iPad would be graced with Office’s presence in 2012, and shortly thereafter we saw an actual photo of Office on an iPad. But… nothing. And then some more nothing. Until today.

The company is finally letting Office 365 smooch up against the iPad. Steve Ballmer today revealed at a Gartner event in Florida that an iPad-friendly version of Office 365 is in the works. The iPad version will be released after a touch-first user interface is delivered to Windows-powered machines. According to the Verge, that special touch interface is “in progress.”

Microsoft has already let Office partially into the iOS ecosystem with the release of Office Mobile for Office 365 Subscribers (catchy name, huh?). This application is only available to iPhone owners who already have an expensive Office 365 subscription.

The Verge also claims that Microsoft COO Kevin Turner expressed the “need to own the productivity experience across all devices” in a recent company meeting, which makes sense considering Office is one of Microsoft’s best and most competitive products.

Expanding distribution of the software is smart, especially if it coaxes users to pay for the pricey Office 365 subscription in order to access it. Smarter still would be to offer a specially tailored version of Office 365 on iPad and iPhone for a hefty yearly price that isn’t quite as high as the full-on desktop subscription.

In either case, though, Microsoft runs the risk of slowing down its own lagging tablet sales. After all, the only slightly interesting advantage that Surface tablets have is Microsoft’s productivity suite. After Office is rolled out to all iOS devices, that advantage simply shrinks down to the fact that it’s free on a Surface. 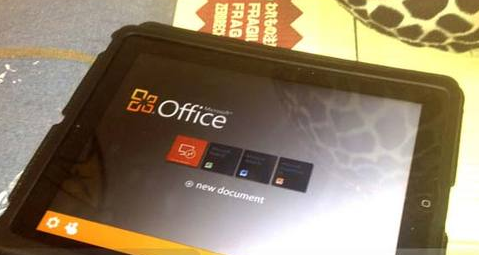