Even big companies have to pivot. American Express’ digital wallet platform Serve, which began its life as something of a PayPal competitor online before signing deals with operators for some sort of mobile play, is today returning to something the company knows best: plastic cards. With the newly revamped Serve launching today, consumers can purchase cards online or in-store, then add money to them via direct deposit, free cash loads in stores, bank transfers, or by linking a debit or credit card to the service. The card will work anywhere American Express is accepted, including at point-of-sale, ATMs and on e-commerce sites.

The physical cards themselves were previously available, but users would first have to sign up online to receive the card in the mail. While that option is still available, by placing the cards on retailers’ shelves and allowing them to load them with cash at checkout, Serve is able to target those who don’t have regular access to a computer.

Beginning in November, consumers will be able to load their prepaid Serve cards by taking cash to the register at over 14,000 participating CVS/pharmacy and 7-Eleven stores. Initially, cards are available online. By the end of 2013, American Express says cards will be available at 20,000+ stores, including select CVS/pharmacy, Family Dollar, Office Depot, Walgreens and Duane Reade stores in the U.S.

The company emphasizes that its prepaid card (purchased for $2.95 in retail stores, but free through year-end and online) can be loaded with cash for free, versus the 41 percent of consumers who currently pay fees of $3.00 to $3.99 to reload their cards today. Instead, Serve will charge a $1 monthly fee as of Dec. 3, 2013, which is waived for direct deposits or other deposits of $500 or more during a monthly statement period. 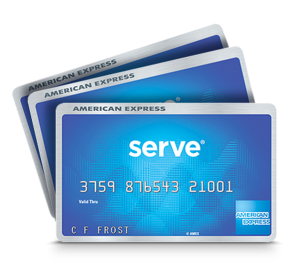 This is a strategic shift for AmEx Serve, which is now targeting the so-called “under-banked” population – that is, those who either don’t have traditional bank accounts, or who tend to pay more often with cash than with credit or debit cards. In addition to being able to load cash onto their cards for free, they’ll also now be able to add paychecks and government disbursements directly into their Serve accounts using Serve.com. Later this year, the platform will also support mobile check capture, allowing consumers to load checks, including non-payroll checks, using their smartphone.

Though American Express has refocused from its earlier efforts in competing directly with PayPal online as a digital wallet platform of sorts, it’s still following in its rival’s footsteps to some extent. PayPal last December also announced prepaid “Cash Cards” sold in retail stores, but the difference there is that the cards were designed to allow cash-preferred customers to shop online with PayPal, not as a full-on replacement to traditional banking systems. PayPal also has prepaid MasterCards, which can be bought online and reloaded at various retail locations across the U.S., as well as through direct deposit and bank transfers. Meanwhile, Visa and MasterCard also have digital wallets called V.me and MasterPass, but these, too, are also focused more on online shopping, not point-of-sale checkout.

Further details on how the new Serve platform works are available here on American Express’s website.