Has Google done enough annoying stuff to drive users elsewhere in search of other, less privacy-trampling search engines? Security focused rival DuckDuckGo apparently got a post-Snowden bump, as some users switched to punish Google for participation in the NSA’s Prism data collection program. So there would seem to be a degree of scope for user churn away from search category leaders. Perhaps more scope for alternative search engines than in a long time.

Add to that, privacy-trampling isn’t the only complaint people have about Google either. Its penchant for self-focused spam by seeding organic search results with its own vertical services has drawn ire in Europe. The European Commission is currently undertaking an antitrust probe to consider whether Google’s search results are biased — i.e. by the company injecting its own content at the top of results, and pushing down rivals’. ‘Don’t be evil’ never looked so sardonic.

It’s Mountain View’s penchant for larding search results with increasing amounts of spam (its own, and paying advertisers’) that Hong Kong based startup Verbase — which currently bills itself as “a search engine with clean and pure results” — reckons gives it a chance to inch into a market so sewn up by Google that few would bother to even try.

Antoine Sorel Neron, founder and CEO of Verbase, cites a 2012 Pew study that suggests nine percent of search engine users aren’t always finding what they’re looking for when they go a-hunting data on the Internet. Of course, that still leaves a massive majority — 91% — who are getting the info they seek from Google et al so presumably aren’t crying out for alternatives.

Indeed, the same Pew report goes on to note:

Verbase is clearly not afraid of a daunting challenge, then. That said, Neron stresses his search engine is not actually trying to compete directly with Google. Because, well, that doesn’t make a lot of business sense when so many users (apparently) remain satisfied with Google. But he does believe there is a niche to be carved out for a different approach to search — to try to serve that fractional minority who purportedly aren’t finding what they’re after with the current search tools.

“With Google, you might see a whole page of ads before you even get to any organic search results,” says Neron. “It actually makes for a biased search experience and it’s to the detriment of users.”

How exactly is Verbose different to other search engines? It’s taking a crowdsourced approach to improve the relevance and type of search results it returns. Verbase is using Yahoo’s API to provide initial search results but then adds its own special (de-biasing) sauce on top in the form of an algorithm designed to filter out spam. Plus, it’s also factoring in its own users’ interactions to rate search results and (hopefully) improve relevance. This crowdsourced element should improve over time, says Neron.

“We don’t need to be as big or as publicly held as Google,” he adds, pointing out that crowd-powered vertical search engines are already successful for products such as YouTube, Google Maps and Waze (albeit, all those products are now owned by Mountain View). 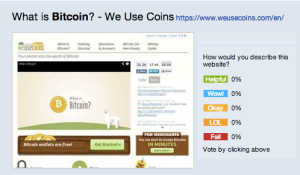 Verbase users can directly rate search results, by clicking on the Verbox button next to a result and making their vote on its relevance/usefulness (choosing from a word list, which also displays other users’ preferences as percentages as an additional crowdpowered guide).

The search engine also lets users filter search manually by selecting categories after they search to help narrow down results — which helps feed more human-powered relevance data into Verbase’s own database, so it can keep improving.

Users can also create content for particular search queries themselves (via the Bases tab), and sign up to live online chat events that could be attached to search queries (as another way to locate sought-after info).

The basic idea for the crowdsourced element is to supplement algorithmic search with human-centric content creation and discovery, says Neron. “We provide more than one way to find what you’re looking for — allowing you to engage with information that’s not just a page of links,” he tells TechCrunch.

However, Verbase is by no means the first to think of crowdsourcing as a mean to improve search algorithms. One high profile earlier attempt that springs to mind — the Wikia Search project (backed by Jimmy Wales) — deadpooled in 2009, after just over a year trying and failing to make it stick. Bottom line: you need an awful lot of users to make crowd-powered search fly.

So, unsurprisingly, the Bases and Chatbases aspects of Verbase look very threadbare indeed at this early stage in its development. Verbase launched in beta at the start of this year.

Discussing usage, Neron says it fielded some 50,000 unique searches last month. With spam and adverts to be kept out of results in the short term, he’s hoping it can keep pushing that figure up to reach a point where it can start to generate useful crowd-powered results, and give its users some genuinely relevant social search results (rather than just a few Google+ pages, a la Google).

Neron notes that Google’s marketshare of the search engine space has been flat for a few years. And then of course there’s PRISM- and privacy-gate to perhaps make people think about alternatives. Not that Verbase is billing itself as a privacy-focused search engine, like DuckDuckGo. Rather it’s playing the anti-spam, anti-advertising card for now, while it waits to see if it can accrue enough users to build its Mechanical Turk, crowd-powered engines.

Verbase’s business model will require ads to be incorporated into results in future — Neron is up front about that. But, in the meantime, its users get to enjoy an ad-free search life. And when adverts do come to Verbase they will be kept entirely separate from search results, says Neron, likely sectioned off to the right-hand side in a separate pane, rather than being allowed to contaminate the main feed.

Answering the charge that it’s a hopeless task to wade into a pool that already contains such a vast, well-resourced competitor, Neron is upbeat. “A search engine is a very viable effort if it’s made in the right way because this market is so big,” he says, adding: “It’s a huge market opportunity. All of the major competition are putting ads at the top of results.”

Albeit, he needs to be upbeat, having put in around $120,000 of his own money to fund Verbase since development work started, back in 2011. If the fledgling search startup can keep attracting users, he says it will likely look to raise external funding next year.

To hammer home Neron’s point about ‘spam free’, here’s the results Verbase returned when I searched for the following query: ‘what is Bitcoin’: 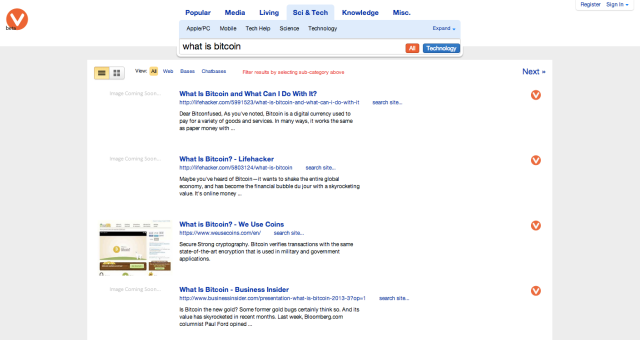 And here are the results I could see on my laptop screen (i.e. as above, without scrolling down to see more results) when performing the same search query on Google: 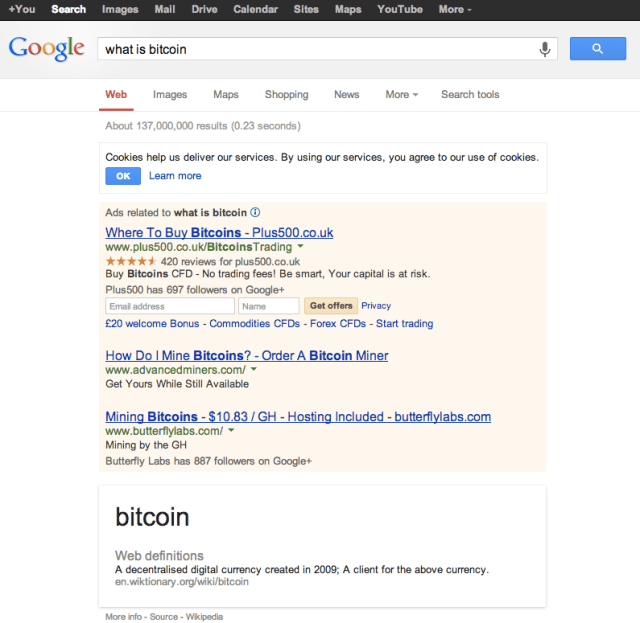 The question is whether enough people notice such a strong smell of spam issuing from Mountain View that they go seeking alternative search tools. Verbase will certainly be hoping that a disgruntled nine percent end up knocking on its door.