Research by U.K. telecoms regulator Ofcom has found that tablet usage among children is on the rise, with growing numbers of younger kids, especially, turning to tablets to watch videos, play games and access the Internet.

The annual report into children’s media consumption habits also records a drop in the overall number of children between the ages of 5 and 15 who own a mobile phone, with the percentage falling from 49% last year to 43% in 2013. It’s the first such drop since the survey began, back in 2005.

Ofcom says this decline is mainly down to a steep fall in the proportion of younger kids (8-11) owning a basic mobile phone (as opposed to a smartphone). Basic phone ownership among the latter age-group stood at 28% last year and has fallen steeply to 15% this year. Bottom line: you can’t even flog feature phones to tweens.

But, while basic phones are being ditched by kids, tablets usage is rising across the board. Among the younger kids’ age group, 18% own a smartphone, and the same proportion own a tablet. However the report notes that while the smartphone figure is “largely stable” year-on-year, tablet ownership has grown four-fold since last year, when it stood at just 4%.

As you might expect, smartphone ownership is much higher among older children (12-15) than 8-11s, with the older group being likely to be more interested in using connected devices to communicate, rather than primarily looking for a gadget to watch audio-visual content and play games (likely why tablets, well suited to the entertainment use-case, are doing so well with younger kids category). But even among the older group, the report found that tablet usage is on the rise.

The majority (62%) of 12-15-year-olds own a smartphone, according to the research — a proportion that Ofcom said is unchanged since last year — vs just over a quarter (26%) who own a tablet computer. The latter figure is up considerably on last year when just 7% said they had a slate.

Ofcom said the use of tablets has tripled among 5-15s since 2012, rising from 14% to 42% over that period. While just over a quarter (28%) of infants aged 3-4 now use a tablet computer at home (albeit, this age group is likely using a tablet owned by their parents).

“Tablet computers are growing fast in popularity, becoming a must-have device for children of all ages,” it adds.

As tablet usage grows, more traditional devices are inevitably being used less to go online. The report found that the proportion of children mainly using a laptop, netbook or desktop computer to access the Internet has fallen to 68% — down from 85% in 2012. While twice as many children as last year are mainly using other devices to go online, with tablets (13%) and mobiles (11%) the most popular device choices.

As the number of Internet-connected devices continues to proliferate, it’s also no surprise that the traditional TV set is becoming less of a focal point for kids’ entertainment too. Compared to last year, the report found that children are more likely to watch programmes on devices other than a TV, such as a laptop, tablet or mobile phone. Nearly half (45%) of children aged 5-15 are doing so, up from 34% last year, it notes.

Interestingly, the research flags up an apparent change in social media habits among kids. For the first time, fewer children have online social media profiles, with 12-15s much less likely to say they have a profile on any device (68% this year, down from 81% last). 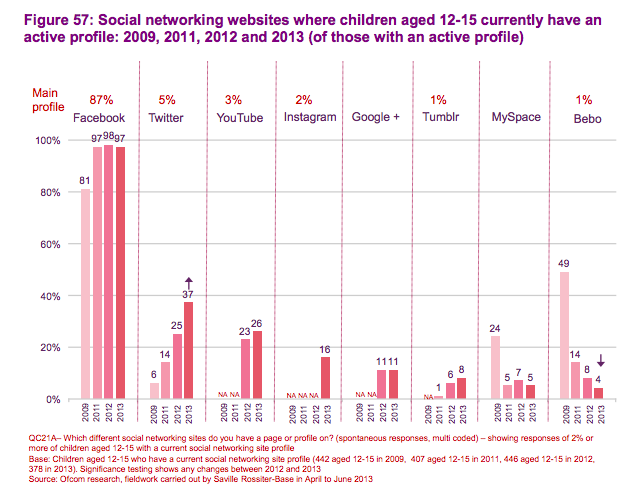 Kids with smartphones send an estimated 184 instant messages in a typical week, according to Ofcom’s data. One bright spot for carriers: traditional text messaging (SMS) remains a highly popular way of communicating for youngsters, especially those aged 12-15. These teenagers send on average 255 SMSes per week, up from 193 last year.

What are younger kids generally using the Internet for? Schoolwork is the most mentioned activity carried out at least weekly by 8-11s (75%), followed by games (54%) and finding information (45%), according to Ofcom’s data.

Weekly use of the Internet for telephone or video calls is also on the rise among children vs. last year’s research (now at 10%, up from 5%), as is going to photo-sharing websites (at 5%, up from 2%).