A company tapping into the power of a distributed mobile workforce is Quri, a retailer analytics and intelligence company whose software has been adopted by half of the top twenty-five CPG (consumer packaged goods) brands around the world, including Tyson, Nestle, Dannon, Procter & Gamble, Unilever and others. And it’s only been on the market for 15 months. Today, the company is announcing an injection of capital to fund its growth, with $10 million in Series B funding in a round led by Dana Stalder of Matrix Partners, who will now join Quri’s board.

Quri is operating within an enterprise-focused vertical in a broader space where a number of mobile task-orientated marketplaces are now emerging. Consumer-facing startups like TaskRabbit or Postmates let users farm out their to-do’s and deliveries, for example. Like Quri, these companies are also taking advantage of a similar trend involving workers who can be assigned jobs on demand through their mobile phones. Gigwalk, a more direct competitor, also taps into mobile workers who are willing to be the eyes and ears for businesses in need of temporary on-the-ground staff, like people to photograph retail displays, restaurant menus, or even real estate listings.

But San Francisco-based Quri has been more narrowly focused on the CPG space since its founding in late 2010, and subsequent general availability last summer. Instead of trying to build a more generalized task marketplace, it’s been developing specific templates and workflows that make sense for CPG brands and their retailers. 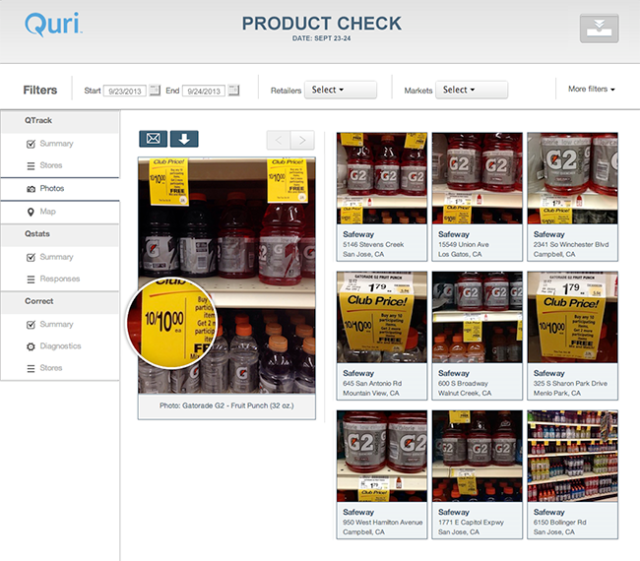 Before Quri, brands needing to spot check their promotions, displays, and other inventory issues would have to manage the process through old-school methods, or they could pull point-of-sale data which would let them know after the fact if things were priced incorrectly. According to studies the company itself ran, human errors and other mistakes are fairly common in the industry – 22% of the time the brand’s promotional pricing is not being displayed, and 49% of the time, its merchandising displays are simply MIA.

Today, Quri works with over 25 manufacturers to address issues like these, which can have a significant impact –  in terms of billions of dollars – on their sales. To do so, Quri utilizes a mobile workforce via a consumer-facing iPhone app called EasyShift to distribute its assignments. CEO Justin Behar declined to provide the number of mobile workers who use Quri regularly, but said the app allows the company to now cover 99% of retailers’ presence in stores – a metric that has grown from 40% a year ago. That’s tens of thousands of stores, he says, noting also that 75%-80% of data is collected by Quri’s workforce within 48 hours.

The workers range from those picking up the occasional side job earning around $100 per month to those who regularly take on tasks, often alongside other crowdsourced work like TaskRabbit tasks, earning them $500-$1,000 per month. Among the most active Quri workers, churn rates (turnover) are less than 10% per year, says Behar. 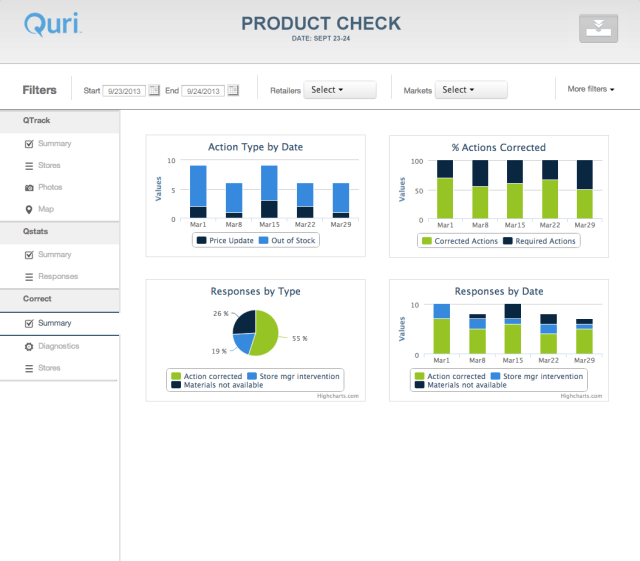 Quri’s system, meanwhile, checks the accuracy and quality of that data, before passing on to its customers. The brands then access those insights in an online dashboard, where they can drill down into store-level problems in order to start taking steps to correct the issue at hand, as well as view analytics across their data set as well as view broader trends across the industry related to retailer or store issues, stock levels, merchandising displays, promotional pricing matters, and more.

When problems are found – for example, an item on sale is not being advertised with the discounted price, or an end cap display is missing – the company would have then to take the next step to reach out and contact their own field workforce, which may be in-house staff or third-party merchandising teams.

Quri is making that process smoother going forward with the launch of “Quri Agile,” a real-time alerting system that will contact the appropriate person via email messages as soon as the issues are flagged. Recipients then have to respond to the issue, noting it has been corrected, or what the problem may be that’s preventing that from occurring. This feature is bundled into the main product offering, sold at enterprise price points which tend to be six to seven figures for annual contracts. 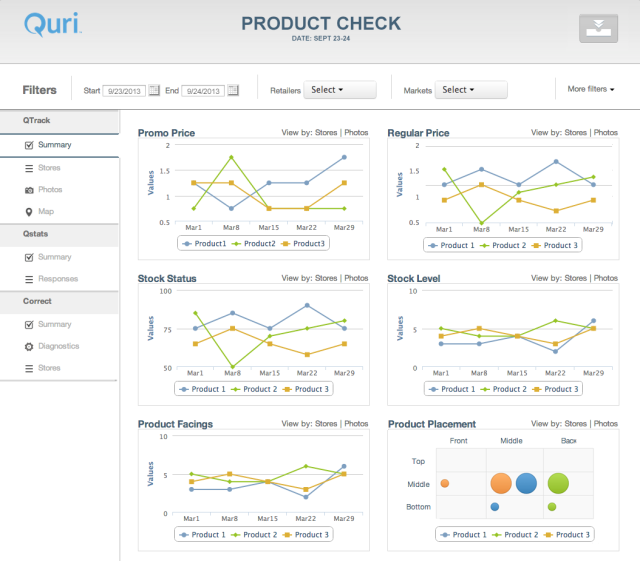 While Behar isn’t speaking about company revenue in detail, due to Quri’s age, he would say that revenue has grown quarter over quarter, and the company is tracking to 1,000% growth this year over last. Going forward, the plan is to grow the team, scale, and work toward profitability.

“We’ve been very interested in mobile crowdsourcing as a category,” says Stalder, about Matrix’s investment. “We’re very active investors in enterprise SaaS as well as in big data, and what’s really interesting about Quri is this is a company that’s at the intersection of all three.” The category Quri is going after has a $600 billion of spend across manufacturers, CPG companies and retailers, Stalder also notes. He says that Matrix has been watching Quri, and has been impressed with the team’s execution, and how quickly they’ve grown their customer base as well as their contracts – going from tens of thousands to hundreds of thousands of dollars in short time.

With the additional funding, Behar says Quri will grow its now 27-person team, potentially doubling it or more by a year from now, with added engineers, designers, product managers, and customer-facing roles. Quri will also be working on product development, integrating with other third-party platforms, expanding its analytics, and bringing those analytics to mobile devices, too. An Android version of the consumer app is also in the works.

Quri’s larger goal goes beyond getting the day-to-day problems fixed – it’s about tapping into its data to address broader industry problems.

“You start by fixing that with one problem on one shelf,” says Behar. “But the long term value comes from trying to figure out the problems that are happening systemically and help them correct them consistently over time to help improve performance and drive sales.”