Exec says that it’s dropping prices for its home cleaning service in all nine markets by 25 percent.

Founder and CEO Justin Kan told me that customers will still get a fixed quote for the entire cleaning, but the change effectively lowers Exec’s prices to $22 per hour per cleaner. (Among other things, that makes Exec more competitive with the Homejoy, which charges $20 an hour.) He also said that gross bookings for the service have been growing by an average of 28 percent per month for the past four months.

“After surveying users and getting feedback for the past couple months, one of the biggest pieces of feedback we’ve gotten was that we could be providing more value, and our customers would use us more if we were priced lower,” Kan told me via email.

Kan added that Exec can lower its prices significantly because it’s eliminating “our deeper cleaning options” (such as cleaning walls) from the basic service, and then charging for them on an a la carte basis. 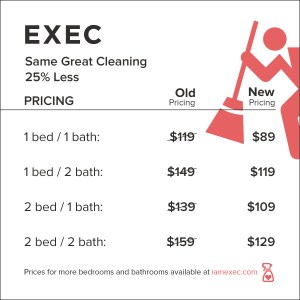 Exec actually launched as a more general on-demand errand service, but over time, its focus has shifted to cleaning, and it announced plans to shut down the errand service last month. At that point, cleaning already accounted for 95 percent of the hours worked at Exec, Kan said.

“We decided that it was for the best to focus on what was working, even though I personally loved using errands,” he added. “Like the decision to focus Justin.tv [which Kan founded] on Twitch, which seemed like a niche at the time, but eventually grew much bigger than the horizontal platform, I think this will look like a smart decision over time.”

(By the way, Exec’s investors include CrunchFund — which, like TechCrunch, was founded by Michael Arrington.)