A new app for iPad called Lineal Timeline launched recently, offering a way to scroll back through historical events from centuries prior, as well as create your own personal timelines using notes and photos from your device’s library. Though appearing deceptively simple, the app’s goal is fairly ambitious: it wants to be able to present all of history in minute-by-minute detail in the iPad’s interface, without overwhelming the user with information.

The answer comes in the form of an iOS 7-only iPad application from a company called Apposite, founded in 2011 by husband and wife team Greg Wieber and Colleen Clery. Greg had previously launched music app Polychord in the iTunes App Store, before the two teamed up on Apposite. The company’s first creation was Microcosm – an experimental sound toy that grabbed a headline on Gizmodo in early 2012.

Lineal Timeline, however, has been on Colleen’s mind for years. She began working on designs for the app back in 2010, after being inspired by the iPad’s capability to organize research and thoughts. Explains Greg, Colleen is dyslexic and has been frustrated by how information is often presented in isolation. “For her, understanding comes through placing things in context – by contrasting fields of study, building connections between them, and discovering common themes,” he says.

Meanwhile, Greg, a former EA interaction designer, says he was intrigued by the user interface challenge of building something like Lineal Timeline. 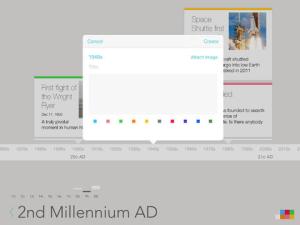 Even if you don’t have a need for organizing your own personal research into some sort of historical context, Lineal Timeline is still an enjoyable way to organize any series of events throughout history that you want to better understand and view more visually. For example, a student struggling to understand how the events of a World War unfolded could plug them into the app and then use it as a reference tool. You could also visualize the important moments throughout a company’s history, or that of an industry. Parents could use Lineal Timeline as a modern-day baby book, tracking the chronology of their child’s first steps and other milestones.

The app also supports “future” timelines, which opens it up to other use cases led by project managers or event planners, too.

Today, Greg says he’s been using Lineal while reading about Einstein — plotting his major life events and discoveries, including those of his contemporaries and predecessors all the way back to Newton.

As you create your own timelines in Lineal, you’ll be able to scroll through the moments you add in a variety of ways. If you were to build a timeline for a series of events throughout a decade, for example, when you zoom out, all the events from that decade form a stack which can be scrolled up and down for easy access. Zoom in again, and the events again spread out to their respective years. You can also color tag events to build sub-timelines around themes, and a forthcoming update will make building timelines easier through the addition of import and export tools. That will go a long way to encourage adoption, as today making timelines takes, well, some time.

A bit further down the line, the plan is to also add in collaboration and sharing features. And longer-term, Greg says the company’s overall vision for this and other projects it’s considering, including some smaller apps that emerged while making Lineal, is to bring data visualization tools to ordinary people.

He declined to discuss the business model in-depth (beyond the fact that Lineal is a paid application), saying only that there are “a lot of interesting opportunities once we reach a certain scale.” Well, aren’t there always? However, he did promise Lineal would never introduce things like banner advertising in order to generate additional revenue.