Editor’s note: Peter Relan was VP of the Internet Division at Oracle, founding head of technology at Webvan from 1998 to 2000, and founder of the YouWeb Incubator program in 2006 and the recently launched 9+ accelerator program. Follow him on Twitter @prelan.

Webvan is well-known as the poster child of the dot-com “excess” bubble that led to the tech market crash in 2000. Business schools around the nation study Webvan’s overly ambitious rush to the biggest IPO to date in Silicon Valley, as a prime example of what to avoid doing while scaling. Ironically I recall guest teaching the first case study on Webvan at Stanford, the day before the market crash in 2000. While it’s true that the impatience to go public helped steer Webvan off a cliff, the once darling company made two other critical, but often overlooked mistakes.

Are those mistakes being repeated a dozen years later in the slew of activity — even excitement — in the home-delivery space? If not, why? Is it simply a matter of investors needing a decade to reconsider home-delivery plays? Or is there more to it? Are today’s home delivery specialists realizing that they can avoid these mistakes to slowly but surely conquer an untapped market?

Webvan’s go-to market strategy in each city was: the quality and selection of Whole Foods, the pricing of Safeway, and the convenience of home delivery. In other words, it was a mass-market strategy (unlike Whole Foods which is an upmarket strategy). The target audience therefore was not selected to be “price insensitive.” If you advertise yourself at Safeway pricing, you will attract a price-sensitive audience. Whereas those who go to Whole Foods are more price-insensitive: They believe they are getting a higher quality of selection and product, so price matters less.

The customers who would have made Webvan profitable were those who said, “Wow, I can get quality selection and products delivered to my home: heck I’ll pay anything for that.” Yes, that’s a smaller audience than a mass-market audience, but after all, even smartphones started out as a tool for stockbrokers and corporate executives before becoming mass-market devices. Webvan should have priced at least 30 to 40 percent higher and ignored the customers who didn’t want to pay those prices. A company must be clear on what it is providing and price for it – Webvan was providing a luxury; an ability to order sushi and organic fruits directly to the home, and thus it shouldn’t have tried to compete with Safeway’s prices.

Webvan decided to build its infrastructure from scratch. I was responsible for the hundreds of engineers who built the software algorithms to make five miles of conveyor belts in our Oakland Distribution Center (DC) transport 10,000 totes around the DC daily. After conveying the item to automated carousel pods, 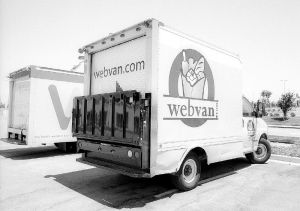 which would spin like juke boxes to transfer the item in question into the tote, the entire process would rinse and repeat until the order was completed and integrated at the shipping dock. Additional real-time inventory management algorithms would make sure that if a customer ordered milk on the website, it was currently in stock; software algorithms would route delivery vans to multiple delivery stops while minimizing drive time; and software on Palm Pilots in drivers’ hands would deal with real-time delivery confirmation or returns.

Combining mistakes Nos. 1 and 2 was a dangerous cocktail of the lower margins of mass-market pricing, and colossal capital expenditure associated with complex infrastructure. This cocktail, combined with mistake No. 3, pushed Webvan over the edge.

Mistake No. 3: Too Much Money, Expanded Too Fast

This is the more well-known and final mistake. Most people view Webvan’s capital raise of $800 million as excessive and ill-spent. The pressure to “grow big fast” in those days blotted out all other considerations. This desire for massive, immediate growth was so intense that we started launching in new cities on the thesis that the unit economics of home grocery delivery would be profitable. Our DCs and vans rolled out in the Bay Area, Seattle, Chicago, Atlanta, and each city’s capital requirement was well over $50 million just to start. We touted our 26-city expansion plan, signing a $1 billion Bechtel contract to build several state-of-the-art warehouses worth more than $30 million each.

Today the most popular acronym in the valley is MVP (Minimum Viable Product). In the dot-com era it was GBF, or Get Big Fast. The problem was the Bay Area model was taking a long time to iron out, and in the meantime, all our cities were burning through the cash. Our entire strategy depended upon the reassurance that the Bay Area model would inevitably become successful. Maybe it would have eventually succeeded, but we would never find out: With the market crash of 2000, capital dried up and the company was starved into a forced asset sale to Kaiser Permanente in 2001. The infrastructure in Oakland, as well as the software systems, were bought by Kaiser in order to deliver drugs and supplies to its hospitals.

Instacart and Postmates are both avoiding the infrastructure model mistakes. They are leveraging the existing infrastructure of grocery stores, not building their own infrastructure. They focus on two areas, delivery and customer service, and concentrate their resources on excelling in those departments. Good start: Mistake No. 2 avoided.

Instacart prices its items very cleverly. Rather than charging a delivery fee, they simply “mark up” the prices on the items so the “real” prices are not visible. In a certain sense they are following the target audience and pricing mantra I think Webvan should have used: They are focused on convenience-oriented customers who will ignore the mark-ups. Those who follow and remember the hundreds of prices of grocery items are not likely to be their target audience. Plus they charge a small delivery fee of $3.99, which in itself is not enough to pay for the unit economics, but along with the price mark-ups it probably works. And they have an Instacart Express model like Amazon Prime, which makes sure that if you order enough and subscribe for $99/year, delivery is free. Sir Michael Moritz of Sequoia was on the board of directors of Webvan, so he knows the math well and is an excellent adviser to Instacart.

From what I can tell, Postmates doesn’t directly mark up prices, but it recognizes that delivery economics is very central to overall unit economics. So they charge a delivery fee based on their proprietary algorithm for determining how “expensive” your delivery will be. It’s a classic “service platform” model, like AWS almost, where they build in a margin per delivery requested. That way they won’t lose money on orders overall, even though any particular order may not be profitable.

Instacart and Postmates have studied the history of home delivery. They are avoiding mistake Nos. 1 and 2 that Webvan made. Now only two questions remain. How profitable will their models be? And how quickly will they expand nationally. Stated otherwise, will they avoid mistake No. 3? Time will tell. I would love to hear your opinions.