eBay has acquired online marketplace for men’s shopping Bureau of Trade, the company announced today. Founder Michael Phillips Moskowitz is joining the eBay Marketplaces team, where his focus will be on helping eBay improve its personalization efforts. Terms of the deal were not disclosed, but it was an all-cash deal and an “acceptable” and positive (if not stellar), outcome for Bureau of Trade’s investors.

The startup had raised $1.2 million in seed funding in a round led by Foundation Capital, with contributions from Founder Collective, FF Angel, Courtney Holt on behalf of the Techfellows Fund, and other angel investors.

The deal speaks to eBay’s increasing efforts to modernize its website by experimenting with new kinds of shopping experiences. The first results of Moskowitz’s work at eBay will be seen as early as this fall, we’re told.

Though Moskowitz declined to discuss Bureau of Trade’s sales or user numbers, he said that the company’s blending of content meets commerce had proven to drive up the sales price for items on the site. “The average good on eBay will sell at X purchase price. That same piece of merchandise when covered by the Bureau – when written about by us – created in many instances a 50 to 100 percent price increase. That’s profoundly valuable,” he says.

He hints that there’s something interesting in the works with what he’s learned through Bureau of Trade that’s now coming to eBay, but couldn’t provide details. Bureau of Trade remains online for now, and will have some sort of “big surprise in store this fall” with regards to its future. Sometime in either November or December, the site will introduce “something you’ve never seen before,” Moskowitz teased. (TechCrunch has seen quite a lot, actually, but he swears it will be new.) In fact, Moskowitz says he can’t even tell us his title at eBay, because it’s a role that has never before existed and would give away too much.

eBay, he notes, now has his startup Bureau of Trade, plus other acquisitions like Svpply and Hunch, which he describes as a “triumvirate that’s uniquely positioned to do something catalytic and game-changing later this fall. We’re all working together symbiotically,” he says.

As you may recall, eBay had first announced a Pinterest-inspired redesign last October, which featured an image grid and improvements to site search. That revamped homepage was then rolled out to all U.S. customers in February, with eBay touting the more individualized feel it offered consumers, with product feeds that included items, brands and trends that matched users’ own interests and passions.

Moskowitz’s previous experience before Bureau of Trade includes time at Palo Alto design firm IDEO and as co-founder of menswear label Gytha Mander. Going forward, he will remain in New York, where, says eBay, he will “be helping eBay’s 120 million active users (as of June 30, 2013) discover items that match their individual tastes and preferences.” Five members of the 10-person Bureau of Trade team will also join eBay. 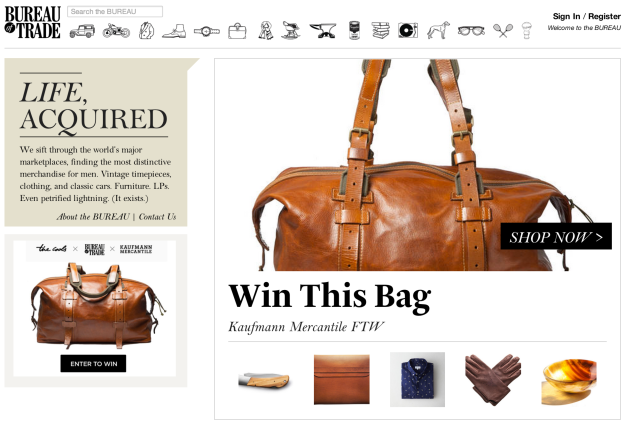 For background, Bureau of Trade launched last September – about the same time eBay launched its new homepage. The startup was an experiment in wrapping together content and commerce to see if doing so would boost sales. According to investor Charles Moldow of Foundation Capital, whose firm led roughly 90 percent of the startup’s $1.2 million seed round, that thesis was proven correct: content absolutely helped drive sales and at higher prices. Whether or not that could scale, however, would have taken more time and investment. At the time of the acquisition, the company was trying to grow its audience, which was in the six figures.

Moldow said that Bureau of Trade’s unique position – one that he said somewhat reminded him of the J. Peterman catalog parodied on Seinfeld – was why his firm even took the risk on Moskowitz’s content/e-commerce business. It wasn’t really an e-commerce company, he said. E-commerce businesses have high acquisition costs, low product margins and high churn. “That type of business would not interest us, but this was a social company, a content company, and a media business – it had a commerce element for monetization,” he explained.

Moldow facilitated the introduction between Moskowitz and eBay after meeting with Devin Wenig, eBay’s President of Marketplaces. Wenig was already aware of and liked what Bureau of Trade was doing, probably because a majority of the merchandise the startup listed on its site was sourced from eBay sellers.

We reached out to eBay to find out more about their plans with Moskowitz, but the company has so far declined to provide much beyond what they’ve already said publicly. All eBay would say for now is that later this fall, it will be rolling out additional updates and new features to the eBay homepage, which will involve some of Bureau of Trade’s learnings.

“Michael and his team are playing a pivotal role in this next phase, working closely with our product team to ensure these changes offer the optimal shopping experience combined with an editorial viewpoint for our global community. Stay tuned,” an eBay spokesperson told us.

Bureau of Trade’s website remains online, and does not include a mention of a forthcoming closure, acquisition or transition plan. Moskowitz says he didn’t realize eBay was making the announcement today. But when the time comes to announce Bureau of Trade’s next steps, it will be broadcast on YouTube, on Esquire.com, and on the Bureau website itself.