Rent the Runway, the site that has been leasing designer dresses to women at a fraction of retail price since 2009, is launching its first mobile app today. With the understanding that their target customer is an on-the-go kind of woman and that usage is increasingly taking place on phones, a newly redesigned mobile site will follow next week.

“People aren’t necessarily renting because they want a designer dress,” said Rent the Runway co-founder and CEO Jennifer Hyman. “They’re renting because they’re busy, professional, and this is a seamless way to get them dressed for every occasion. We wanted to do mobile that first of all was enhancing the experience of convenience, and that you could really do on a phone.”

The app, which has a flat design created with iOS 7 in mind, has a few features to be aware of. One, called Dress Match, lets users take a photograph of a dress or color swatch they like and identifies the same dress or similar styles available to rent. Another, Shortlist, gives users the option to create thematic lists and add dresses to them for later.

With Dress Match, Rent the Runway has essentially created a showrooming app that will likely point back to their inventory as the best value more often than not. 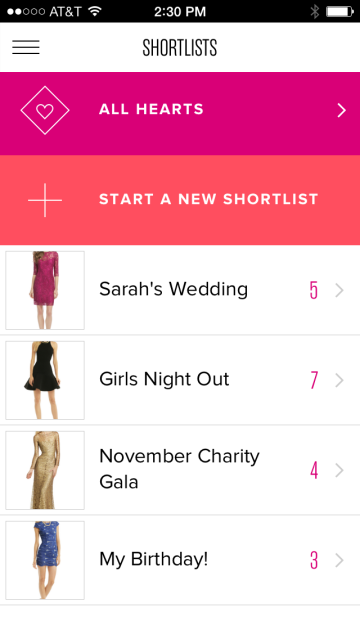 “Certainly our customers, when they’re going into stores, they have downloaded RetailMeNot and their competitor apps. They’re comparison pricing and shopping,” Hyman said. “For our customers, the #1 adjective they’d use to describe themselves is smart.”

While that’s one potential use case, Hyman pointed out that the primary Rent the Runway user is a woman who is too busy to go into stores anymore. Rent the Runway users are also highly social, she said, and the type to take a photo of a friend’s dress to find a similar style.

The app is helpful for game time (i.e. in-store) decisions about whether to drop $300 on a dress or not. It’s was also designed with boredom shopping in mind. Rent the Runway users are browsing when they’re in a cab, waiting for the subway, or watching TV at night, and they’re doing it on their phones, Hyman said. 25% of use is coming from mobile, and that’s even with a mobile site that Hyman openly said sucks.

To that end, Rent the Runway will be continuing its mobile push with the roll-out of an entirely new mobile site next week.

The new site translates the best of the app into web form, she explained. To keep customers engaged with the new mobile products, the team will be rolling out new features incrementally.

Although Hyman remained mum on the site’s forthcoming features, one of the first will be the ability to track orders. Rent the Runway customers have a particularly high investment in logistics, since their dress usually arrives the day before or day of an event. If they don’t get the dress, they might not have anything to wear, which is pretty anxiety-provoking.

Beyond that, Hyman wouldn’t share further details on the upcoming site, so we’ll be watching for that in the coming month.