Twitter is rolling out a new system called Twitter Alerts today that lets you choose to receive special alerts from emergency accounts, government organizations and NGOs. The system is designed to expand on Twitter’s ‘Lifeline’ service which was offered to those in Japan suffering from the earthquake last year.

That service connected users to emergency twitter accounts during the earthquake, and Twitter says that it’s now expanding this kind of emergency function out to the rest of the world. Twitter says that this will help users to get “important and accurate information from credible organizations during emergencies, natural disasters or moments when other communications services aren’t accessible.” 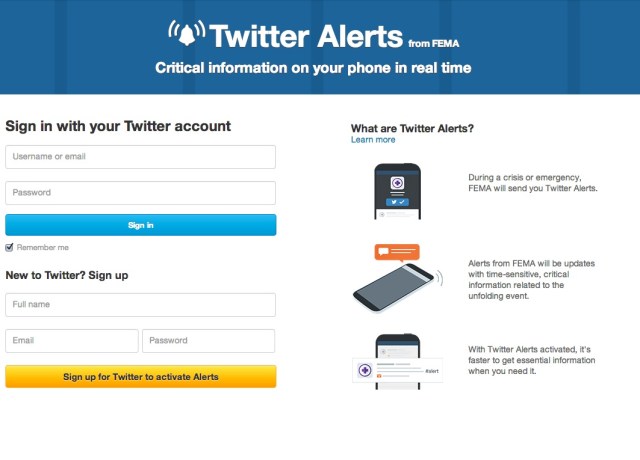 The system is available now, and a few organizations are already participating in the U.S., Japan and Korea. But anyone anywhere can receive the alerts. Some of the US agencies include the American Red Cross, Centers for Disease Control and Prevention, Federal Emergency Management Agency  and the US Geological Survey.

The move is an interesting one from Twitter, and fits in with the general uses that people are already putting it to during emergencies and natural disasters. The US Department of Homeland Security has already recommended networks like Twitter and Facebook over phone lines in order to keep those clear for emergency workers. Building out the uses of Twitter as an emergency channel is as safe, publicity friendly and clear a bet as you can imagine. It’s not part of Twitter’s TV or social agenda, but it dovetails nicely with its standing as a secondary communication channel. Establishing Twitter as an indispensable communication channel and emergency alert system couldn’t hurt when it makes its pitch to shareholders.

To subscribe to alerts, you can visit the alert page of an organization at Twitter.com/[account]/alerts/. If you want to see if an organization is enrolled, check their profile page to see the alerts badge along the left hand side. A link there will let you sign up.