Too busy to handle selling your stuff on eBay or Craigslist, or having a yard sale? Yep, same here. That’s why a startup called Sold, launched earlier this year, had me intrigued. Its big idea is to take the whole e-commerce process out of your hands by pricing your items for you, finding a buyer, sending you packaging, handling shipping, completing the transaction, and then getting you paid. Today, Sold is launching on Android, following its iOS debut back in April.

The company was founded by Matthew Blackshaw, Tony DeVincenzi and Dávid Lakatos, who believed that a better way to add value in e-commerce marketplaces is not to try to reinvent or topple Craigslist or other established sites – something many startups, including Zaarly, YardSellr, and EggDrop, have tried and failed to do. Instead, they realized that a new approach focused on simplifying the way we sell online could be an unexplored niche still ripe for change. 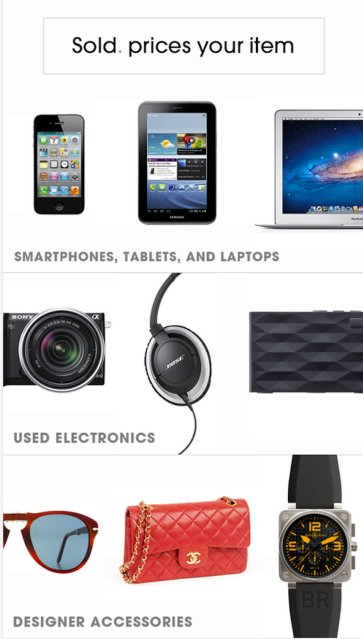 Today, Sold says it has more than 2,000 unique products in its marketplace, and saw 50 percent growth in items posted last month. Its prices are on average 43 percent higher than Gazelle’s, which it attributes to its pricing engine technology. The company uses algorithms and scrapers to crawl top e-commerce marketplaces, like Craigslist, eBay, and Amazon product search to build its pricing database, allowing it to know the “going rates” for your items, and where those items are selling for more.

To date, the highest priced item it has sold so far was an $8,000 watch, but the average purchase price of items falls around $262 – two times greater than eBay’s, the company points out. However, that’s because currently, Sold is focused on users selling electronics (computers, phones, tablets, etc.) and other accessories (handbags, sunglasses, watches and shoes). Though, technically, it could sell anything (legal) that fits into its largest box size (16″ x 16″ x 12″).

While there aren’t additional fees or surprise charges, as TechCrunch previously noted, its pricing includes the service charge for the marketplace it sells your item on, as well as its own bundled-in fee and margin. But this is all presented to the seller as one price, which they can choose to accept or reject upfront before making the sale.

Co-founder DeVincenzi tells us that Sold is now projecting $1 million in annual revenue as of its first 90 days and is still growing.

With the debut on Android, the service has sped up to be twice as fast as before, going from post to payment in as little as four days on some occasions, and even sees popular items sold within an hour. It’s now also accepting items with a market value of $50 and up.

The new Android version of Sold is available for download here on Google Play.