Apple has finally take steps to better cater to the children who have adopted its devices, and especially family favorite the iPad, with the launch of a Kids App Store. Arriving this week alongside the launch of iOS 7, the Kids App Store store is not a separate mobile application, to be clear, but is rather a new section within the Apple App Store itself, which now features an added “Kids” category where apps are broken down by age range.

This section of the store separates the apps into three age ranges, spanning those 5 and under, those between 6 and 8, and finally, those for kids between 9 and 11.

The company first revealed this “Kids” section at its Worldwide Developers Conference earlier this summer when the revamped iOS 7 mobile operating system was first revealed.  The updated mobile App Store app also saw a number of other changes, including the removal of “Genius” from the bottom menu in favor of apps “Near Me” for example, support for automatic app updates, and more. 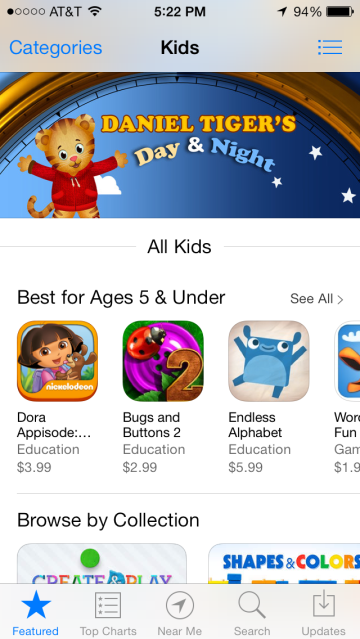 In addition to better organizing the mobile apps targeting children for ease-of-use, the Kids App Store also comes at a time when Apple has begun to allow children under 13 to sign up for and hold iTunes user accounts, as long as they’re funneled through an “approved educational institution.” As TechCrunch previously noted, Apple will face a lot more scrutiny now that it’s making mobile apps available directly to younger children.

A SAFER HOME FOR KIDS APPS

Apps aimed at the under-13 set, for example, will need to follow the Children’s Online Privacy Protection Act (COPPA) requirements. These state that developers can’t ask for personal info from kids, expect for “the purpose of complying with applicable children’s privacy statues” – that is, not in order to gather information for targeting ads. The apps can’t transmit or share personal information without parental consent, either.

And in addition to now being required to have clear privacy policies, apps in this section can’t use ads that ask kids to complete some sort of in-app activity and have to ask for parents’ permissions before they link outside the app to the web or other software, for the purpose of commerce. That’s right: no more spammy pop-ups, or tricks and nags to get kids to buy…at least not in this section.

For many reputable kids’ app developers, compliance with the new policies was not a serious issue. “The changes were minor,” says Mindshapes Joint CEO Chris Michaels, whose company has three applications in the Kids category upon launch. “We have included a privacy policy within the app, per Apple’s requirements. We had already implemented other features for compliance, notably parent gating on any transactional or outbound link-based content, earlier in 2013,” he said.

Toca Boca’s CEO Björn Jeffery added that while many kids app developers, like his company, had complied with most of Apple’s rules much earlier, “a few of the more shady developers probably had no intention of even trying to comply.” And as word gets out that the “safe” apps for children are found in the Kids section of iTunes, those still trying to monetize via children’s in-app actions and purchases may see their businesses affected negatively.

“Apple is clearly doing the right things and trying to stamp out some of the abuse that has happened in this sector with unscrupulous app developers tricking kids into making in-app purchases,” said Gregg Spiridellis, co-founder at StoryBots, noting also that his company only had to make minor tweaks to become compliant with the new policies.

In the case of a large publisher, like Disney, its apps were already COPPA-compliant as of this summer, and it added an “age gate” for anything related to in-app purchasing, registering, or email capture. Basically, this is a pop-up window that features a code generator where you have to read and enter a code before you can proceed. Other apps use special actions, like a press and hold gesture, or require parents to have a separate in-app account.

Across the board, most of the well-known kids brands told us similar stories about the changes – that they involved minimal efforts on their parts, and these “new” policies are things they were doing anyway. Only now there’s more structure to the system, and they’re no longer lumped in with apps that don’t play by the rules.

In both the mobile iOS 7 App Store and updated iTunes desktop software,  the Kids section breaks out the specially vetted applications separately from the more general “Education” section, which still remains. Though there’s a lot of crossover between the two categories, the Kids section is really a curated subset of the Education section, where apps can extend beyond the early learning crowd to include those aimed also at adults and “lifelong learners.” 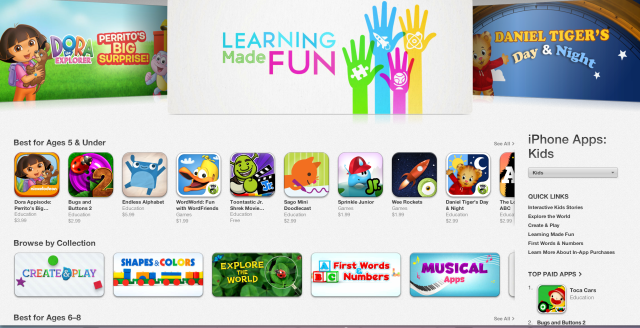 Big name kids brands are also given their own collections, like Disney, Toca Boca, Duck Duck Moose, SagoSago (a Toca Boca brand, actually), Sesame Street, PBS Kids, and others, giving them a higher profile as a kids’ app maker than in the past. While the majority of the apps have an educational bent to them, some of the games showcased are more entertainment-focused – like the ones where your child can “Facetime” Elmo or Cookie Monster, for example.

But as noted above, these apps don’t continually pester children to tap on ads or buy additional items (like those Talking character apps at Out Fit7 do). Not only are the purchases hidden away in a gated “parent’s area,” as noted above, many of the apps in this section are paid apps, indicating their increased quality.

As a parent trying out many of the featured apps over the past few days with my preschool-aged daughter, it has been smooth sailing. Instead of the continual frustration that accompanies the low-quality, advertising-filled free apps we’ve tried in the past, she’s able to just enjoy the storytelling and interactivity without being pushed and tricked into purchase behaviors she can’t yet understand.

I’ve cleared out the iPad of those older apps, and have filled it only with newly vetted ones from the Kids store. It’s a weekend project I’d recommend to any parent with a little free time this Sunday, too.

Though it’s still early days, Alan Shusterman, CEO at Duck Duck Moose, whose apps were featured by Apple in 14 collections, says he’s already seeing a positive impact on sales. Sara DeWitt, Vice President, PBS KIDS Digital, said they are too, and expect that trend to continue. And Yves Saada, Vice President, Digital Media at Disney Publishing, says that Kids category aids in discoverability, and the company is already seeing an increase in downloads.

Others, like Toca Boca, say there haven’t been major spikes yet, but over time they expect the category to continuously get a visible spot in Apple’s store, leading to more sales for developers in the long run.