For the first time ever, customers of Verizon’s FiOS TV service are being allowed to watch live television on their mobile devices when they’re out of their homes, and disconnected from their home’s Wi-Fi network. Currently, this new capability applies to just nine cable TV channels, including BBC America, BBC World News, EPIX, NFL Network (iPad-only), HGTV, DIY, the Tennis Channel and Scripps Networks Interactive channels, Food Network and Travel Channel.

The support for live TV viewing comes in the form of a newly updated iOS app, FiOS Mobile, which is now available for both iPad and iPhone as well as within newly launched Android and Kindle Fire applications.

The app first launched for iPad last November, offering customers 75 channels of live television. However, although the app didn’t require any additional software running on users computers or hardware beyond a supported HD DVR, the iPad did have to be connected to the home’s Wi-Fi network to work.

With the update, for the above select channels, that requirement is no more. In addition, the app now offers 76 total channels while in home, and has added support for local affiliates of ABC, NBC, CBS and Fox, plus Spanish-language channels such as UniMas and Univision, in New York, New Jersey, Philadelphia and Washington, D.C.

The app also includes the functionality previously found in the FiOS Mobile Remote and Verizon Media Manager apps, in order to combine all the mobile services offered under one roof. This includes on-demand content, like FiOS’s 45,000 Flex View titles (movies and other programs on demand), as well as free and paid subscription content from HBO, Cinemax, Starz, Encore, Food Network, HGTV, Travel Channel and others. 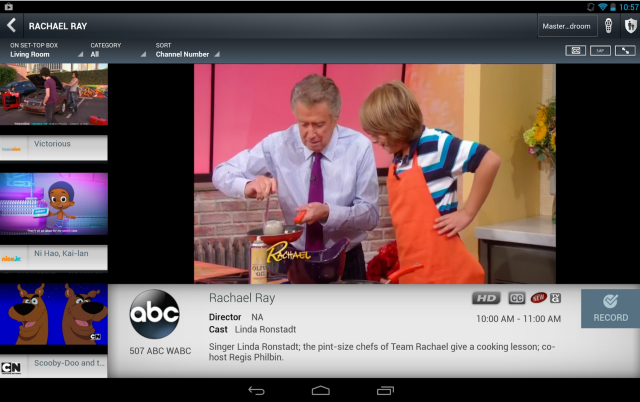 The company says additional content and local channels will be added throughout this year and 2014. And though it could not speak to the size of its mobile install base for competitive reasons,  Verizon says that it has 5 million TV customers, 5.8 million users with Internet connections, which gives you an idea of the potential market for live mobile TV outside the home.

Verizon is not the first company to bring live TV to mobile devices outside the home – if anything, it’s lagging a bit – but it is rather representative of a growing industry trend, where cable companies and networks are readjusting themselves in the face of changing consumer behaviors. Subscription services like Netflix and Amazon Prime Instant Video, have been fighting for consumer attention, and are even starting to fund their own programming – some of it quality programming enticing young generations to cut the cord. Netflix, for example, just won its first Primetime Emmy Awards for its drama “House of Cards,” following 14 nominations,

Other cable and satellite providers have already moved to offer live TV outside the home, including Time Warner Cable, which added support for streaming select channels out of home in April, including at launch 16 local news stations, and 8 networks. (It now has 12.) Comcast, DirecTV, Dish, and Cablevision also offer their own out of home lineups, of varying sizes. (Dish uses Hopper with Sling, however.)

The networks themselves have been getting in on the mobile action too, with premium channels like HBO and Cinemax offering their own apps, kids’ programming providers like PBS, Nickelodeon and Disney offering select shows and episodes, and there’s even some support for full length programming from the major networks and other cable channels within their own standalone applications.

In fact, the increasing variety of options has been fueling a new kind of mobile startup to form – one that attempts to organize all the programming options for you, then tell you what other mobile application or streaming service lets you watch these shows and movies. For instance, Luma.tv recently launched to offer a personalized programming guide, following in the footsteps of competitors like recently launched app Yidio. And these compete more broadly with apps like Peel, Televised, Fan.tv (Fanhattan), and others that want to provide mobile video and mobile TV guides.

The updated FiOS apps can be found here.