Receipt and business card digitization service Shoeboxed is now starting to do something with all the data it scans and stores online, which now includes tens of millions of receipts. The company this week launched a new initiative called “Shoeboxed Labs,” which will allow it to roll out experimental features to its core service more rapidly. The first feature is called “Price Deputy,” a price comparison service that alerts consumers to better deals after they purchase.

The opt-in service works by comparing a shopper’s receipts to others in the Shoeboxed database. Basically, Price Deputy checks the items on the receipt and the prices paid, and sees if anyone else got a better deal. If so, the consumer is alerted to this, and the service will summarize the retailer’s return and price-matching policies so they’ll also know what steps to take next — that is, whether to ask for a price match or simply return the item and shop elsewhere. 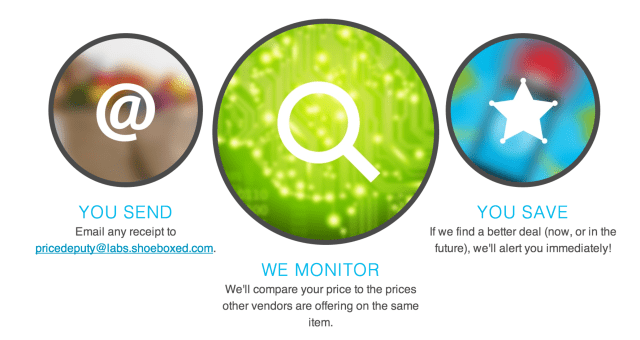 Outside of one free DIY plan, Shoeboxed itself is a largely a premium service, and plans range from $9.95/month for individuals to $99.95/month for larger organizations. However, Price Deputy is free and doesn’t require registration or a Shoeboxed account. Instead, the program is a standalone service that works just by emailing a copy of a receipt to pricedeputy@labs.shoeboxed.com.

For now, this works with e-receipts, but the plan is to extend support for Price Deputy to paper receipts going forward, as well as integrate the feature into all Shoeboxed account types after a beta-testing period. The company says this integration is expected in the next two to three months after they work out the bugs and kinks.

Following the debut of Price Deputy, Shoeboxed is planning to introduce other new Labs products every two to three months from now on, giving it a way to test other things that don’t fall into the B2B sector. Most of these, like Price Deputy, will eventually be included in the Shoeboxed core service at some point if customers find them useful.

The company warns that, although there is no specific limitation in terms of what it’s capable of matching regarding vendor or product selection, the service is still in beta trials and is ramping up its matching technology as more submissions arrive. There may be times when it will take two or even three tries to correctly identify all the right items on the receipts, we’re told.

Tools for price comparisons ahead of purchasing are fairly common, but there are fewer services that alert you if you missed out on a deal after the fact. Another venture-backed company called Slice is one we’ve covered previously, which digs into email inbox data to let you know if prices drop after purchase. But Slice looks for price changes on the merchants’ side – it works only with eligible merchants, such as Best Buy, Home Depot, Nordstrom, Zappos, REI, Buy.com, and others. Another, OneReceipt, reminds you when return policies are about to expire, but stops there.

Shoeboxed’s Price Deputy is different because it taps into raw data customers are sending in (without, obviously, disclosing personal information about purchases). The information on the price changes comes from the actual prices people are paying in the real world, not from merchant-provided data.

Shoeboxed is one of the earlier players in the online receipt-scanning space, having been founded back in 2007 in the Raleigh-Durham area in North Carolina. While the company doesn’t disclose its revenue figures, it did become cash-flow positive this summer, and says its three-digit annual growth rates continue as it gears up for its next stage of growth.