With the release of iOS 7 to the general public, Bing now has a prominent home inside of Apple’s chief operating system. When you Siri, you will very often Bing. That might sound odd, but Apple is more concerned with Google at the moment than Microsoft — especially given Apple’s lack of an enterprise services business — so Bing it is for its search needs.

Apple could build its own search engine, but why spend $10 billion when someone else already has?

Today, Microsoft, trumpeting the Siri integration, announced an update to its standalone Bing iOS application containing a number of feature improvements that should help current users better find the stuff they need out on the Internet. These changes come on the back of Bing’s massive redesign, that saw it cut its column interface design from three pillars to two.

In the updated Bing iOS application, users will now be greeted with four tiles on the main screen of the app. The tiles — Weather, Popular Now, Nearby and Images — are designed to get users information without forcing them to type. Provided that you just want information, and now, they could be good options. They are an obvious mirror of the Bing functionality that is provided by Local Scout in Windows Phone. 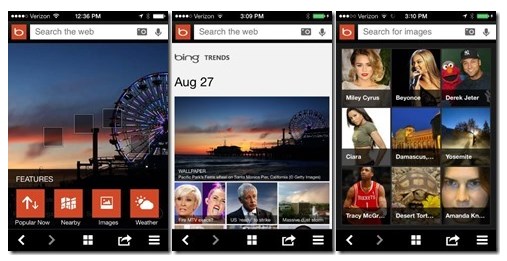 The new Bing iOS app also allows users to share images that they found in the app to — you guessed it — Twitter and Facebook. A new menu will also allow for syncing saved images and screenshots to SkyDrive.

The update is modest, but important as it is Bing now playing on what could be called its home court. Microsoft yesterday detailed how key it is for it to control its own platforms, as then it can push its own services.

However, in iOS, Microsoft has secured a prominent role for Bing on the second-largest mobile operating system. That combined with its comfortable lodging inside of Facebook, and you have to respect at how effectively Microsoft has pushed Bing into parts of the mobile technological web.

You can grab the new Bing app here.