Is FWD.us really making a difference? Today it released its first quantified stats on its contribution to immigration reform, announcing that it drove 33,500 calls to Congress this summer and a total of 125,000 actions including social media shares. That’s not a stellar call count, but it represents solid work by the political action group founded and funded by tech leaders like Mark Zuckerberg. In passing immigration reform, every little bit counts.

The quantifiable look at FWD’s impact comes after sustained criticism of its strategy to do whatever it takes to pass immigration reform. It’s been most maligned for buying campaign ads for right-wing Republicans, such as Paul Ryan, who commend them for supporting scorned initiatives like the Keystone XL pipeline. FWD defends the practice as necessary to convince GOP members that if they vote for immigration reform, they’ll have help retaining their office.

But FWD also focuses on direct lobbying and grassroots efforts like pushing people to call their House representatives. That’s where the tech know-how of its team comes in. Unlike many campaigns where organizations ask volunteers to look up their local representatives’ phone numbers and call, FWD simplified the process by simply asking supporters to enter their own numbers. FWD would then call them, give them a quick brief about what to say to their rep’s office, and then instantly patch them through.

It’s not brand-new technology, but that tool helped it route 33,500 calls to members of Congress between August 1 and September 10. FWD tells me 110,000 total people have taken action on behalf of the group, including making calls, tweeting at or emailing Congress, or sharing resources to social media. During Congress’ August recess, FWD drove a total of 125,000 actions.

FWD’s president Joe Green tells me “We’ve been inspired by the response.” However, in the grand scheme of political call drives, 33,500 isn’t as impressive. 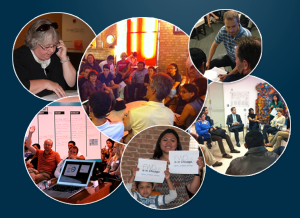 Now to boost the number in the future, FWD is launching a formal membership program aimed at keeping supporters engaged. It asks members to take two actions per week to support immigration reform. In return it’s offering access to strategy briefings, special events, prizes and meetings with FWD founders.

Is all this grassroots activity actually bringing immigration reform closer to passing in the House? That’s more complicated. FWD’s stance is that all of its efforts are steps on the road to reform, and it assures me that people in Washington believe it’s succeeding.

Others are more skeptical. For immigration reform to go in effect, it doesn’t need to necessarily win hearts and minds. It needs to persuade hold-out representatives in heavily white, gerrymandered Republican states to actually vote for it. Virginia Republican Representative Bob Goodlatte, the Congressman assembling immigration reform in the House, gave TechCrunch writer Gregory Ferenstein a flat-out “no” when asked if FWD.us was having an influence on Republicans blocking the bill.

Calls to Congress about policy are also believed to be most impactful when they’re about issues flying under the radar than big, salient topics like immigration reform. FWD insists it drove calls to the right hold-out representatives, but many were surely directed to Democrats who already support reform.

While social media support and calls to representatives around the country may be helping some, it might be FWD’s most controversial tactics that help get the job done. If Republican reps are afraid they’ll be booted from office by their constituents for voting for immigration reform, they won’t do it. That’s where the Silicon Valley piggy bank could come in handy. If FWD can assure that the representatives will have plenty of campaign ads extolling their other accomplishments to their districts so they keep their seats, they might be willing to stick their neck out for immigration.