What do you get when you put a pair of board gaming geeks who have worked at NVIDIA, Google, LucasArts, and Ubisoft together in the same room? It probably looks like Tangible Play, debuting at Disrupt SF.

Founded by Pramod Sharma and Jerome Scholler this lean startup aims to mix augmented reality, animated graphics, and audio with traditional board game elements. While this idea isn’t new, Sharma believes his team has created something special.

“In terms of social mission – we really think that we are connecting people through games,” he said. “Every time we demo our product to anyone, we hear that its super-cool. I think part of this is uniqueness and simplicity of the product.”

Sharma worked at Google in the book scanning project and spent eight years managing search and infrastructure. Scholler shipped Ghost Recon Advanced Warfighter and Force Unleashed 1 and 2 for the 360 and PS3. He also built front-ends for Android. They’ve raised $350,000 this far from a team of angels. The company was part of the recent Stanford’s StartX accelerator group.

They launched their product today at TechCrunch Disrupt.

“About a year ago, the idea started when Pramod realized that his daughter has a lot of physical games / toys with very limited play lifecycle, while the iPad has unlimited entertainment power. We asked ‘How can we bring the long lasting engagement of iPad games to physical games?’” said Scholler.

“Something magical happens when you can grab things in your hand and can have a shared play experience,” he said.

After a bit of experimentation, Sharma used his computer vision experience to build a working prototype that could use the iPad camera to recognize objects and help play games. Scholler designed the game using his experience at Google. The game requires a very simple stand with a little cap that sits on the top of the iPad. The cap contains a mirror which allows the camera to see the playing surface and interact with the physical world. 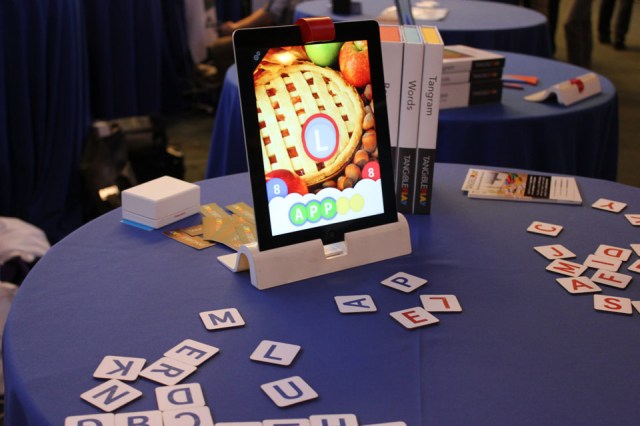 The games are fairly simple. The box contains a set of parts – blocks, letters, and the like – and the app scans the playing surface for the objects. Each game can recognize certain shapes and, in the case of the word game, you spell words with tiles that you place in front of the iPad. The game app instantly recognizes the letters and displays them on the screen.

“The big innovation of tangible play is the elegant design of iPad accessory and extremely sophisticated computer vision / AI software that works with the accessory. It basically enables the development of whole new category of apps. We decided to focus on games right now but in future it will enable all sort of applications,” said Sharma.

The game will launch with two titles, a word guessing game and a puzzle game called Tangram. In its first incarnation the pair watched a mother and daughter play the world guessing game for an entire hour. They knew they had a hit.

“Our current focus for the project is to launch these two games and then open up the platform,” said Sharma. Once these titles gain a bit of steam, it will be fascinating to see Candy Land powered by robots or Connect Four that watches you in your sleep.

If you’re interested in signing up for the beta, head to www.tangibleplay.com.