U.S. weather app maker WeatherSphere, a bootstrapped startup based in Mountain View which has around 1.7 million users across six extant apps and turns a profit, is launching a new app called TurnCast which combines real-time and predictive rain and snow data with voice-prompted navigation — so drivers can change their travel plans based on what’s going to fall out of the sky up to two hours in the future.

The app, being demoed here at TechCrunch Disrupt’s startup alley as a feature in one of WeatherSphere’s existing apps (ahead of its standalone launch, due in three weeks), beats crowdsourced weather alert services like Waze (and indeed Google Maps) by offering a predictive alert capability at street level, not just real-time weather notifications.

“Lots of people get stuck in snow storms every year because they didn’t know the weather when they started. So, if you’re sitting in San Francisco planning your trip, this application will tell you that you should take this different route; go via South Lake Tahoe, instead of North Lake Tahoe, because it knows that it will start snowing after two hours,” founder and CEO Raghav Gupta tells TechCrunch.

“Even if you look at the weather right now, or the traffic right now, it’s not backed up at all. So Google Maps and Apple Maps will take you the straight route. But this application will tell you to take a different route. And if you’re driving along and the weather changes it can reroute you, based on weather.”

How accurate is TurnCast’s predictive data? Gupta tells TechCrunch the accuracy is 95% at half an hour ahead, dropping off after that with a prediction cap at two hours — presumably before it becomes too speculative.

The raw weather data comes from NOAA — the key data source for all U.S. weather apps, according Gupta. But WeatherSphere differentiates its offering by applying its own compression and mobile optimisation algorithms to that data. Key differences vs rival U.S. weather apps are the street level predictive capability, higher resolution weather data, and the data being optimised for mobile display (vs rivals’ made-for-TV weather systems that have been ported to mobile), according to Gupta.

“The NOAA data tells you a snapshot of where it’s raining exactly, at about a kilometre resolution. We take that, plus a bunch of other data sources, plus we apply our algorithms,” he says. “Nobody else has the real-time data that we have, not even WeatherChannel. Nobody else has the accuracy on the map, and nobody else has the user experience that we give. Plus we are the only ones doing weather prediction at street level.”

“All other apps you have to see [weather data] only the past. We are the only one who can show you a seamless progression from past to future. This was the number one feature requested by users — ‘tell me where it’s going to go’,” he adds.

The app, which is due to launch in around three weeks on iOS (costing $2), with an Android app to follow, will include spoken updates such as “rain stops after five miles” or “heavy snow fall ahead” as well as the driving directions as motorists are travelling along. It will also include the ability to bookmark map locations — so app users can get rain or snow alerts for frequently visited locations.

Gupta spent six years at eBay in the search team before leaving to work on his own projects — including dabbling in location-based social networking. It was that experience that sparked the idea to get into weather apps, after he noticed how much chatter sprung up around weather events.

“I had lots of users who were discussing weather. It was groups, based upon location. Whenever there was a bad event, people used to discuss about weather,” he says. 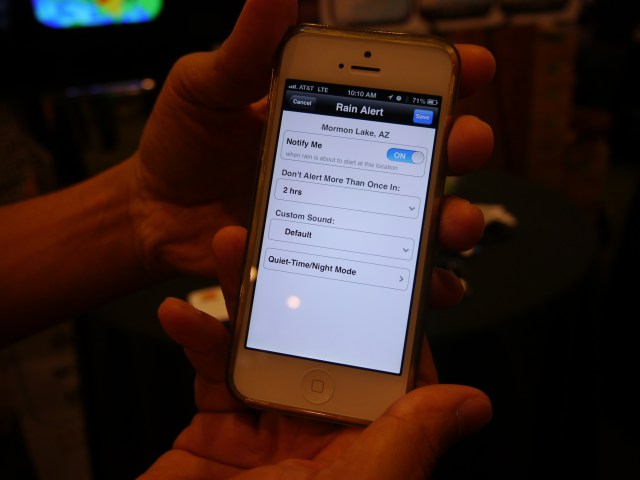