Moglue, the publishing platform that makes it easy to create interactive e-books, has launched its completely redesigned second version, which features a streamlined user interface and more design tools. After the TechCrunch Disrupt Beijing finalist released the first edition of Moglue 10 months ago, many users asked for the ability to preview books in real-time on mobile devices, which the New York- and Seoul-based startup also added.

E-books made using Moglue can be converted into iOS and Android apps and published to the App Store or Google Play using your developer account, which allows creators to keep all of their earnings.

Moglue CEO TaeWoo Kim is especially proud of the desktop app’s new user interface, which consists of MoglueBuilder and MoglueViewer. The latter allows users to preview, share and save content on iOS, Android and the Web. 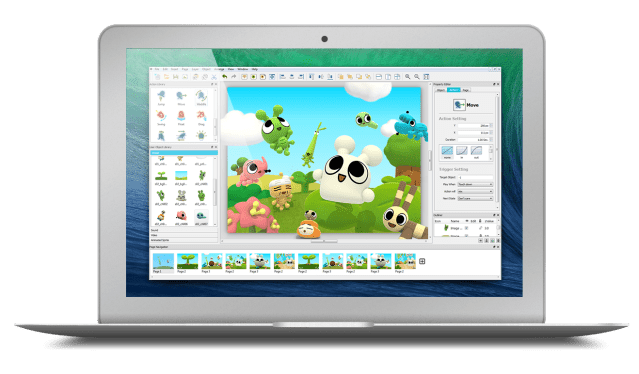 MoglueBuilder “looked kind of amateur before and now it’s much more professional. It’s easier to use and we’ve added feature such as the ability to create layers like in Photoshop,” says Kim. Other tools added to help e-book makers achieve professional results with minimal effort include “parent-child” relationship between objects. For example, if a “parent” object moves, then the “child” moves automatically as well, allowing for more realistic movements in characters. Another cool new feature is the option to add sound-enabled actions to your book.

The e-publishing landscape has changed a lot since 2011, when Moglue’s founders first began conceptualizing the product. At that time, Kim says only large publishers could afford the technology necessary to create interactive e-books and apps. Moglue was created to give individuals and smaller companies the ability to make their own sophisticated, content-rich e-books and apps. The 50,000 users of Moglue’s first version range from an 8-year-old girl to a clothing company that made an interactive catalog. The program has also gained traction in universities that use it in education or design courses, says Kim.

Of course, Moglue’s competition has also increased since it first conceptualized, with programs, including iBooks Author, Habitat and Corona, that were also designed to make creating interactive e-books easy.

Kim says that he will focus on differentiating Moglue by simalteneously targeting hobbyists as well as professional authors and designers. Moglue’s e-book builder is currently $99 for a one-year license, and a much cheaper, streamlined mobile version with preloaded templates for casual users is also in the works. Plans for Moglue’s Web app include the addition of Chinese, Japanese, Korean and Spanish language support.