Facebook knows what you talk about, just like Twitter. But its edge is that it also knows who you are. Facebook’s newest APIs let select news outlets view search and see your public posts, plus it tallies keyword mentions and collects the demographic data of everyone mentioning certain keywords. But it’s confirmed to me that “We see the potential for these tools to be really useful down the line for brands and agencies. That will definitely come in the coming weeks.”

It all started with Facebook Lexicon. Built by one of Facebook’s early data scientists Roddy Lindsay, Lexicon launched to little fanfare back in 2008 and let you see the relative frequency of how often different keywords appeared in wall posts. Similar to Google Trends, you couldn’t see the exact number of times people mentioned “Iraq,” but could see how popularity of the term waxed and waned. I used Lexicon while doing doing research during my Cybersociology Masters degree on why some memes like “Lolcats” stayed popular for longer than others. The vision into our collective opinion was stunning.

Less than two years later, Facebook had shut down Lexicon, and Lindsay quietly left the company this June. But the essence of his work was revived today as Facebook announced the launch of the Public Feed API and Keyword Insights API, and gave access to BuzzFeed, CNN, NBC’s Today Show, BSkyB, Slate, and analytics firm Mass Relevance. The Public Feed API lets these companies search for a word and see a firehose of public posts that mention it. The Keyword Insights API, meanwhile, shows how many people mentioned a word in both public and private posts during a set time frame, and shows a demographic breakdown of the age, gender, and location of these people.

[Update: To be clear, the Public Feed and Keyword Insights APIs fully respect your privacy settings. If you set a post to “public” then news outlets and eventually marketers can see it through the API just the same way as anyone else in the world could. The Keyword Insights API does tap private data, but in a totally anonymized way. It only provide tallies of the total number of mentions of a certain word there have been in public and private posts during a certain time period. No one sees the actual content of your private posts, and your name is never connected to your anonymized demographic data. The headline of this article has been changed from “Your Facebook Posts, Gift-Wrapped In Identity, Will Soon Be Given To Marketers” to clarify this.]

You can call it Facebook copying Twitter again, but that last part could make it a lot more powerful than insights on tweets. Back in 2010, Facebook made one of its smartest moves. It wasn’t a big new product, but a rejigging of how user profiles were displayed. It put all your About info smack dab at the top of your profile. Prompts like “Add your current city” would stare you in the face if you didn’t fill them out, and friends would remind you if you forgot to update your profile with your new job.

And nearly overnight, Facebook collected possibly the most detailed and accurate structured personal data set the world has ever known. That information on your relationship status, education history, languages spoken, and more would become crucial to powering both its News Feed sorting algorithm and its ad engine. It could show you more stories from people you went to college with, and let advertisers pimp wedding photographers to you because you say your betrothed.

Now it’s that data that could give Facebook a leg up in trading the zeitgeist to news outlets in exchange for promoting the social network as a place to discuss world news, sports, television, and other real-time events. If the Today Show uses these APIs to show how many people are talking about Syria and what they’re saying, they’re simultaneously telling their viewers that Facebook is where you should discuss the war-torn country.

Twitter’s been doing this for years — helping TV broadcasters fill out their shows with polls about what people are saying in 140 characters. But Twitter doesn’t require you to provide your age, gender, or any other info about yourself when you sign up. Once you’re tweeting, it hardly asks for anything past your location and who you want to follow. 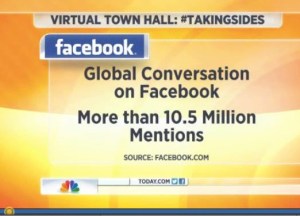 So while Twitter could tell news outlets how many people are talking about Miley Cyrus and what they’re saying, Facebook could show whether teenagers are actually talking about it, or just cranky adults. Or it could more accurately say which of two sports teams’ home cities are posting about them more. Combined with its user base being around five times larger than Twitter’s, structured data could make Facebook a media darling.

A marketing darling, too. Facebook confirmed to me that beyond the news outlets and analytics firms that it announced today would gain Public Feed and Keyword Insights API access, brands and advertising agencies will also get to gander at your conversations. “It’s definitely something we’re exploring,” a Facebook spokesperson told me. It’s not going to be a free-for-all. “It won’t be open to anybody. It’s something we’ll need to partner with people on,” the company said.

I’d bet that Facebook would initially give some of its Strategic Preferred Marketing Developers and biggest brands a first crack at these APIs to see what they come up with. As per Facebook’s trial-and-error strategy, it will probably see what developers and brands find most useful about getting to access to your conversations and then build out that functionality.

At first, that might be better social media listening functionality. By giving brand marketers a peek into News Feed chatter, Facebook could help them brainstorm posts to publish from their Pages. Facebook will have to protect your privacy, but there are still huge opportunities.

The biggest might be in turning the public consciousness into smarter ads.

Right now, Facebook advertisers target you based on the structured identity and interest data in your profile. But in 2011 Facebook tested the option to serve “related ads” that correspond to what you just posted about. Meanwhile, last year’s launch of Facebook Exchange let advertisers reach you in real-time based on the other websites you’ve recently visited.

If you combined ads based on what you’re saying with real-time delivery, you’d have a way to target people with ads about what they’re discussing and when they’re discussing it. That’s how today’s APIs for news outlets could lay out a path to an updated Facebook ads API for efficiently buying keyword-mention-related ads.

For now, expect Facebook stats to pop up more often in your nightly news. If you post publicly, you might even end up famous. Along with other Twitter-style features like hashtags, trending topics, embedded posts, and verified profiles, these new APIs could help convince you to make Facebook your digital water cooler.

But eventually, Facebook’s investment in collecting structured data could pay off big time. Because when advertisers can find out both what you’re saying and who you are, they’ll open their wallets and you might, too.