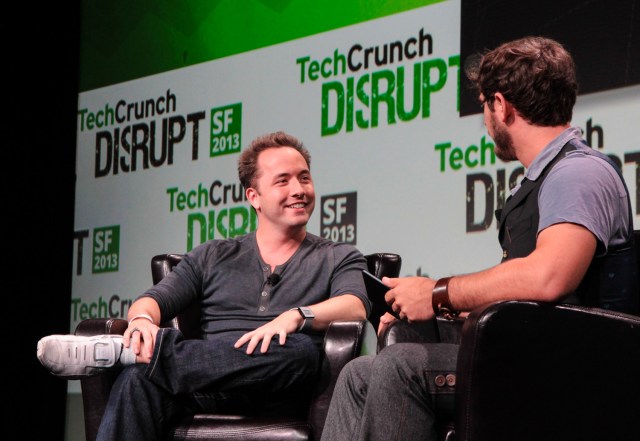 Today at Disrupt SF, Dropbox co-founder and CEO Drew Houston took the stage to share his experiences and give his thoughts on the product, future prospects, competition and more. With 200 million users and a community of thousands of active developers and five years after launching at TechCrunch50, Dropbox wants to become the agnostic storage solution available for every platform.

Dropbox most recently raised $250 million at a valuation of $4 billion. And it has most of that left in the bank, according to Houston. That chunk of money was raised to provide Dropbox with “flexibility” to perhaps avoid the IPO route until it wanted to travel that path.

Essentially, in Houston’s view, IPOs are “distractions” that spend founder and team bandwidth that could be better put to use in other places (think product and support). “We’re enjoying the fact that we can focus on long term,” he said.

For Houston the reasons for going public are twofold: Branding, and providing shareholder liquidity. However, you can accomplish both in the private markets, he claims, implicitly knocking the IPO process as superfluous in certain circumstances.

Valued at $4 billion in the private markets some time ago, Dropbox’s eventual public offering will be tectonic in size. It has to grow into that size. Its revenue is not known, nor is it clear if the company is profitable. However, growth is likely being valued over short term profits for now, so the efficacy of that metric is likely small, for now.

Snowden and the Future of the Cloud

A question that has been key for all providers of cloud storage and services is the impact of the revelations of Edward Snowden, which detail pervasive surveillance by the NSA and other governmental agencies. Those disclosures have led to a backlash – at least in word, if not in deed – against companies that are seen as too lax in their willingness to give up user data to the government.

Houston was essentially coy about the problem, but did state that there is a “lack of transparency” concerning government activity. Dropbox, he continued, has a pretty ironclad privacy policy in place, which details how it handles government requests of that nature. The other side to that is simply the fact that in some data requests, companies are legally required to take part, whether they want to or not.

Perhaps in a too-sweet encapsulation, Houston went on to state that his vision is to create a home for users’ files where he too would want to store his own. That’s fine, but isn’t much of a line against the abrogation of privacy. Still, we can’t expect every technology CEO with a dog in this fight to suit up. And a tangle in the mud with the U.S. government is probably not what Dropbox wants in the year preceding its bonding process with the SEC.

When asked what was one of his biggest regrets, Houston said that the company should have moved its focus faster to mobile. At first, Dropbox mobile apps were jut an extension of the synced folder that you could find on your computers. Yet, according to its CEO, Dropbox has to go further on mobile.

“The disruption that comes from mobile, people are underestimating it,” Houston said. “When we started, mobile was really this extension of this magic folder,” he continued.

iCloud is not necessarily the right way to go. First, it always asks you to pay to get more storage. When you have more than 5GB stored on iCloud, the service sends you an email every day to remind you to delete some files or pay. More importantly, iCloud only works with Apple devices.

“We don’t want to provide another source for music, books or movies”

But iCloud is very efficient when it comes to handling music, movies or TV shows. Dropbox doesn’t want to compete directly on this ground. “We focus on the stuff you’re working on, the pictures you take,” Houston said. “We don’t want to provide another source for music, books or movies,” he continued.

And of course, there’s Mailbox. Dropbox now has the resources to make acquisitions thanks to its $250 million funding round. That’s why the company acquired Mailbox for $100 million in May.

“The team is really amazing,” Houston said. “I’ve been really excited about email for a long time,” he continued. More updates are coming soon, including support for more platforms.

“We’re really picky about [our acquisitions] but we want to get a few of them,” Houston said.

Dropbox has never chosen to be a consumer or enterprise company, it happens to be a tool for both consumers and enterprise users. But the company now wants to focus more on enterprise.

“Dropbox is used in millions of businesses around the world. That organic adoption has worked really well,” Houston said. But the company just hired enterprise-focused employees to take it to the next step. While it remains vague, changes could come to the product that convince more companies to use Dropbox.

Finally, when asked whether he sees a future without himself as Dropbox CEO, Houston’s answer was: “not right now. There is so much that I want to do. This is the best adventure that I can think of.”